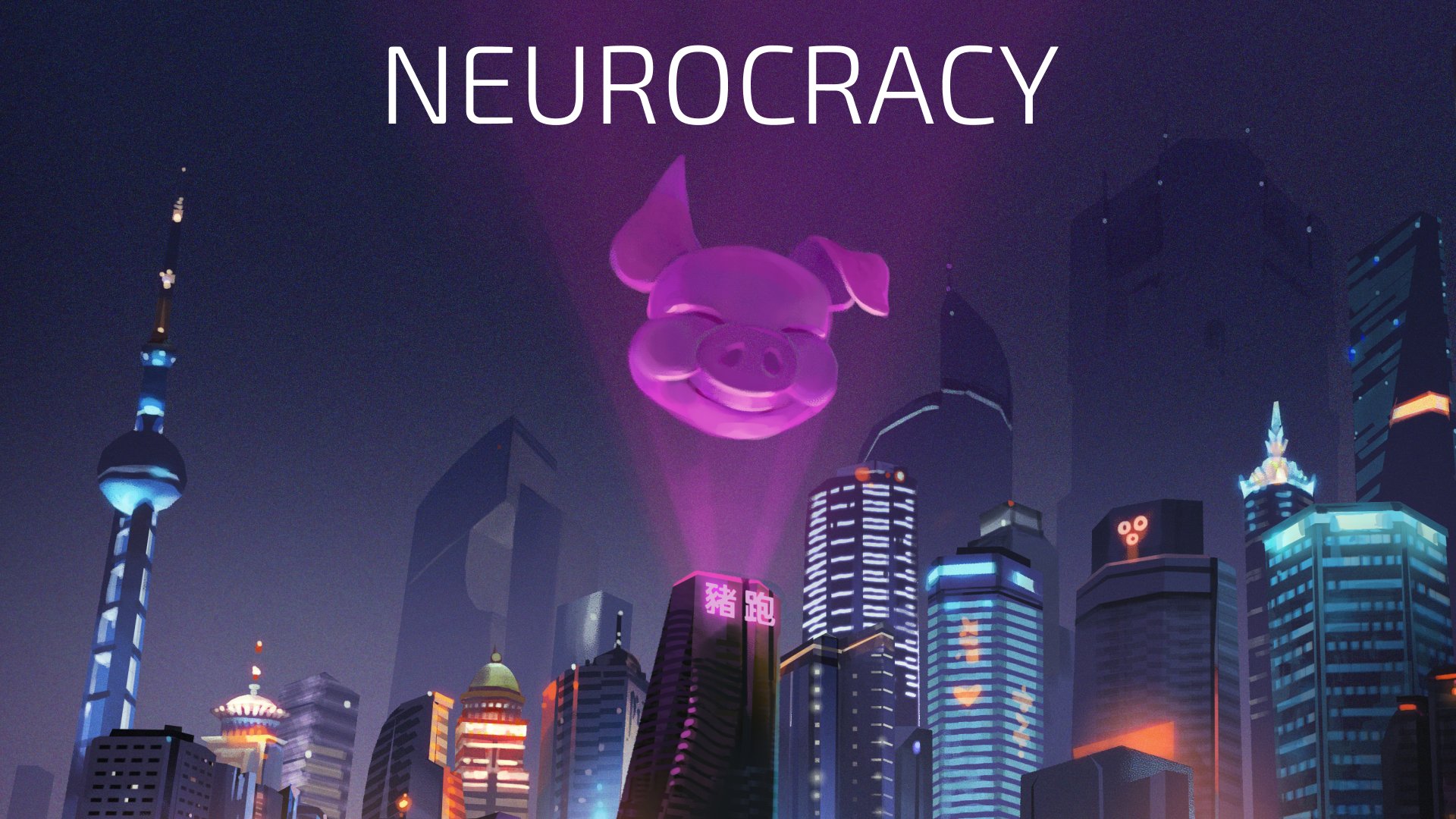 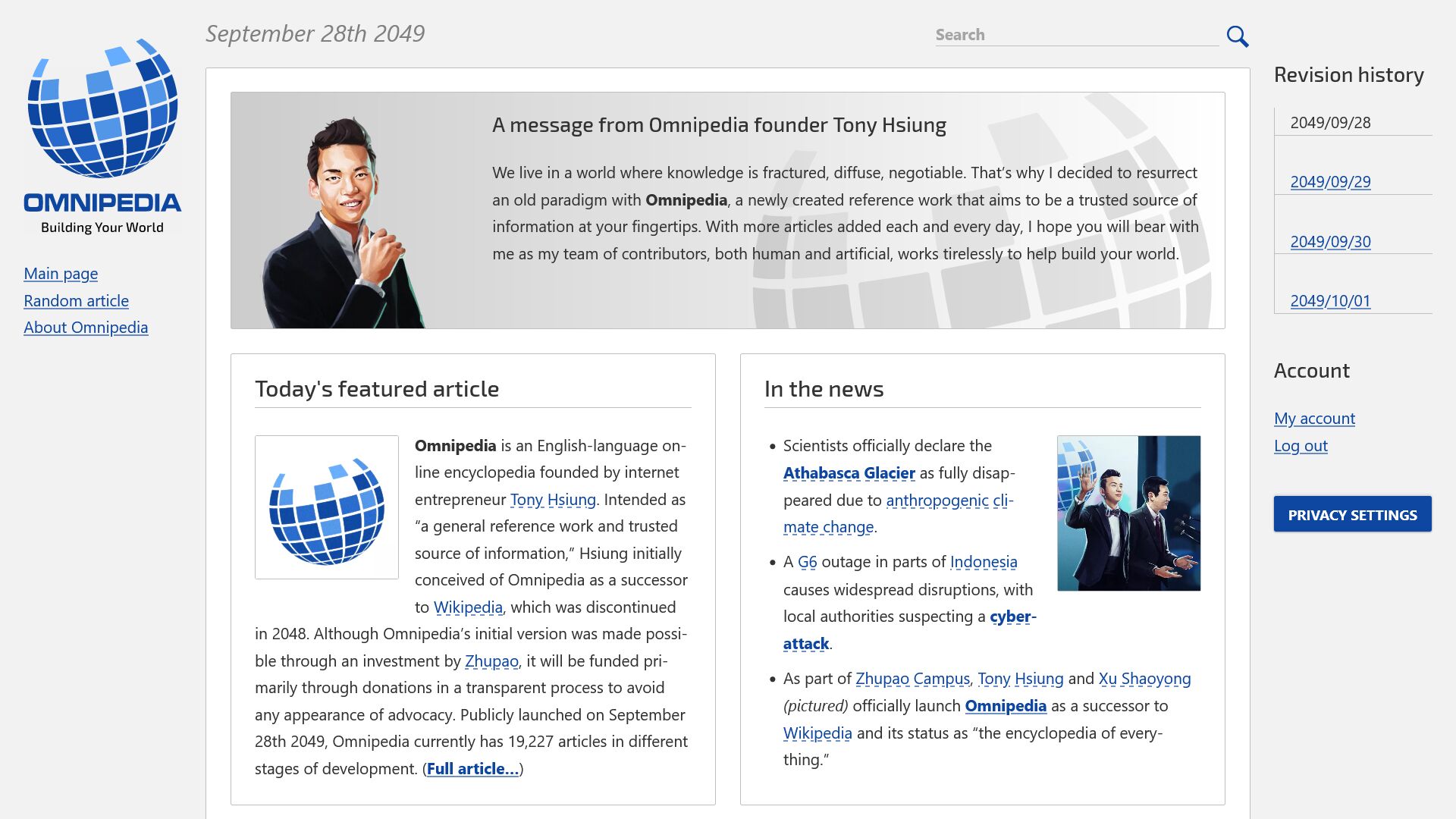 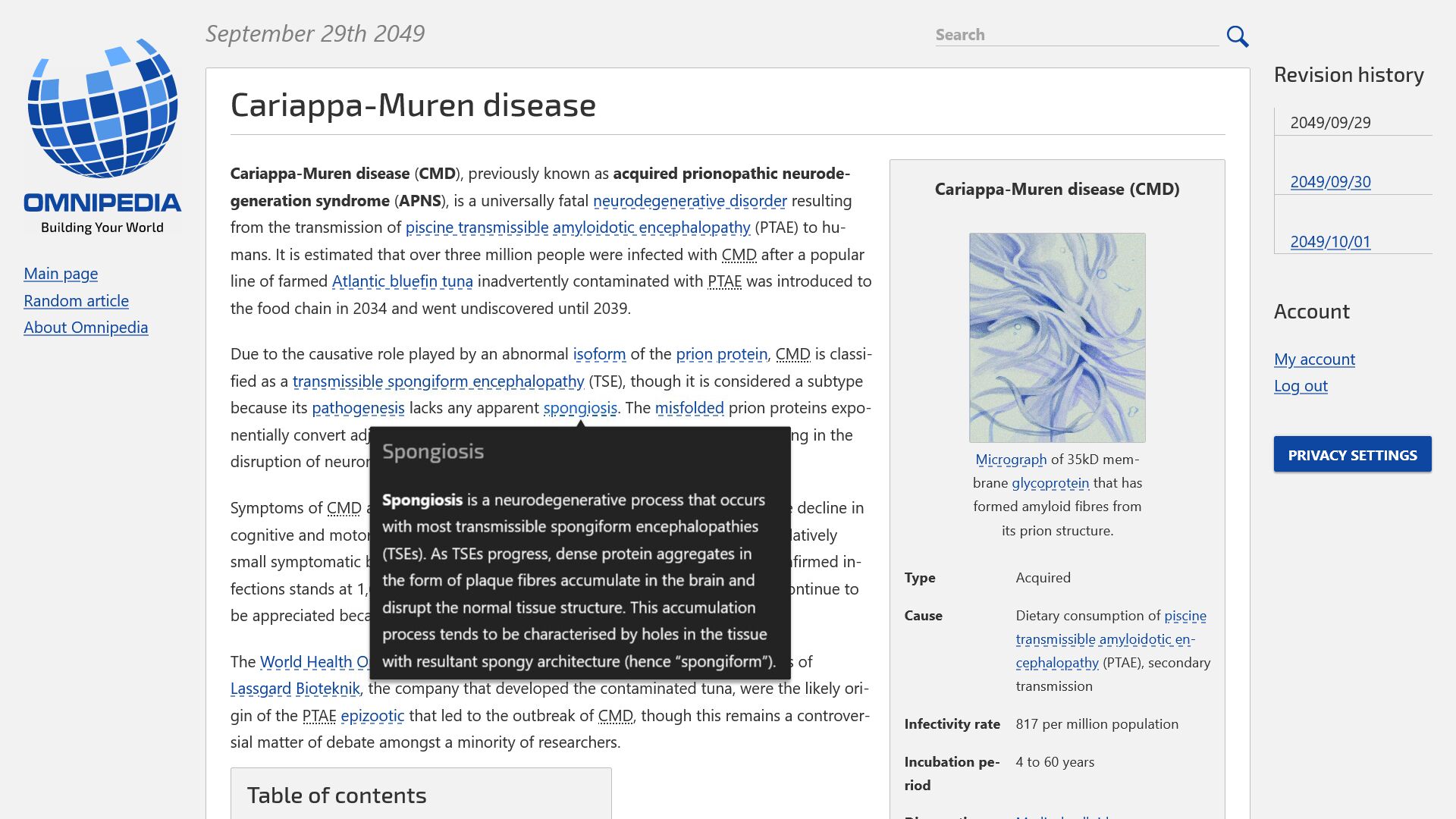 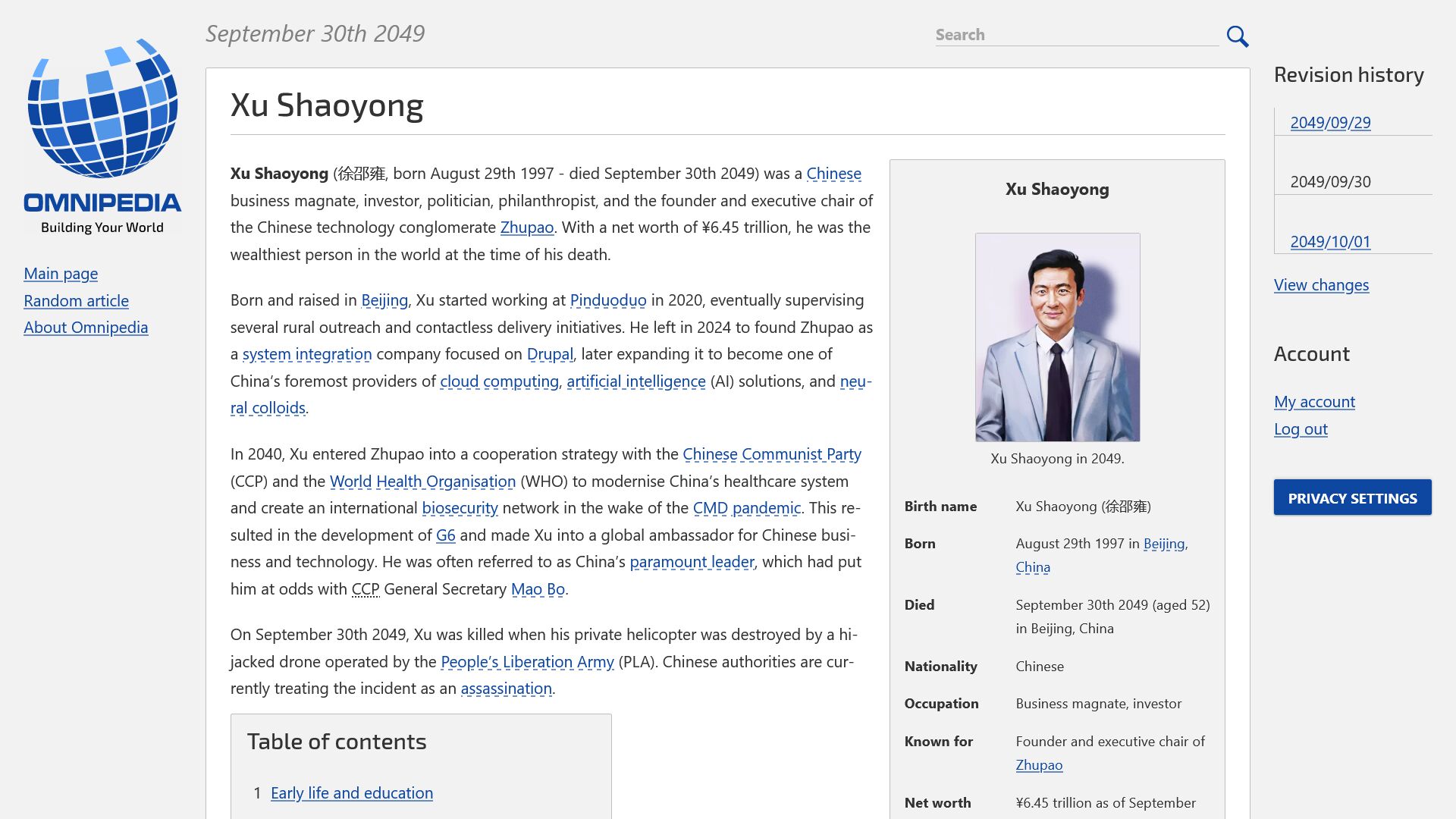 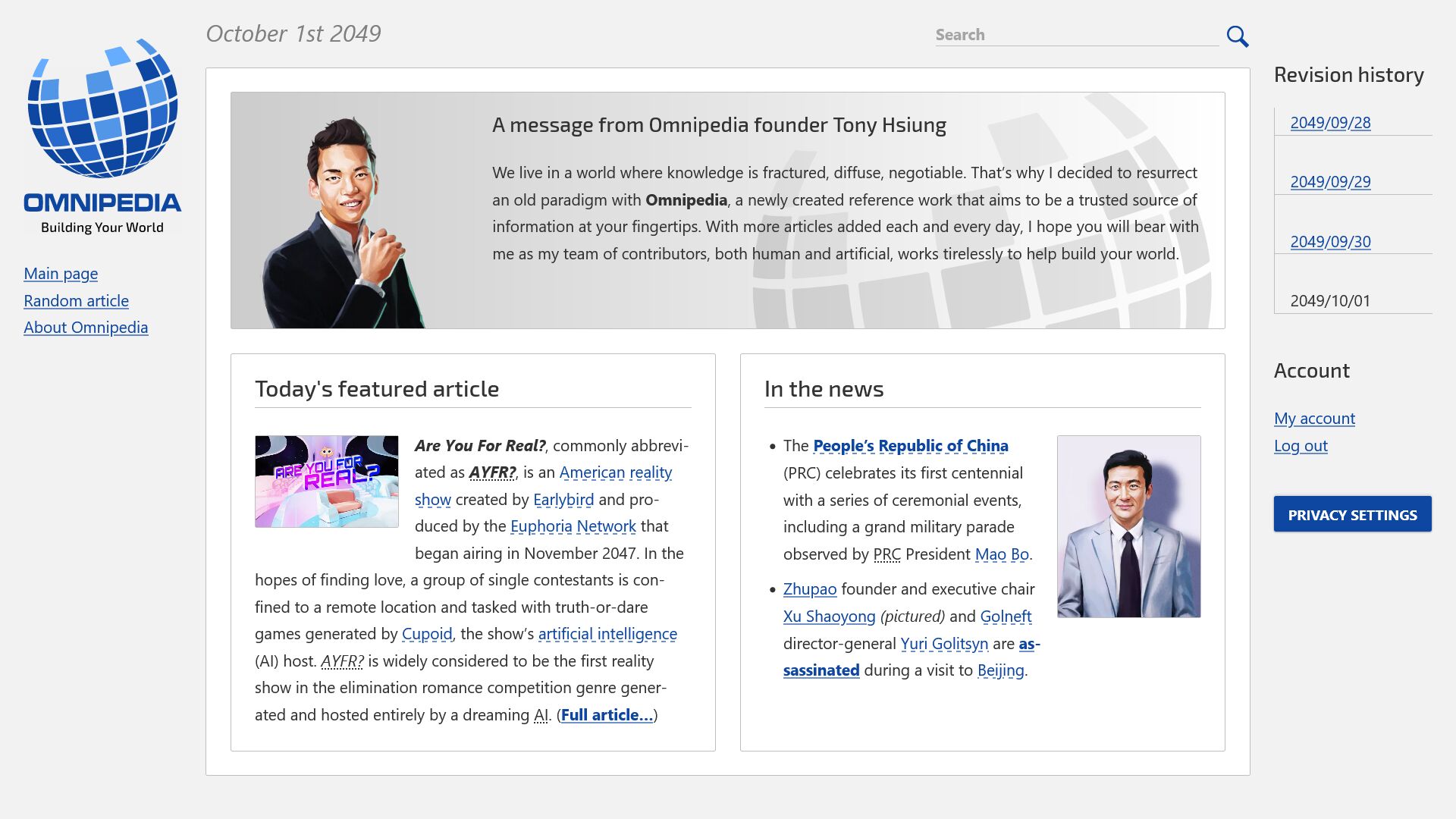 Much to my chagrin, Neurocracydid not leap fully formed from the idea of using Wikipedia as a medium for interactive fiction. When this narrative device occurred to me, I applied it to a sci-fi world that had been taking different shapes for years prior, a process inextricably linked to two of my favourite games: Deus Ex and Half-Life . . . with one teaching me about world-building-as-narrative and the other showing me that, if I wanted to create something of my own, I could go ahead and do that.

An interactive narrative experience that offers an anthology of sci-fi stories through the hyperlinked articles of an online encyclopedia, NEUROCRACY is both a single-player alternate reality game and an epistolary hypertext novel. Joannes Truyens was unable to find a suitable form for a story he had been developing for years, since he could neither program nor write prose. So he decided to organize Neurocracy‘s lore into a wiki. Unwittingly he had stumbled across an ideal form for a futuristic murder mystery that deals with such present-day issues as surveillance capitalism and the power of global mega-corporations. He released this story episodically, a few entries at a time, building a fanatical online audience. Now he’s trying to decide whether to create a second series of stories in the form of tweets, since characters on Twitter are able to communicate with the audience directly.

In 2009, writer/designer Joannes Truyens and web developer Matei Stanca started Playthroughline as a repository for general musings on narrative design in videogames and for a series of movie scripts that poke fun at them. In the following years, those scripts struck enough of a chord for other writers to come in and put together some of their own. Neurocracy is their first independent project under the Playthroughline label. It features visual direction and illustrations by Alice Duke in addition to a range of futurist stories from contributing writers Leigh Alexander, Io Black, Malka Older, Edward Smith, Axel Hassen Taiari, and Yudhanjaya Wijeratne.

“Whether you see ‘Neurocracy’ as hypertext fiction or an offshoot of an alternate reality game, it’s the first project of its kind, using a medium that we take for granted every day. . . . Our new corona-reality shares unnerving parallels with ‘Neurocracy,’ which revolves around all-too-familiar points of modern anxiety: pandemics, billionaires, AI, climate change, and biosecurity in the name of public health. ”
— Alexis Ong, The Verge
“What is more powerful than the murder mystery, however, is the depiction of a world that feels uncannily close to our reality. There is a sense in each entry that what we see there could be just around the corner. This is what excellent science fiction does: it holds up a mirror to culture as it is, and shows us what is just creeping up behind us.”
— Sarah Griffin, The Guardian