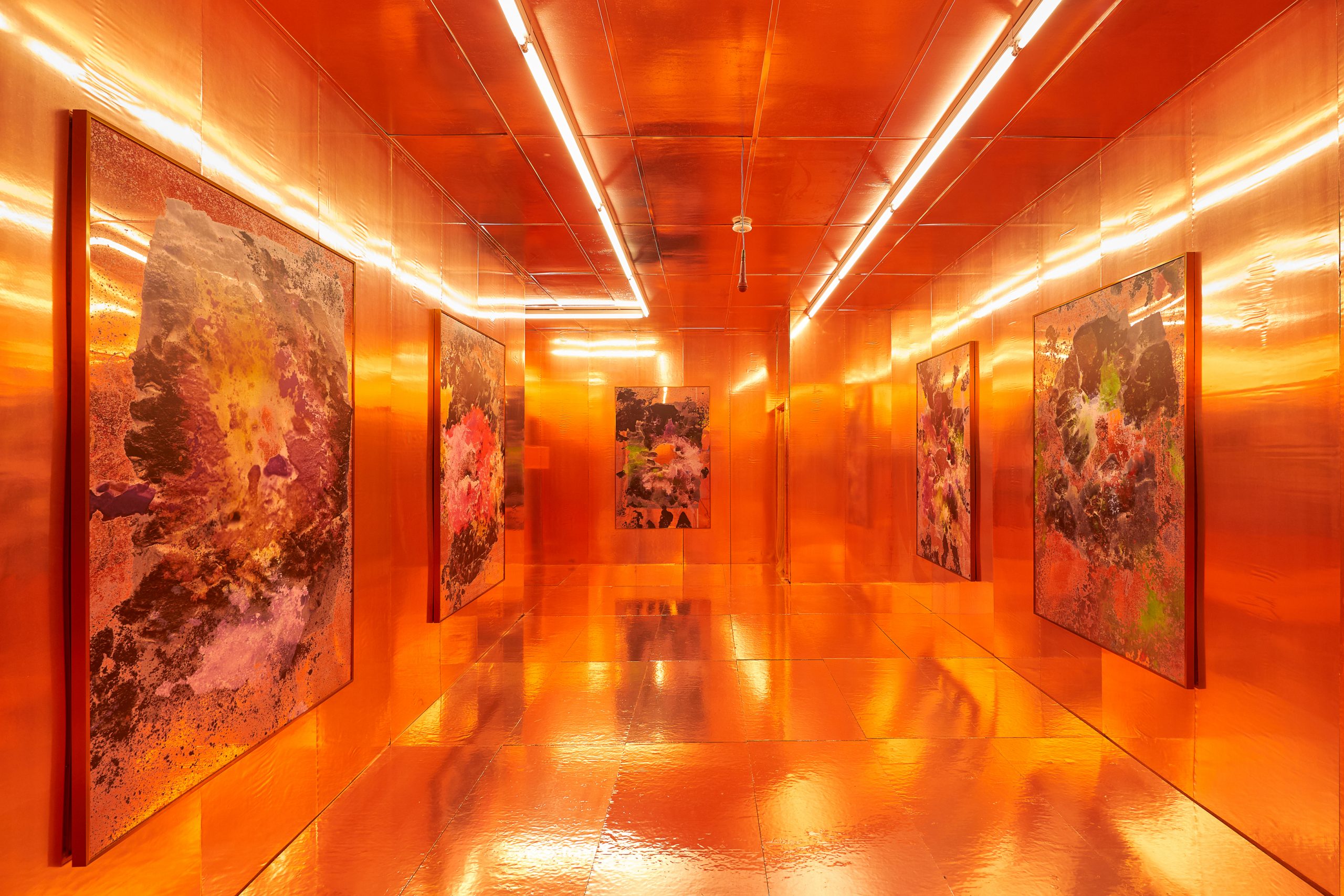 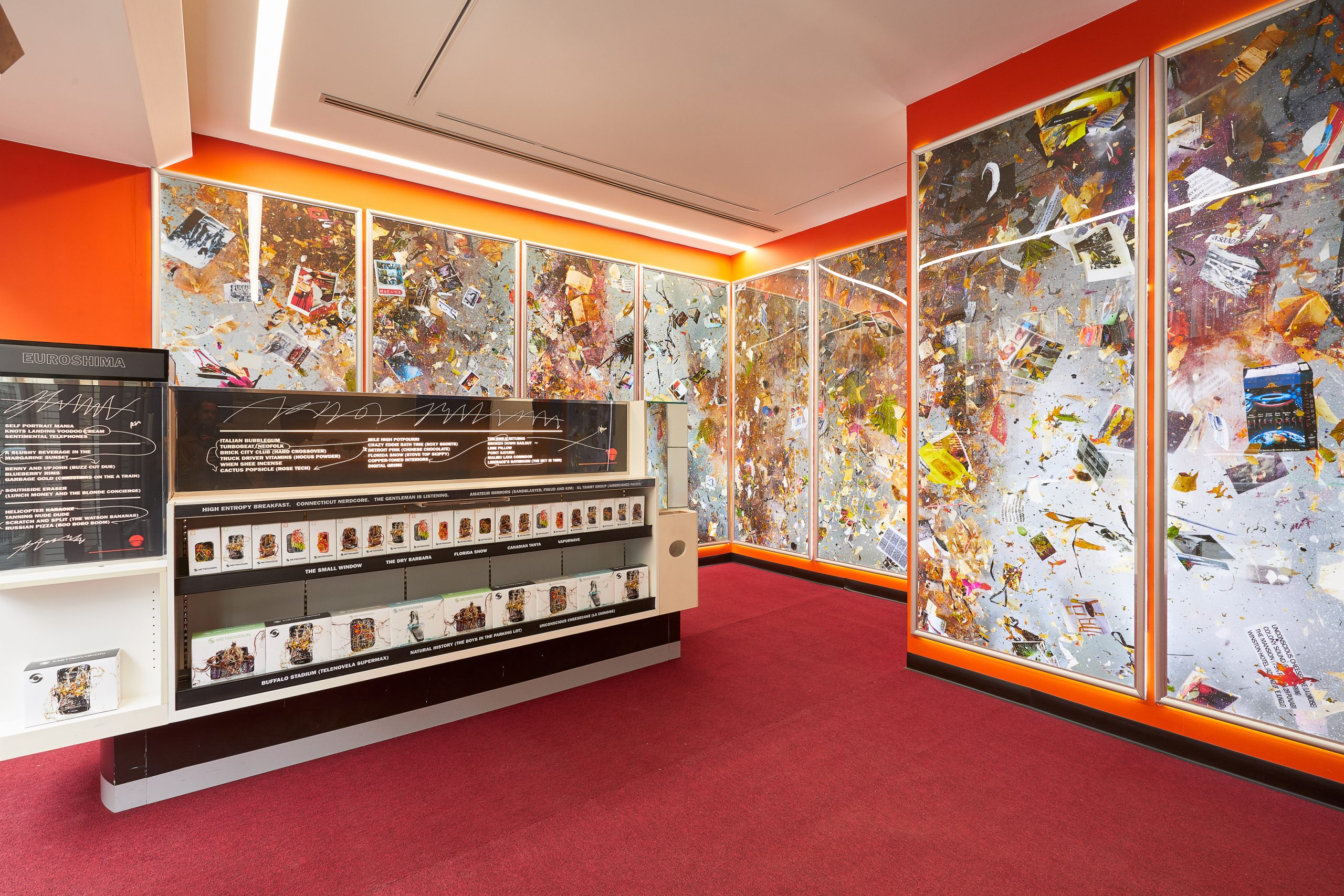 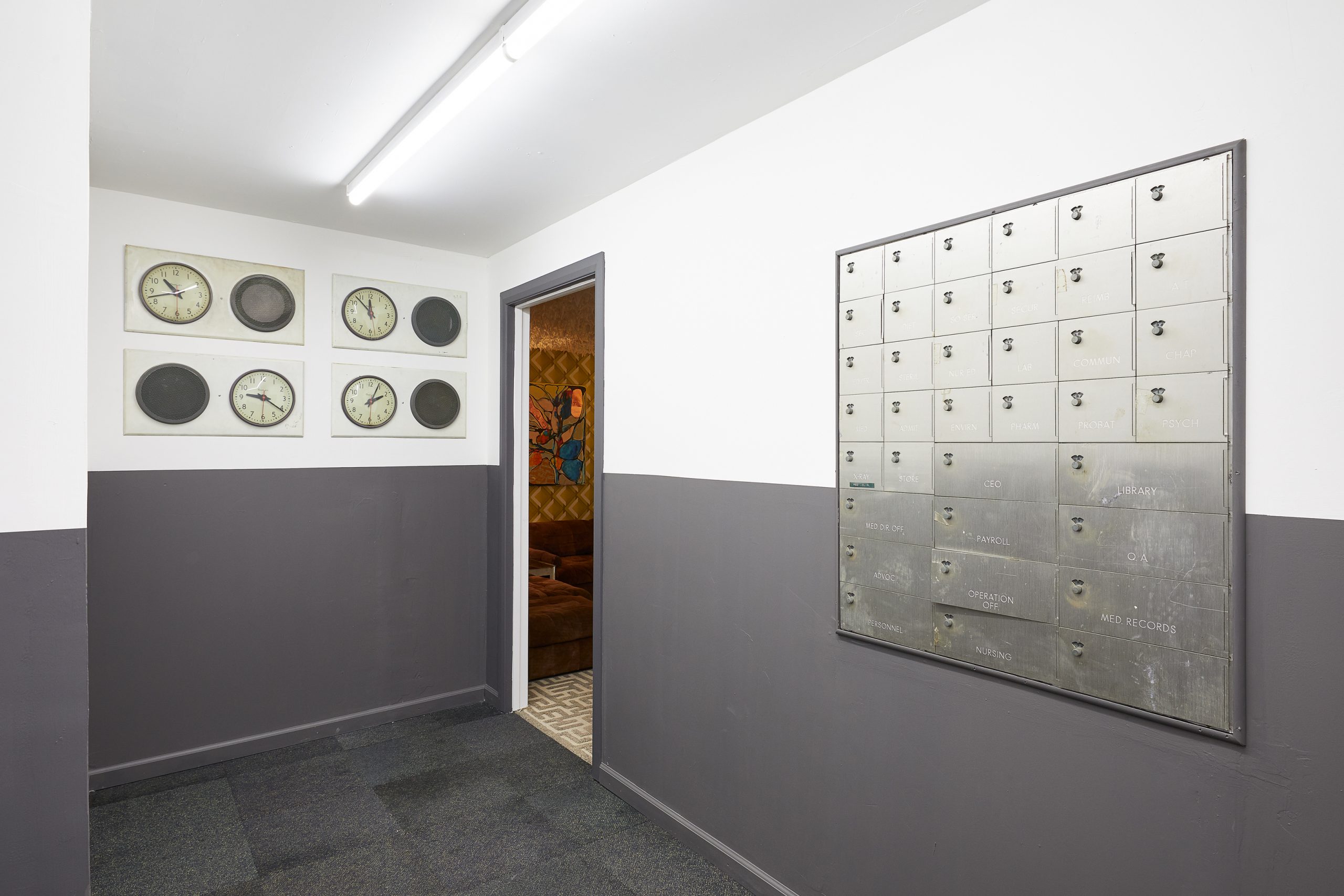 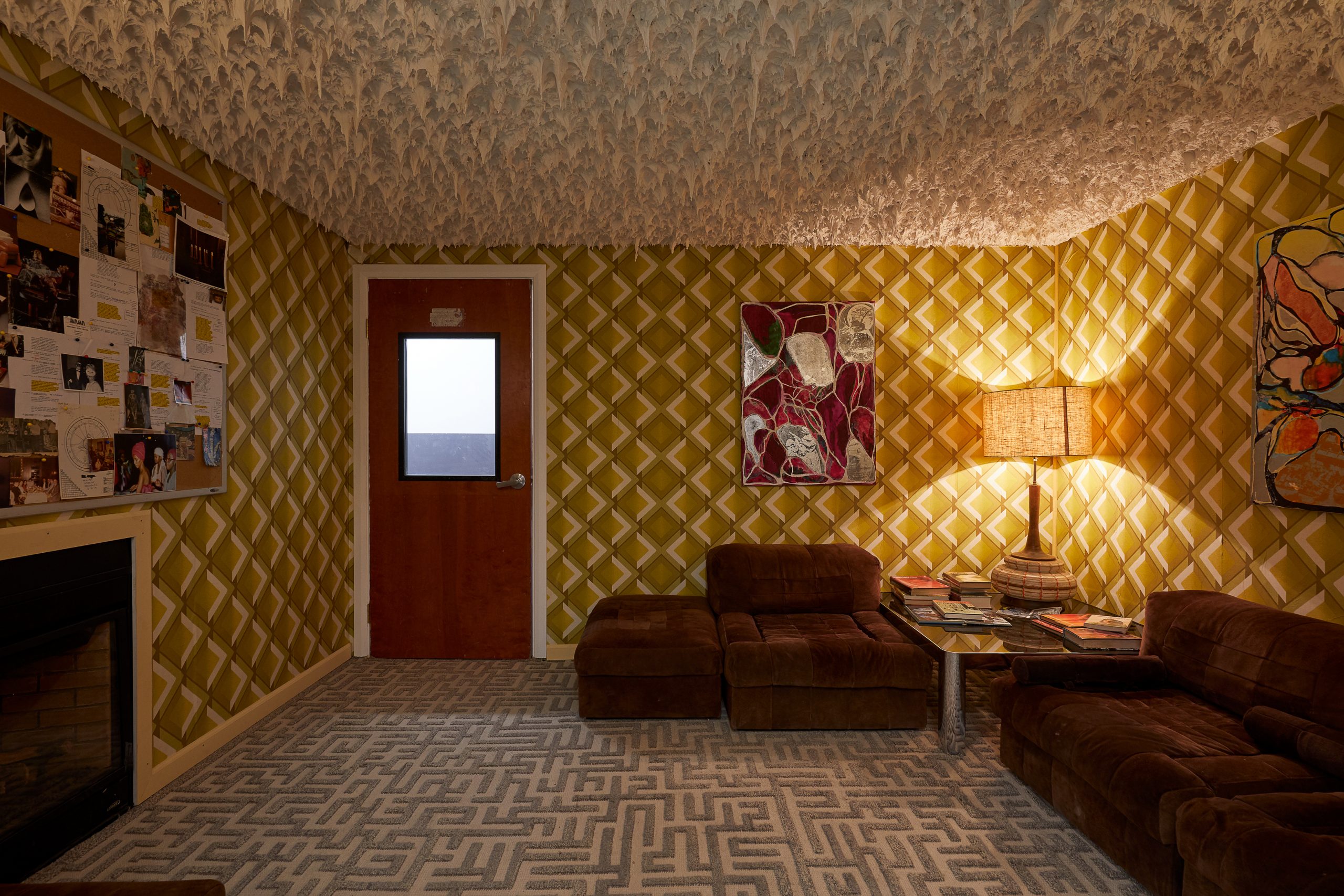 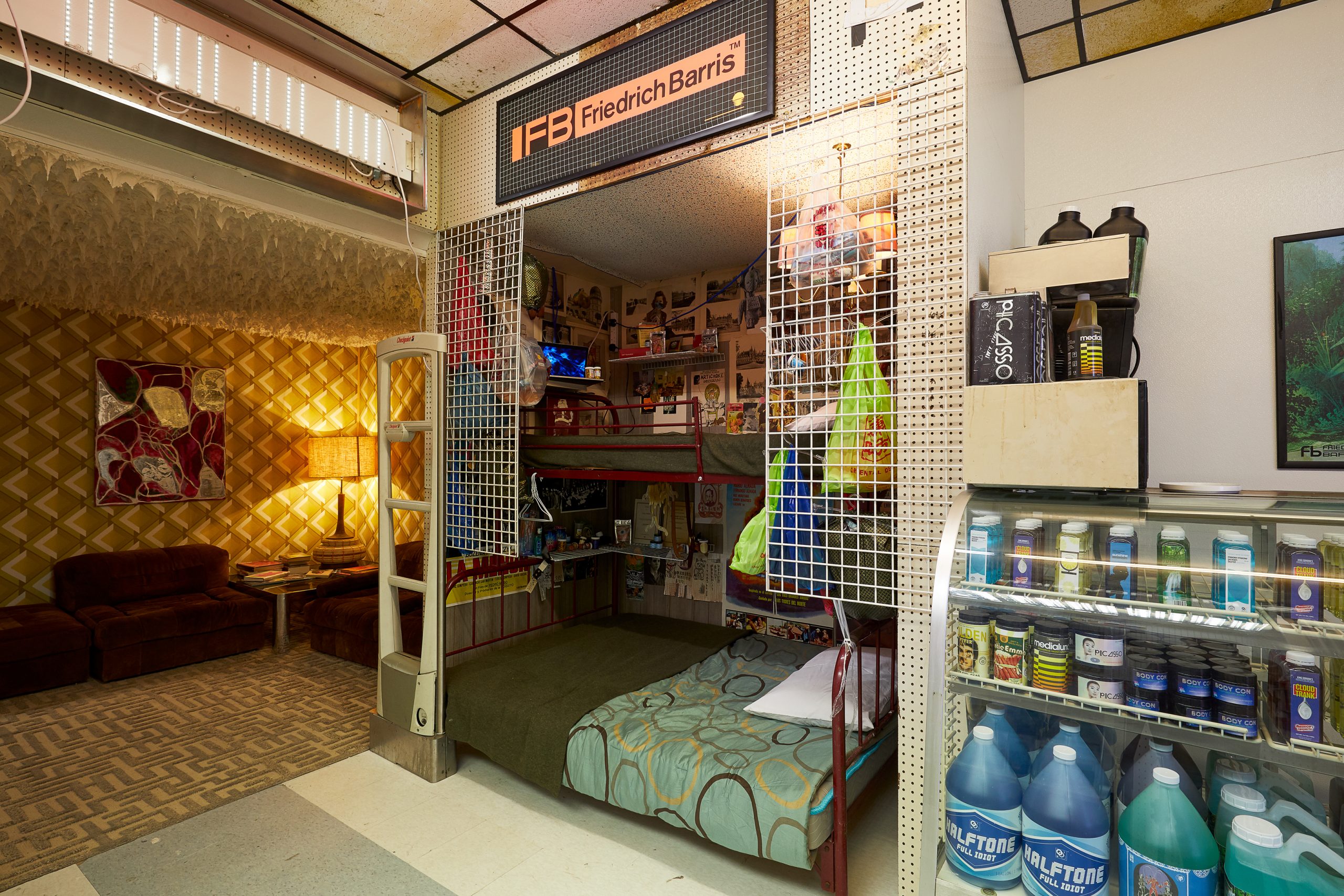 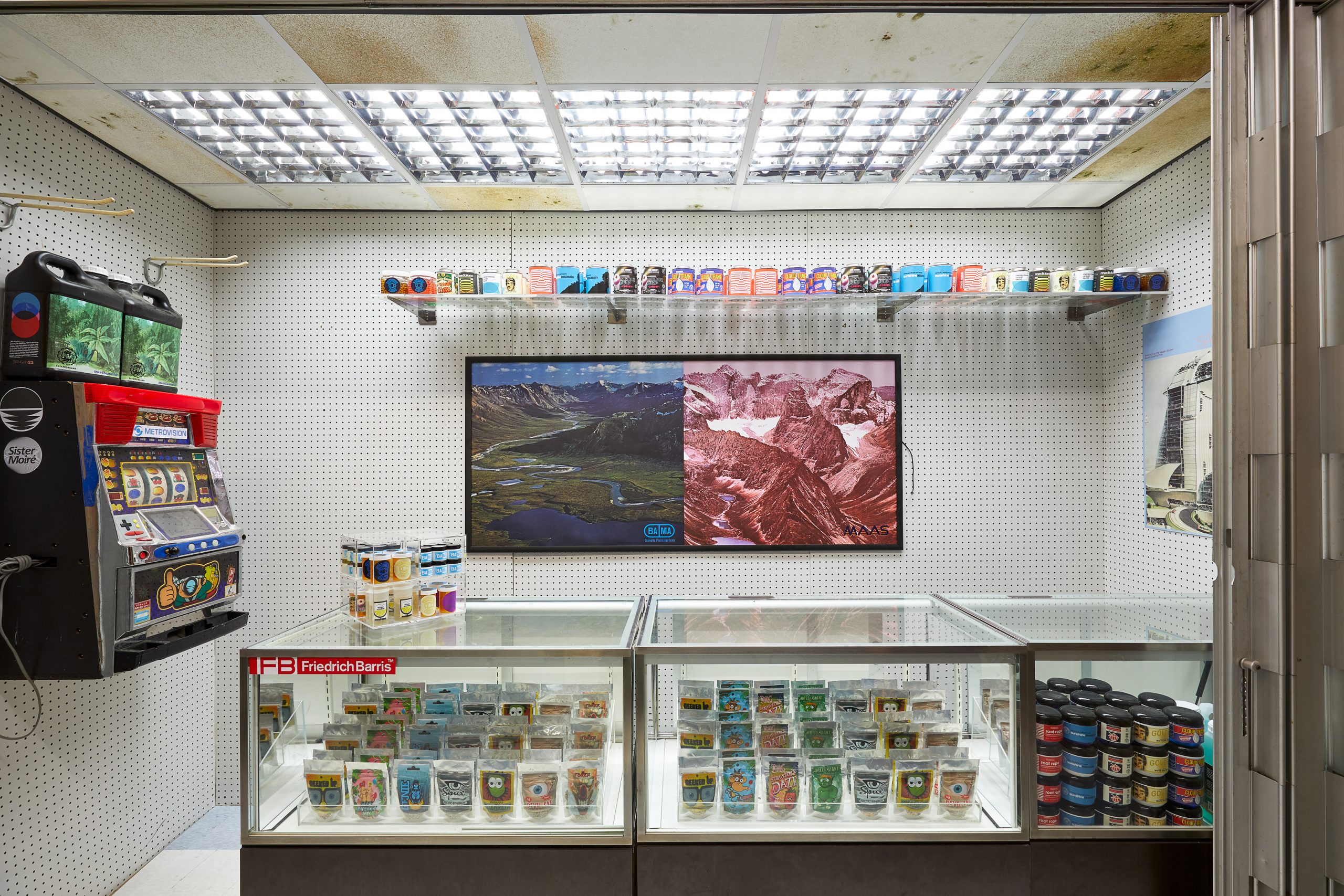 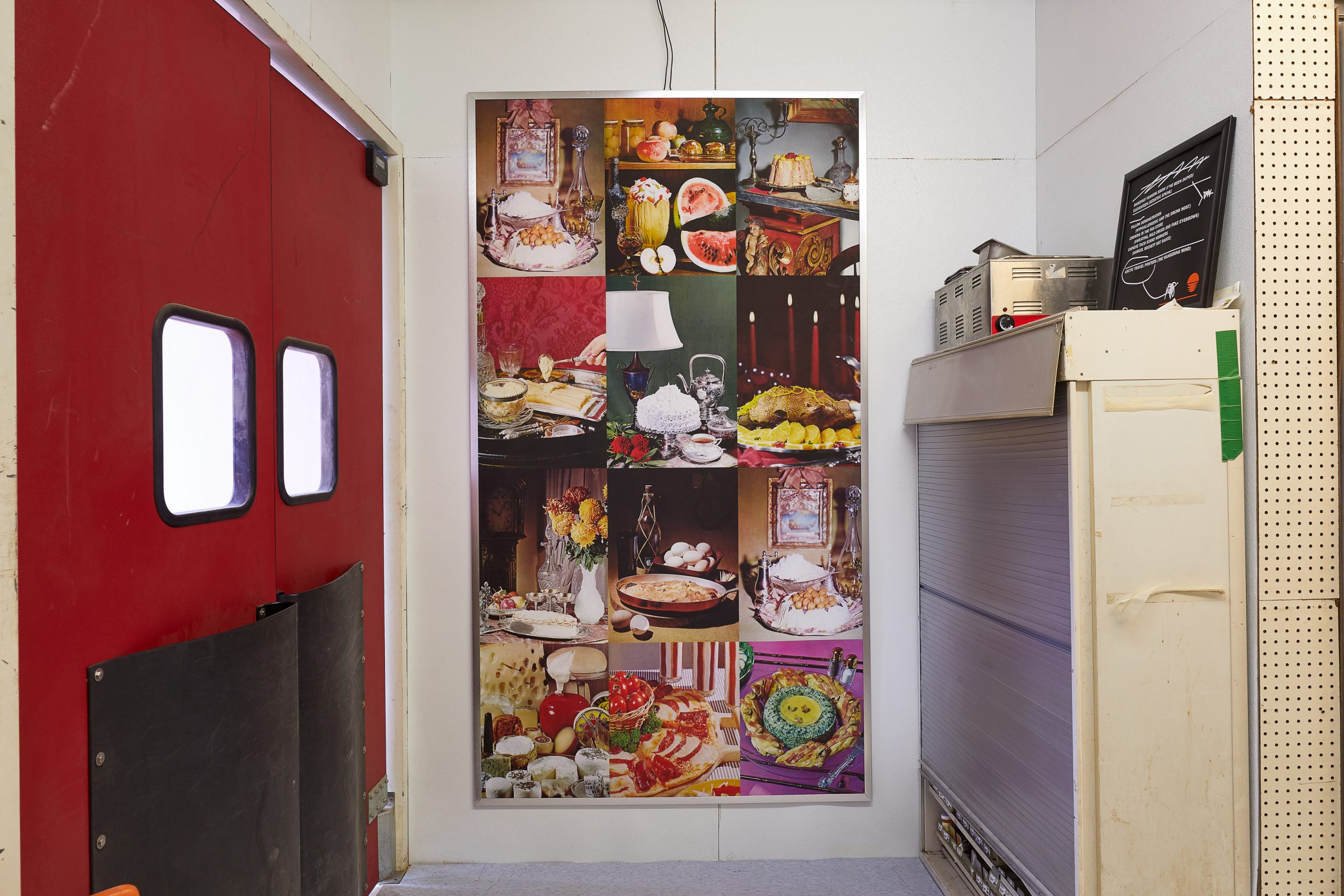 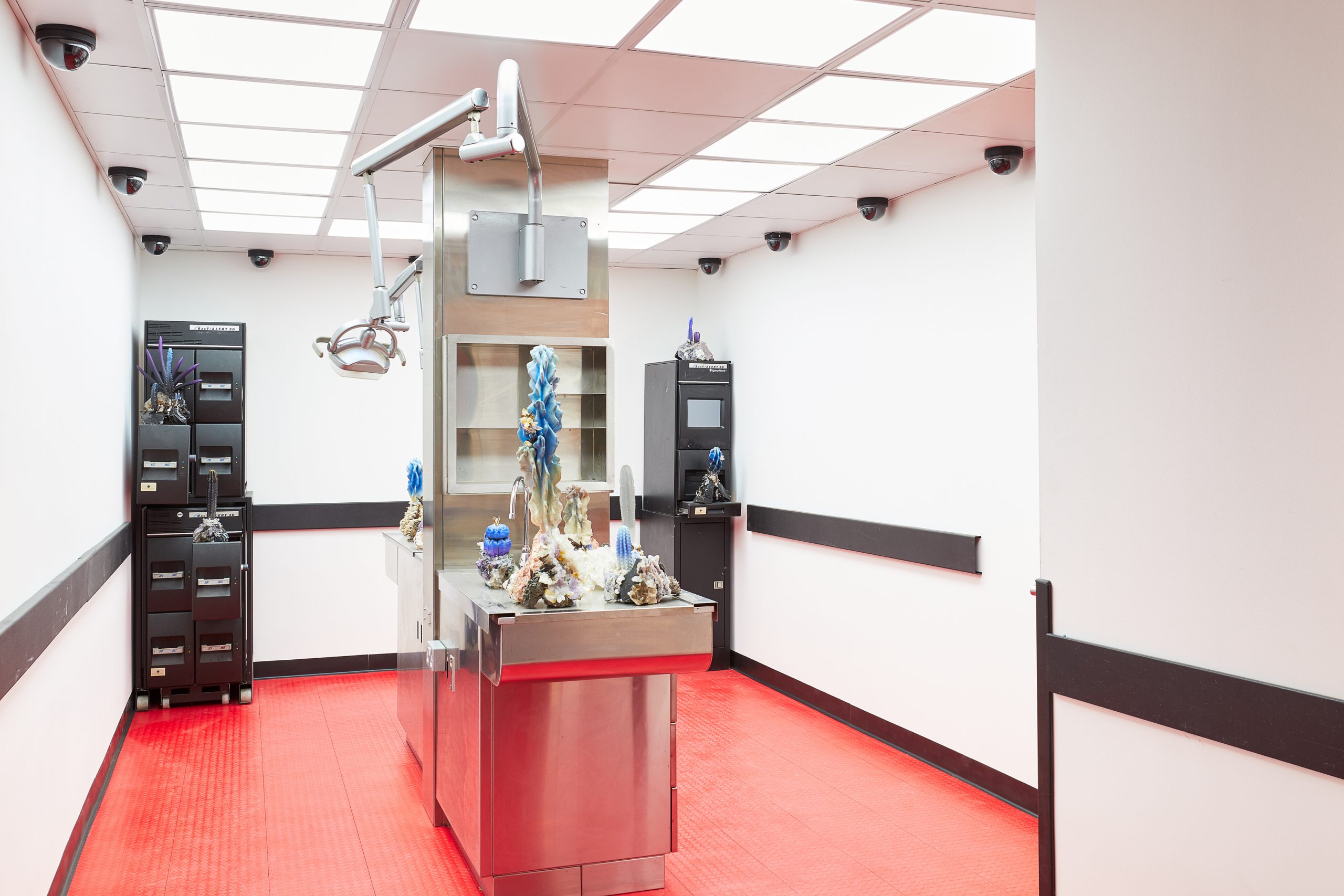 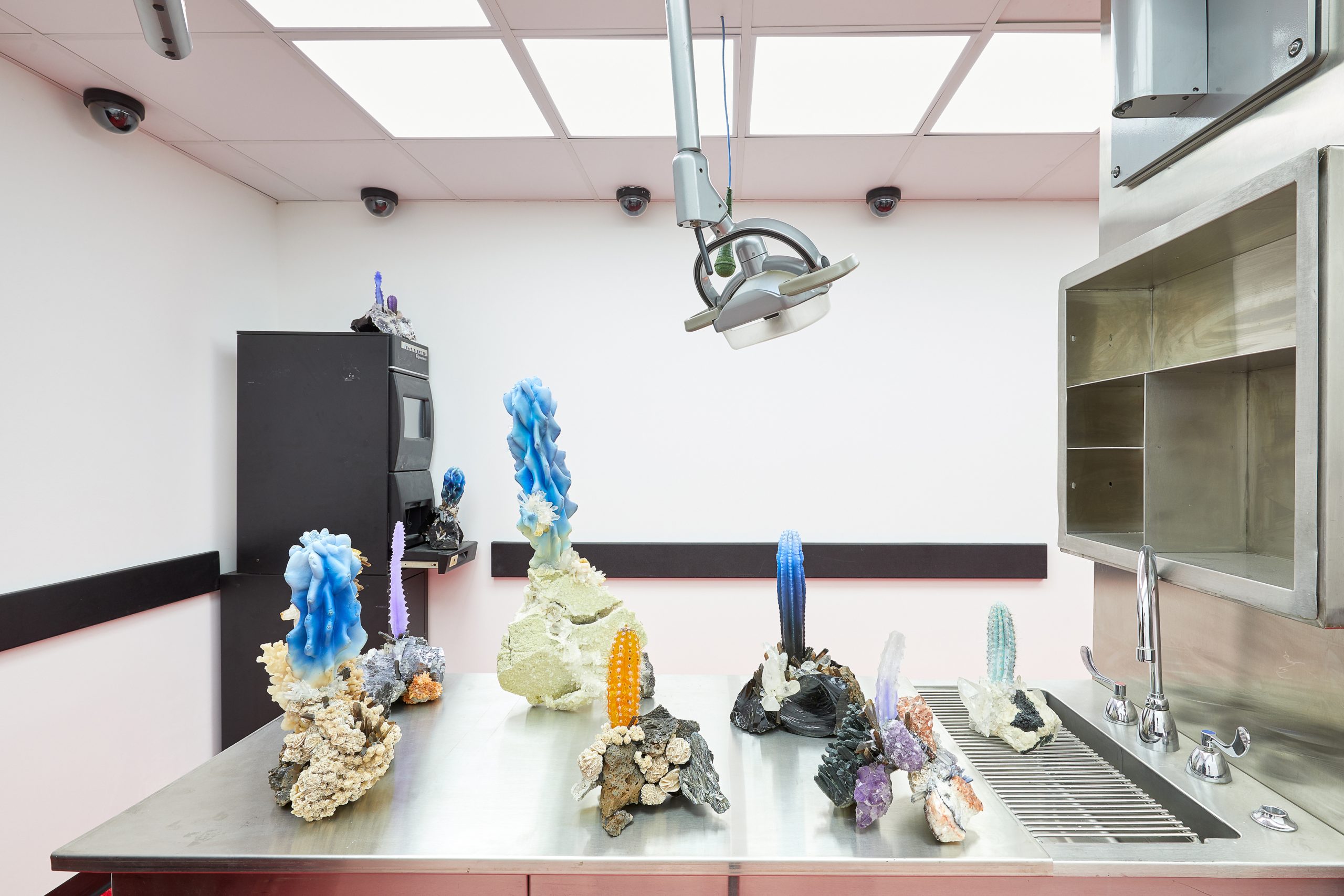 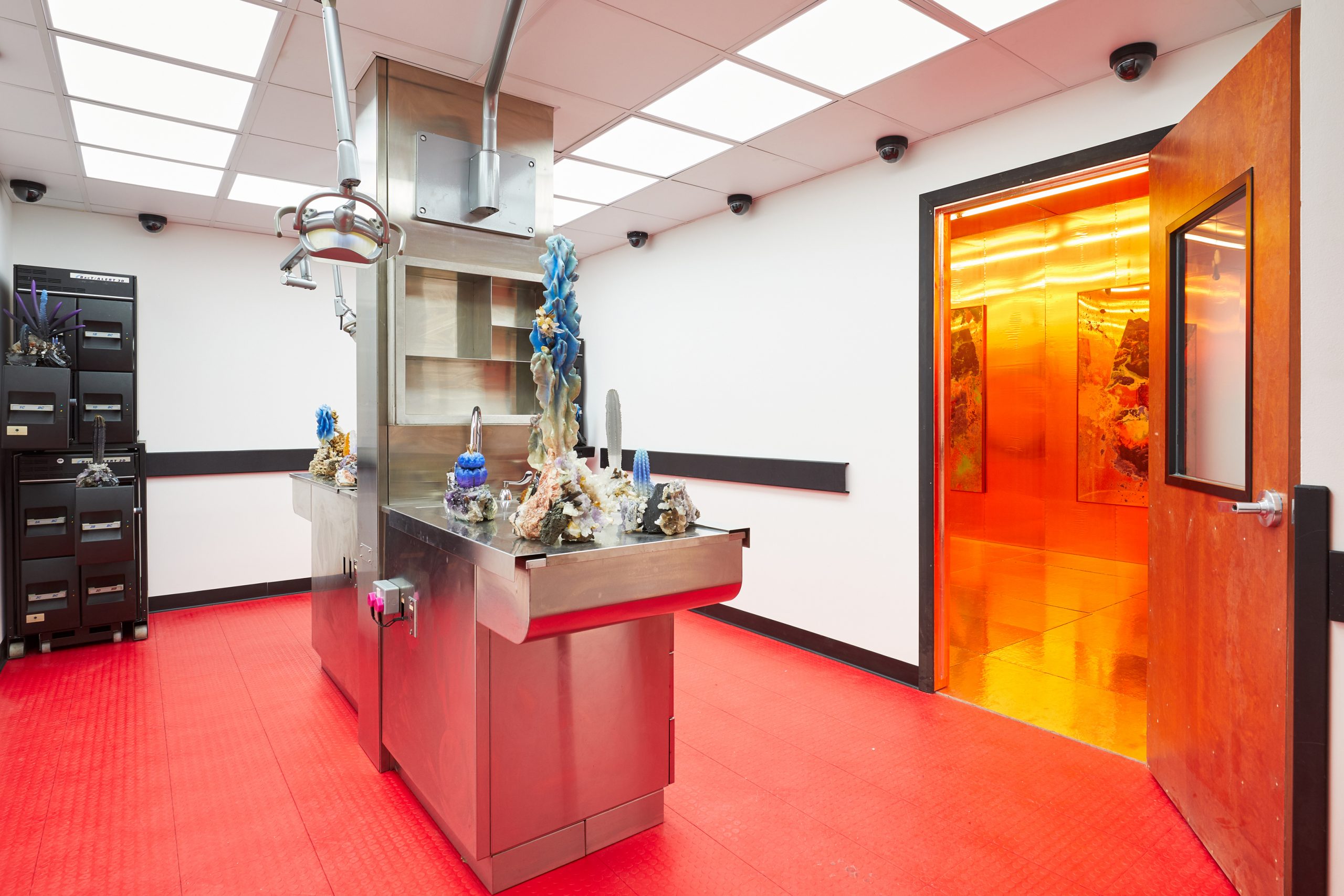 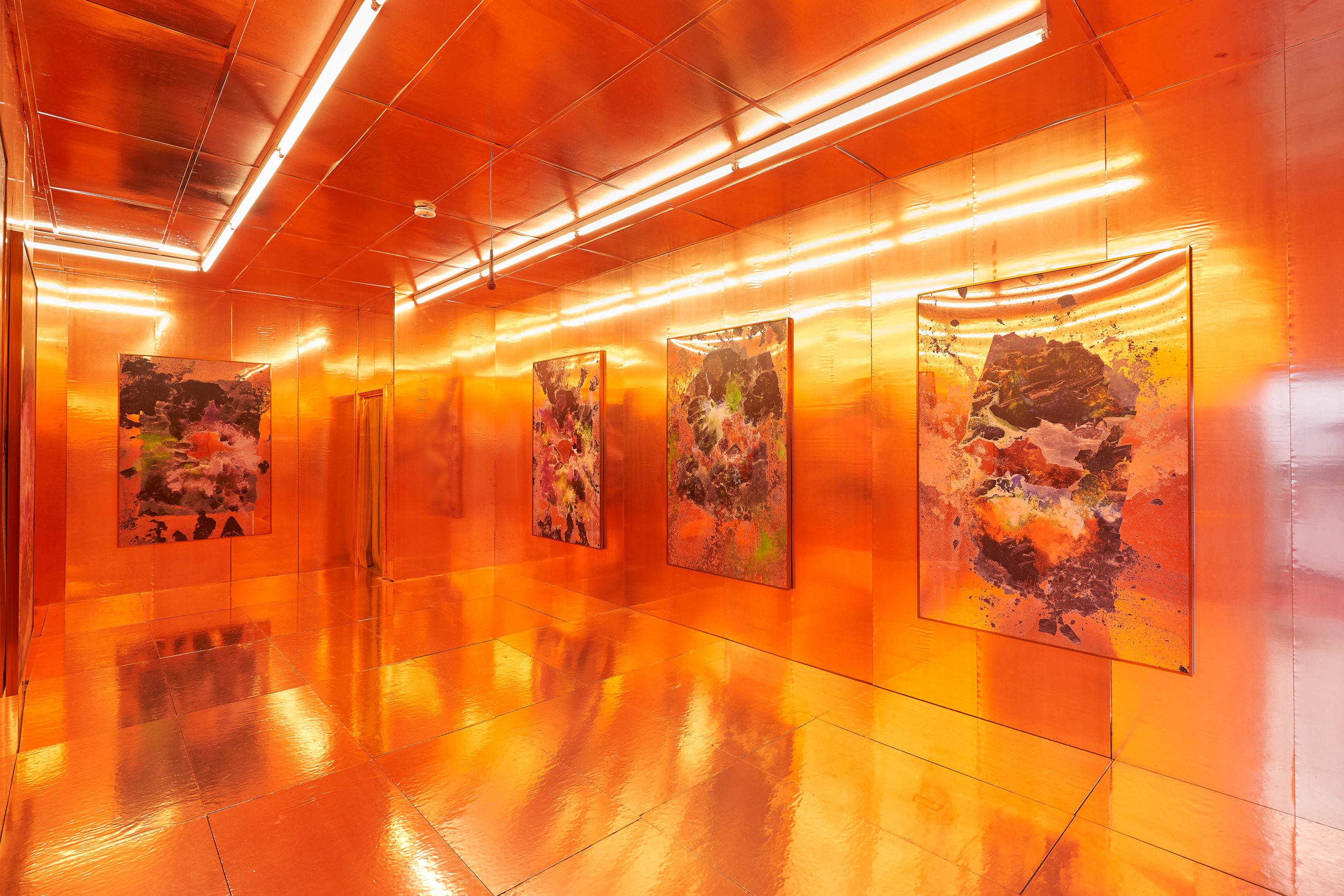 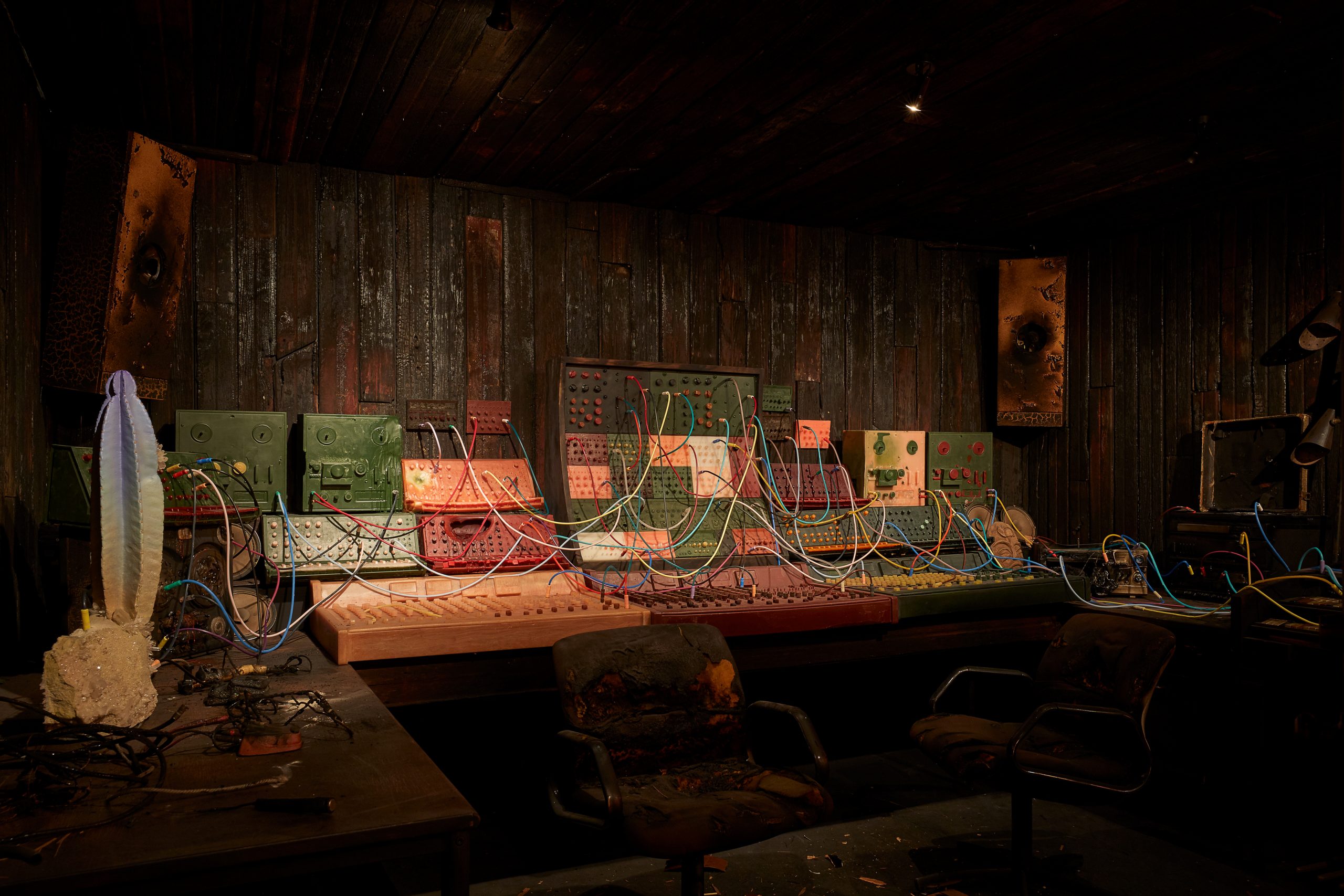 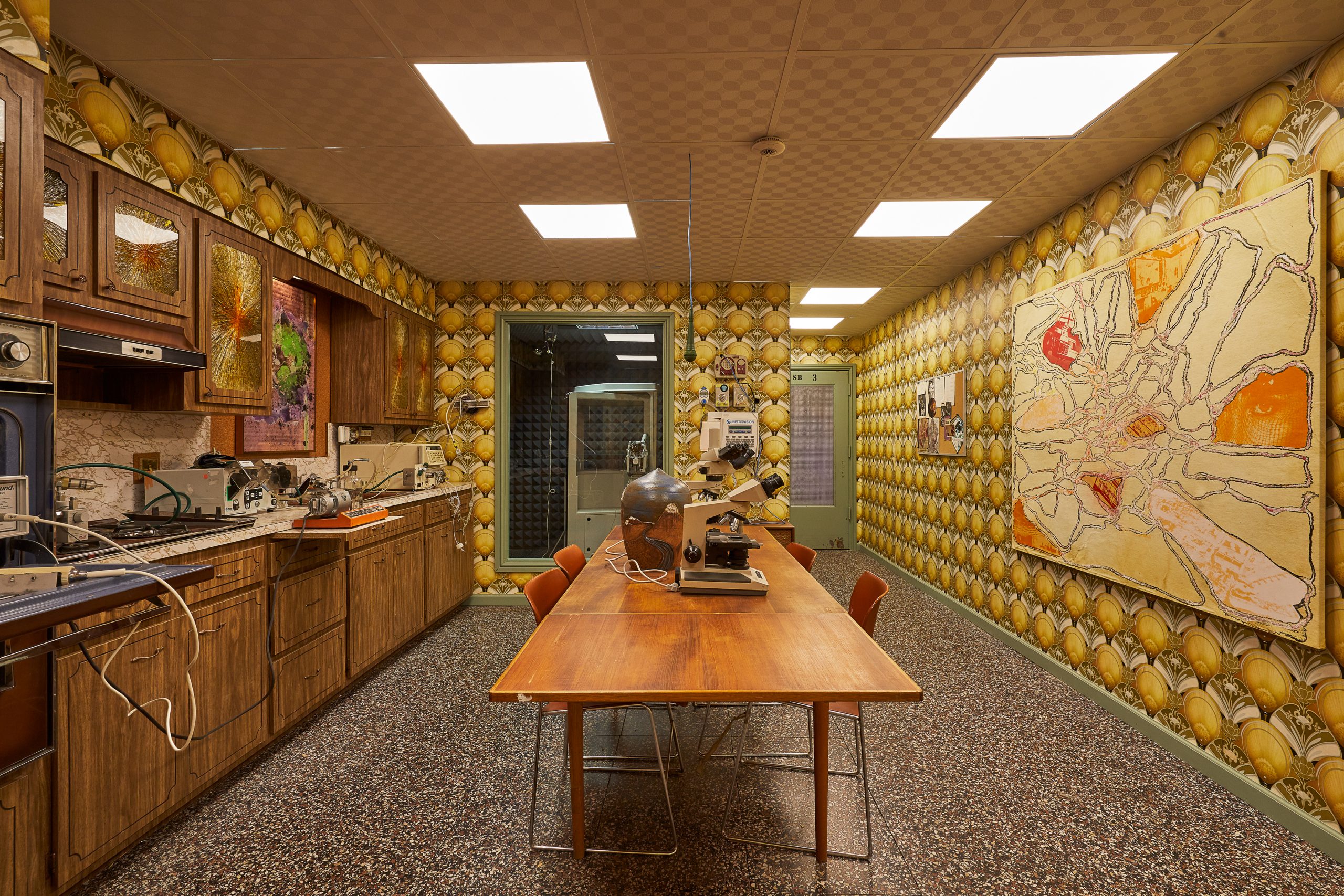 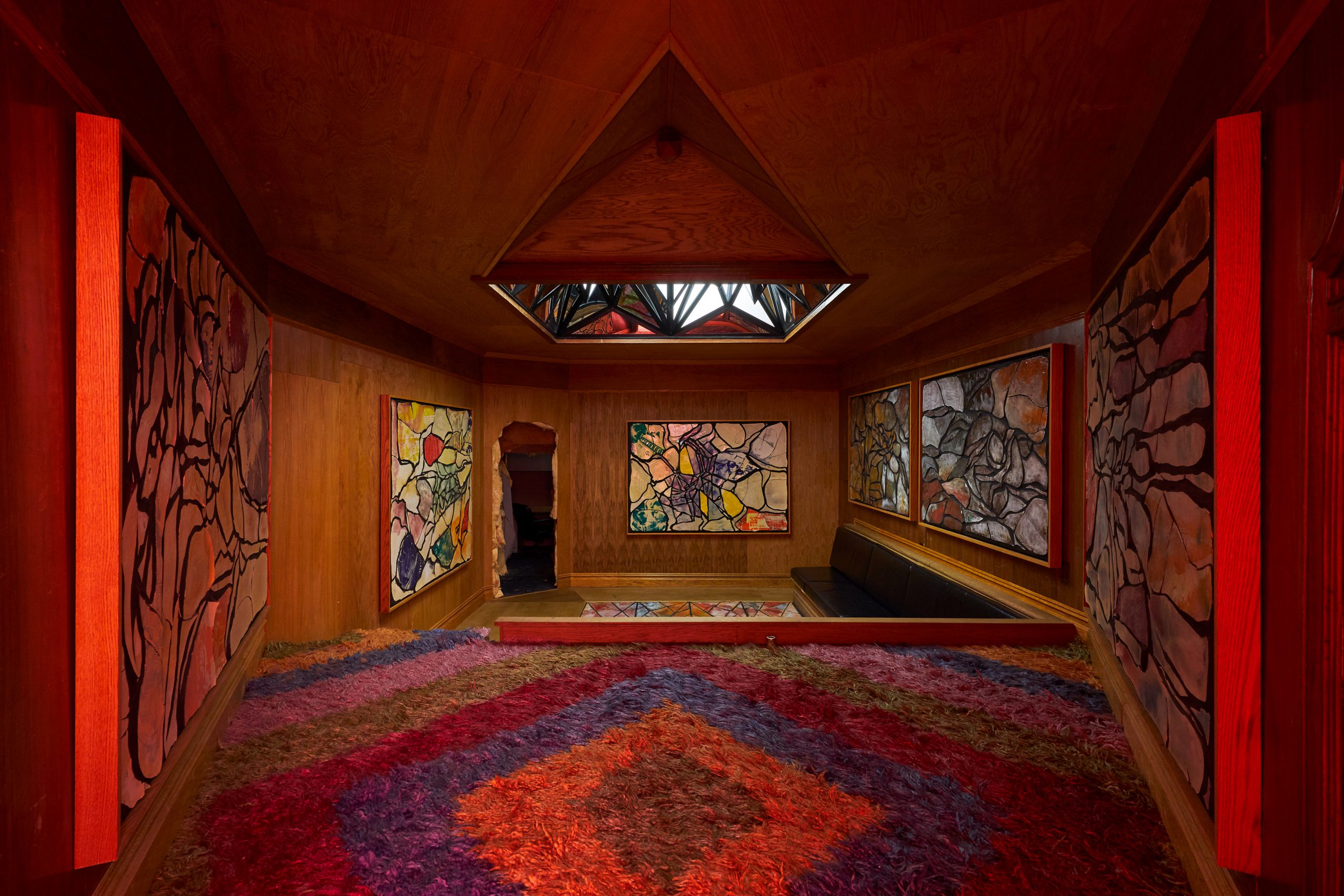 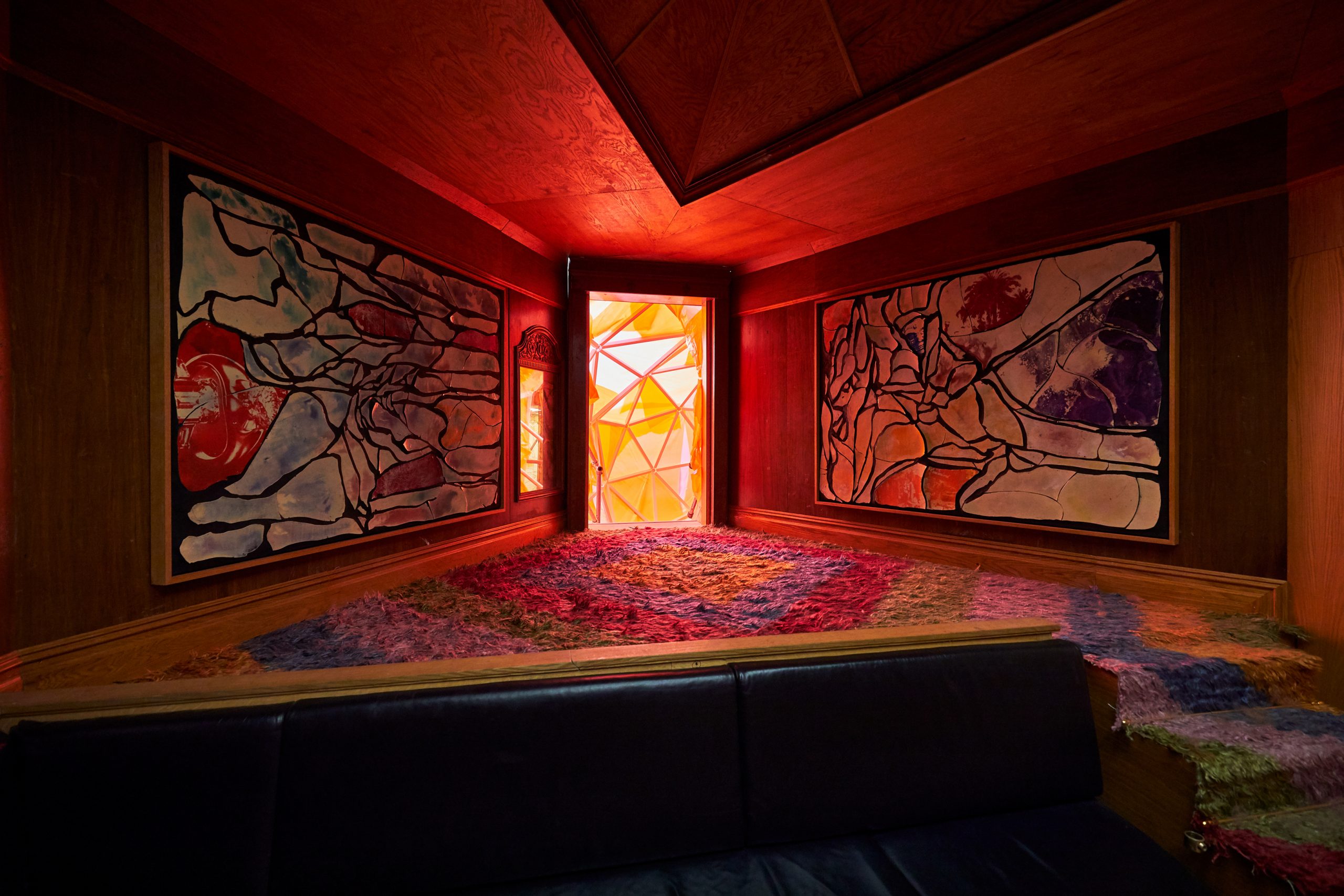 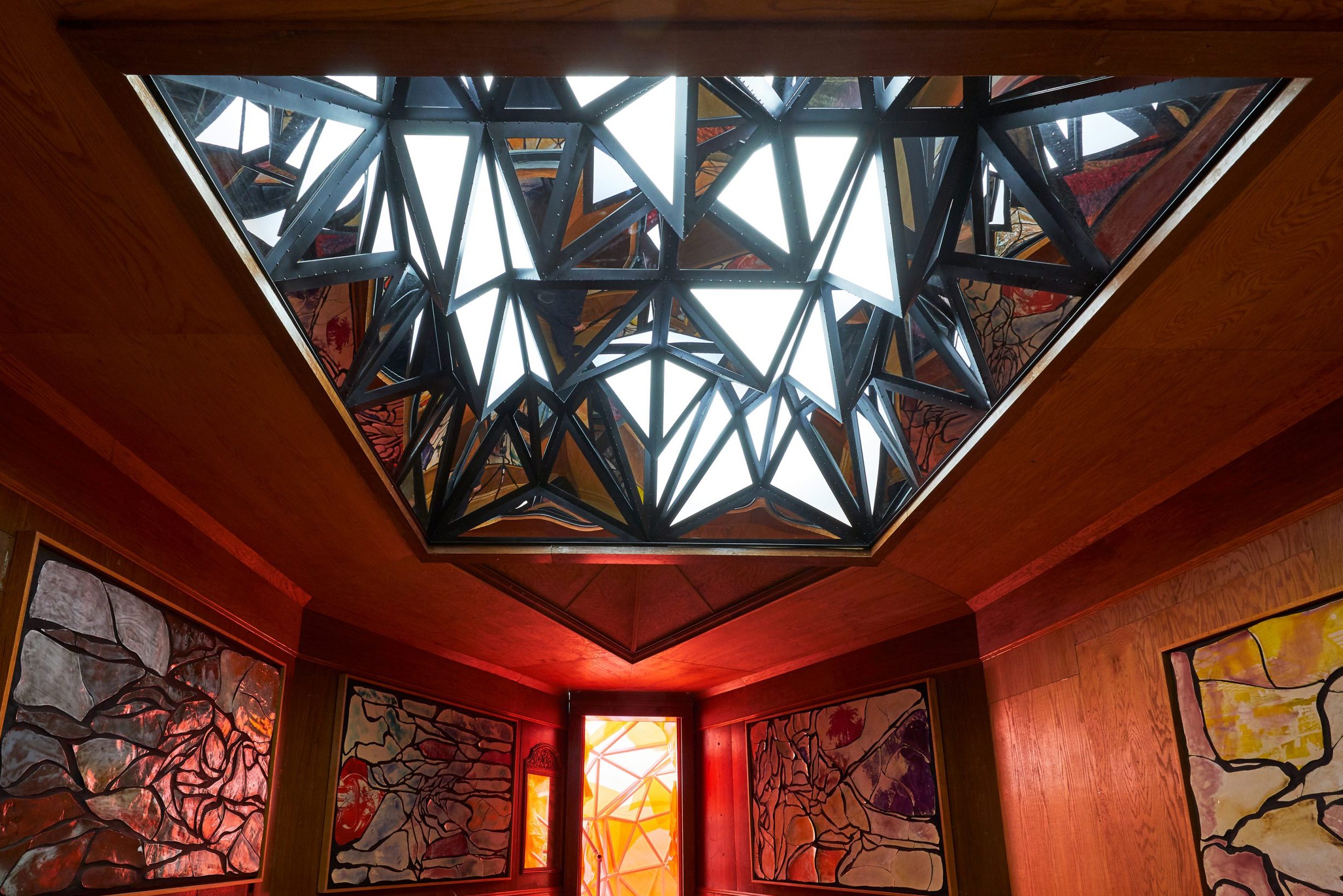 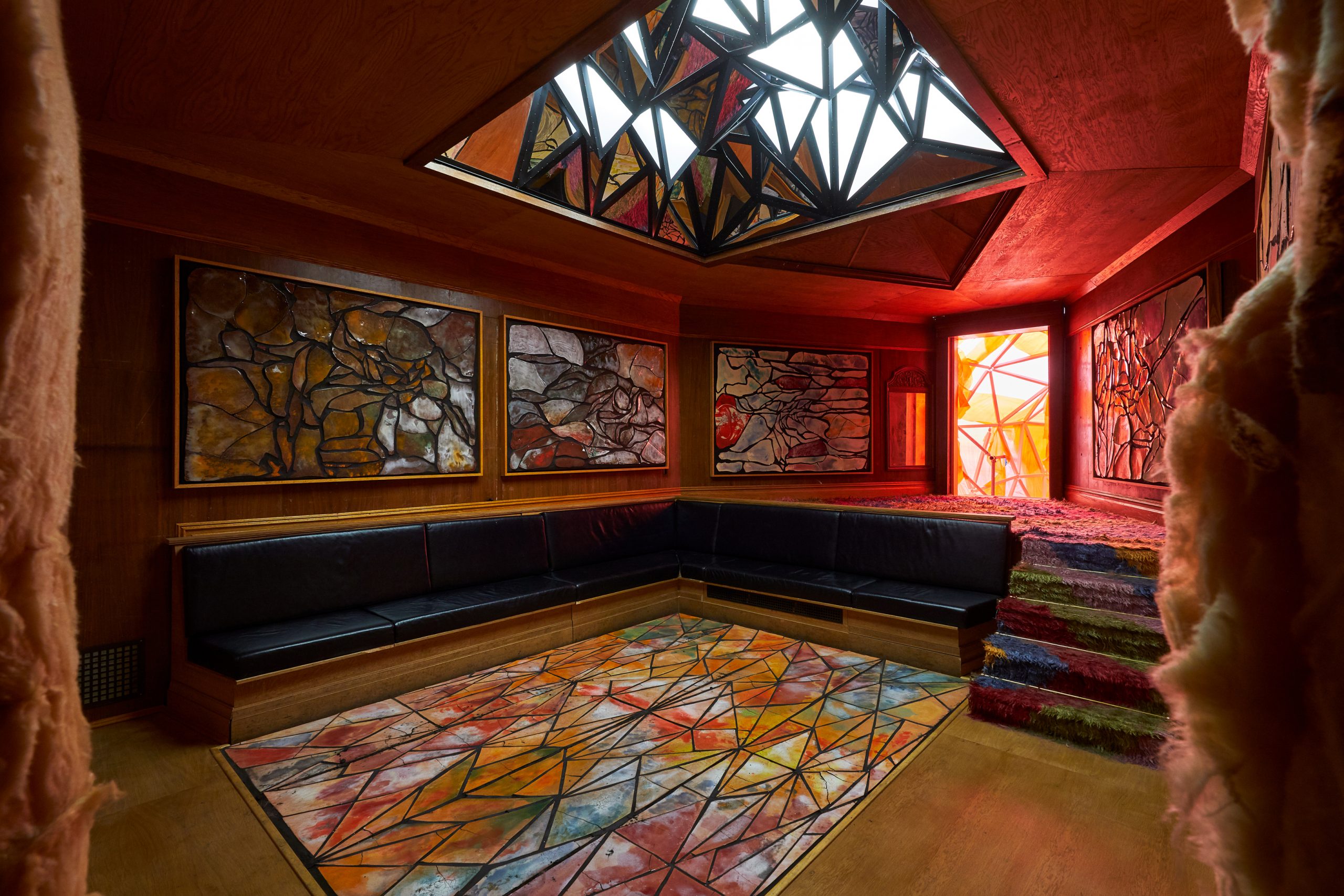 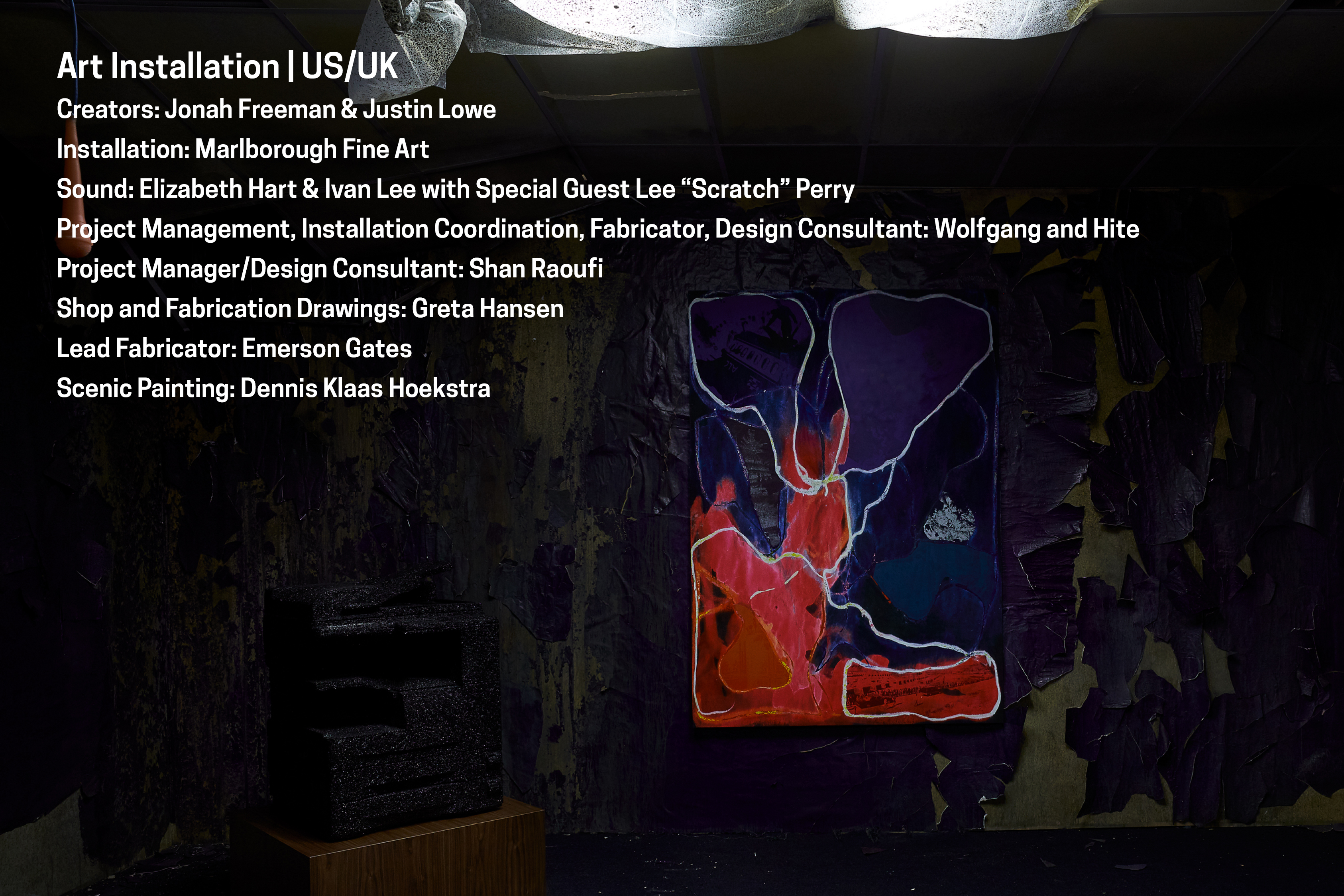 Annie Armstrong: What’s the craziest experience you’ve ever had at an art opening?

Lacey Dorn, artist: Walking into a transformed Marlborough Gallery in London for Jonah Freeman and Justin Lowe’s installation, and not recognizing where I was or what planet I was on.

Colony Sound represents the latest chapter in the artists’ San San Universe. This episode is focused on a set of relationships surrounding the evolution of an obscure 20th-century communication system known colloquially as The Smile. The previous chapter, A Cell in The Smile, which is buried in an underground bunker somewhere in Ohio, begins the story in the technoscape of cold war California. This is the era when paranoid scientific achievements ushered in several new stages of unreality. Aerospace, microchips and the entertainment industry all flourished in the heady days of post-war West Coast. Colony Sound picks up as the hybrid fruits of neo-biological technology are appropriated by emergent sub-cultures in an attempt to remake society.

In this exhibition, Jonah Freeman & Justin Lowe riff on the historical narratives surrounding The Smile to create a sprawling architectural intervention that oscillates between the habitats of the counterculture and the sites of technological invention. A series of eleven rooms range from a telecommunications retail outlet to a half- incinerated recording studio to a copper room used to shield from electromagnetic waves to a shopping-arcade-turned-youth-habitat to a drop-out lounge constructed of homemade ceramics. Within these environments are multiple series of art objects that reposition the matter of The Smile and its cultural byproducts in purely physical and spatial terms. The objects and environments drain the illusory and confront the visitor with the material edge of media technology. 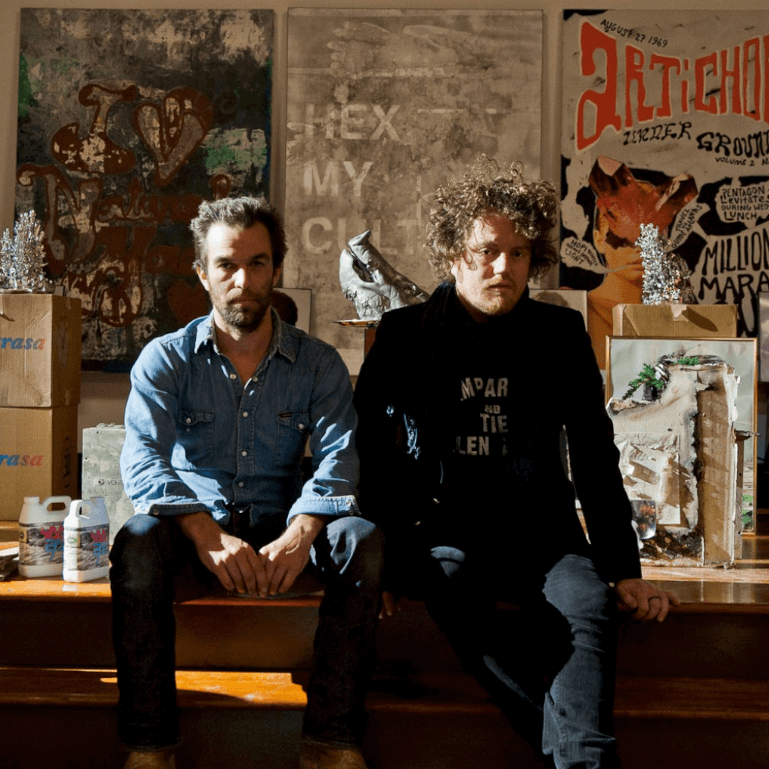 Since 2007, Jonah Freeman (born 1975 in Santa Fe, New Mexico) and Justin Lowe (born 1976 in Dayton, Ohio) have been collaboratively drawing on a series of historical and fictional narratives to create large-scale, maze-like architectural installations. Their explorations of architecture as immersive sculpture are realized by reimagining dystopian visions, psychotic episodes, and the workings of drug-related subcultures. Working in simulation, the two create interiors, almost set pieces, in which attention is paid to each detail; viewers enter and explore environments filled with found objects and imaginary products that create fantastical, fictitious worlds of counterculture. Their joint practice has led to solo exhibitions at Art Basel: Unlimited, Basel, Switzerland; Kunsthal Charlottenborg, Copenhagen; Marlborough Mayfair, London and Marlborough Chelsea, New York; Ballroom Marfa, Marfa, Texas, and the Museum of Contemporary Art, Los Angeles, as well as numerous group exhibitions worldwide.

All of our projects over the past 12 years have been engaged in a faux-anthropological examination of a fictional city-state known as San San. With each project we have taken a sector of this urban condition and rendered it in spatial, sculptural and cinematic forms.

Colony Sound was an attempt to illustrate a set of relationships surrounding the media environment of the San San Universe. In our conception the media, which is colloquially called The Smile, is like an illusory blanket that hovers above the corporeal world. Since the primary mediums of Colony Sound are architecture and objects there seemed to be a particularly unique tension between the tangible, material environment of the work and the ineffable quality of media writ large. This also seemed to be a good vessel to further illustrate a theme that runs through all our projects which is the relationship between oppositional subcultures and industrial society. There are several reasons for taking on this subject now but the obvious one is that over the past couple years we have begun to see the horizon where media begins to merge with our biology in more extreme ways. Colony Sound was an attempt to take on this nascent condition in an absurdist, contradictory form.

We learned a lot about the field of asset liquidation, which is now a booming business as stores close and retail moves online. There are people who travel all over the world liquidating stores, factories and shopping malls. There is strange irony in us scooping up the material being made obsolete by the new world of mediated shopping and then repurposing it into a project that is in some ways trying to illustrate the bizarre tension between the built and illusory worlds.

The most challenging aspect of all our projects is financial. There is invariably never enough money to achieve what is in our minds. A big part of the initial creative process is figuring out how to squeeze our vision out of whatever funds are available. This inevitably means a lot of ideas are left out. What to take out and what is the most essential keep is always the most challenging stage. After that the work generally flows with pleasure and ease.

“Freeman & Lowe riff on the historical narratives surrounding The Smile to create a sprawling architectural intervention that oscillates between the habitats of the counterculture and the sites of technological invention. Their new presentation will mark Freeman and Lowe’s UK debut – a series of eleven rooms ranging from a telecommunications retail outlet to a half-incinerated recording studio; a copper room used to shield occupants from electromagnetic waves and a shopping arcade-turned-youth-hangout constructed of homemade ceramics. Within these environments are multiple series of art objects that reposition the matter of The Smile and its cultural byproducts in purely physical and spatial terms. The objects and environments drain the illusory and confront the visitor with the material edge of media technology.
— Mark Westall, FAD magazine
“Jonah Freeman and Justin Lowe conjured a science fiction fantasy of decrepit staged dioramas stashed with junk. Like an ode to their lust for illicit substances, traces of crystal meth that regularly show up in their previous projects become sublime again. The substance acts as the underlying central theme where ‘rock’ motifs reoccur (i.e. the cactus sculptures growing out of geodes on metal tables in the lab and the arcade room’s case of black market prizes). With eleven rooms that seem to have been abandoned by their junkie inhabitants, the exhibit . . . offers up a speculative take on American history. . . . These carefully constructed environments make the ‘case’ for the primary takeaway of the exhibition: our relationship with technology, albeit a dependent one, goes hand in hand with drug use.”
— Gabrielle Golenda, AN Interior
“Tapping into the sense that the 21st century has come to seem like a stage set – pliable, flimsy, contrived – Freeman and Lowe mix different doses of retrofuturism. It’s as if Alice has fallen through the looking glass and woken up on the Starship Enterprise. . . . Despite its heavyweight brew of political paranoia and technological invention, this show is ultimately an experiment in immersion: as much a head trip as an art exhibition; a thrilling, hyperbolic pastiche of reality, almost, but not quite, as we know it.”
— Daniel Culpan, Frieze