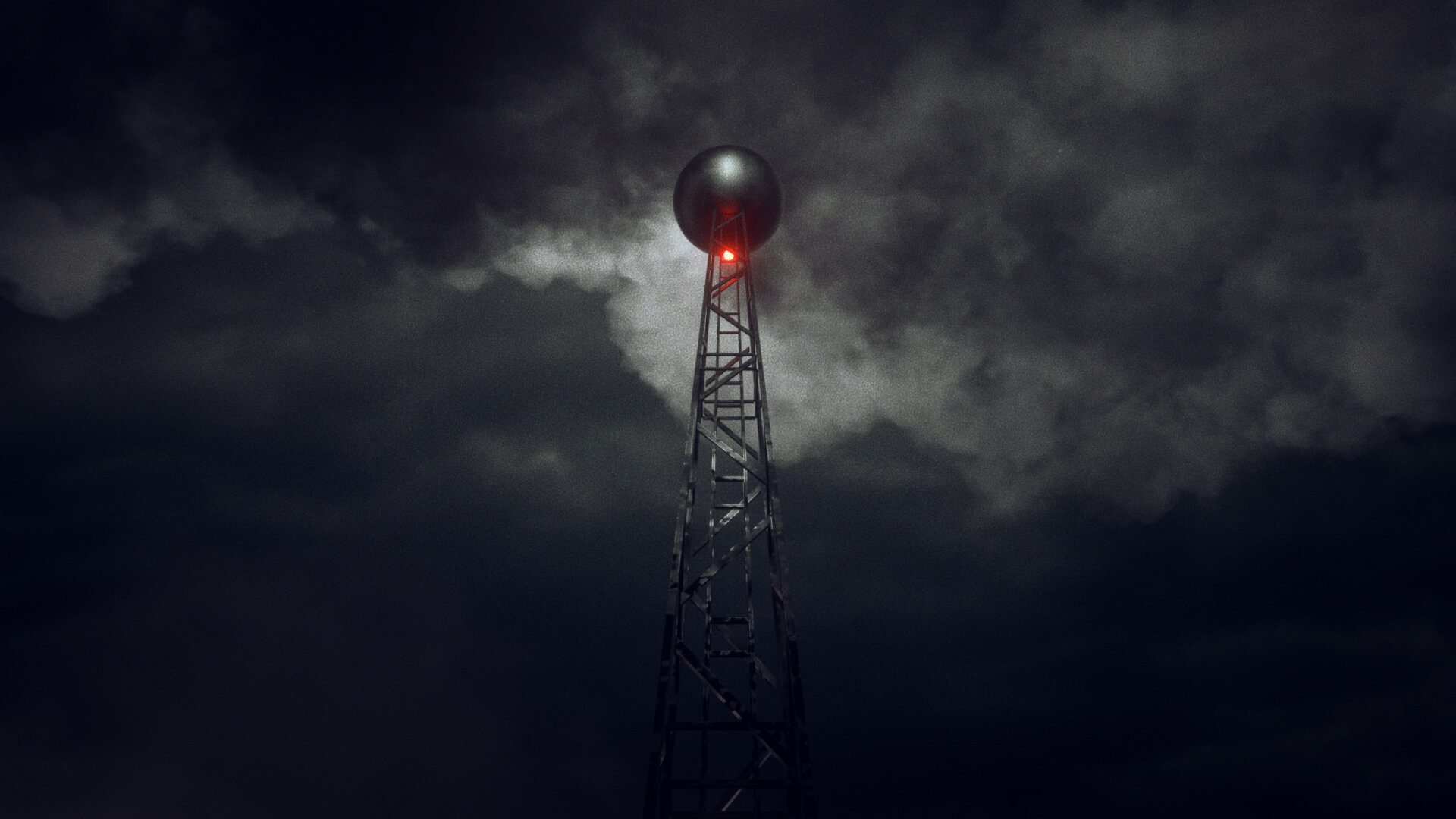 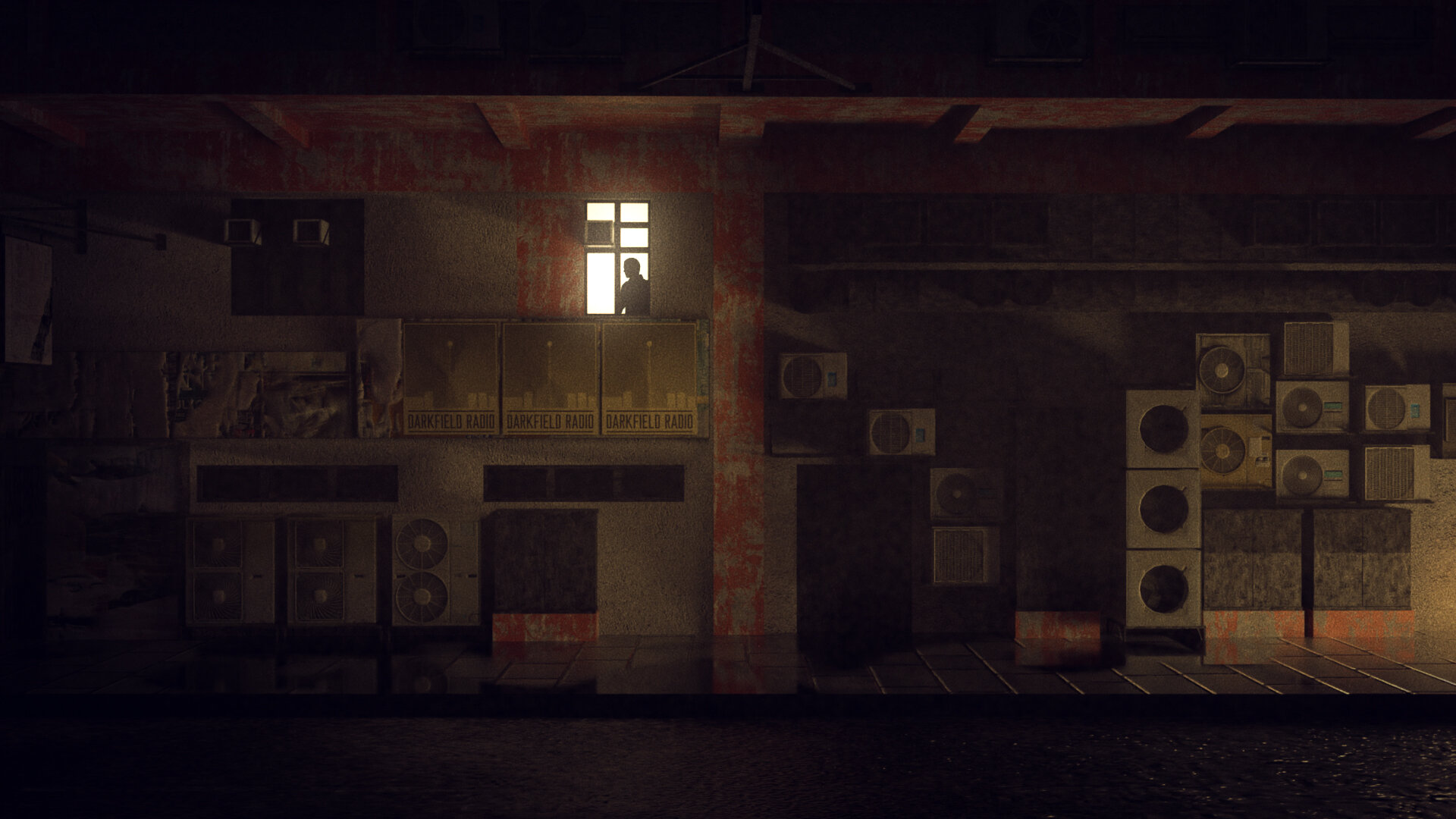 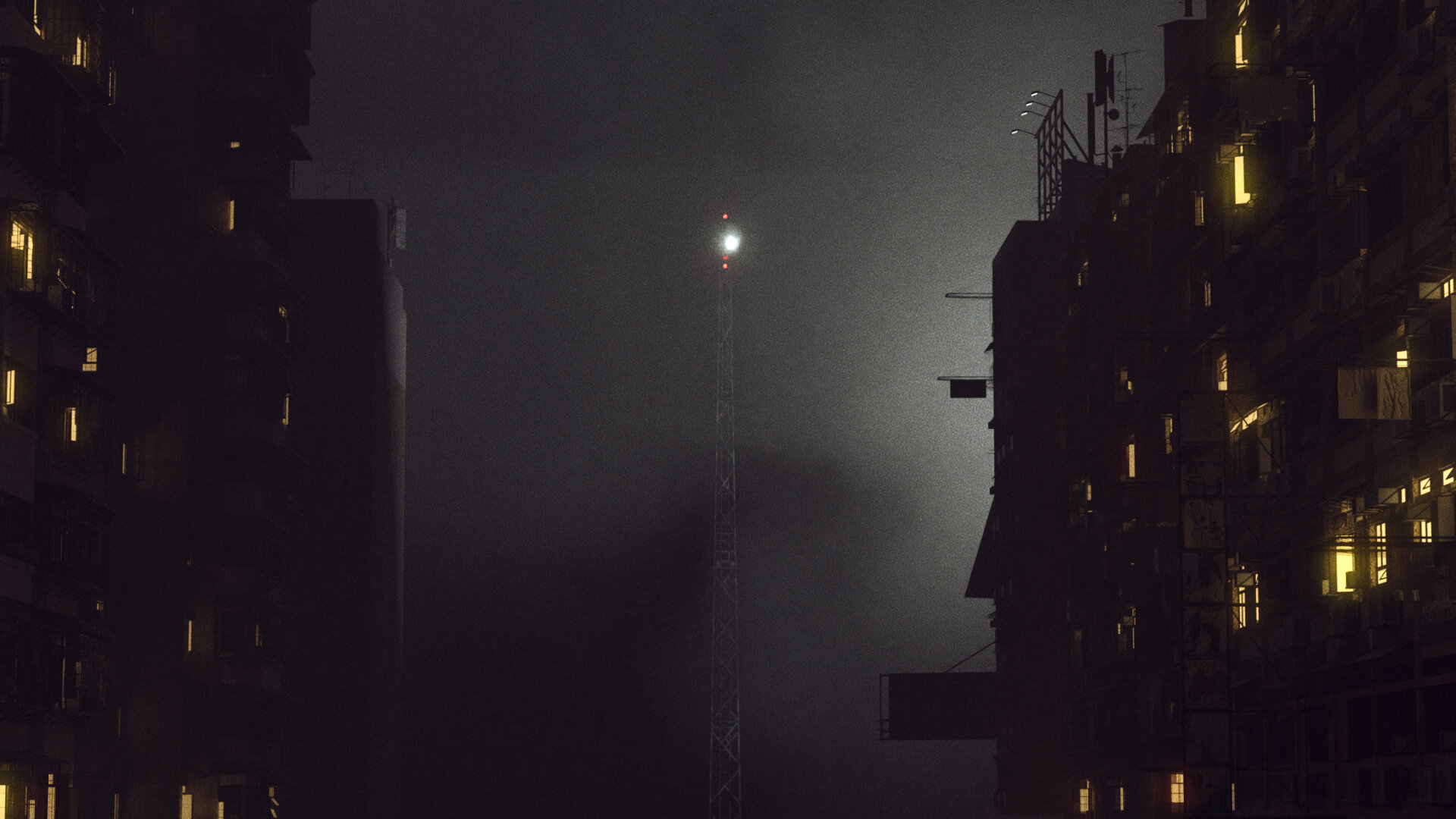 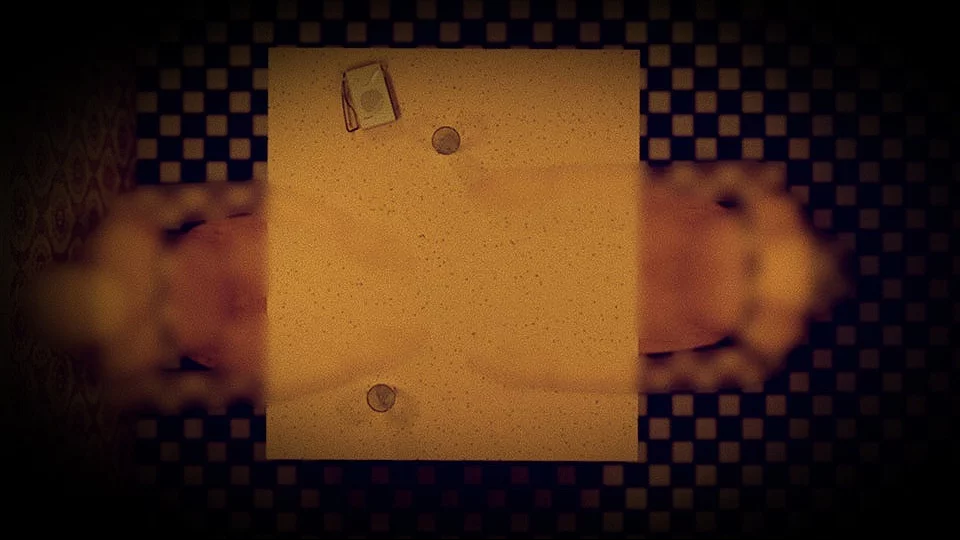 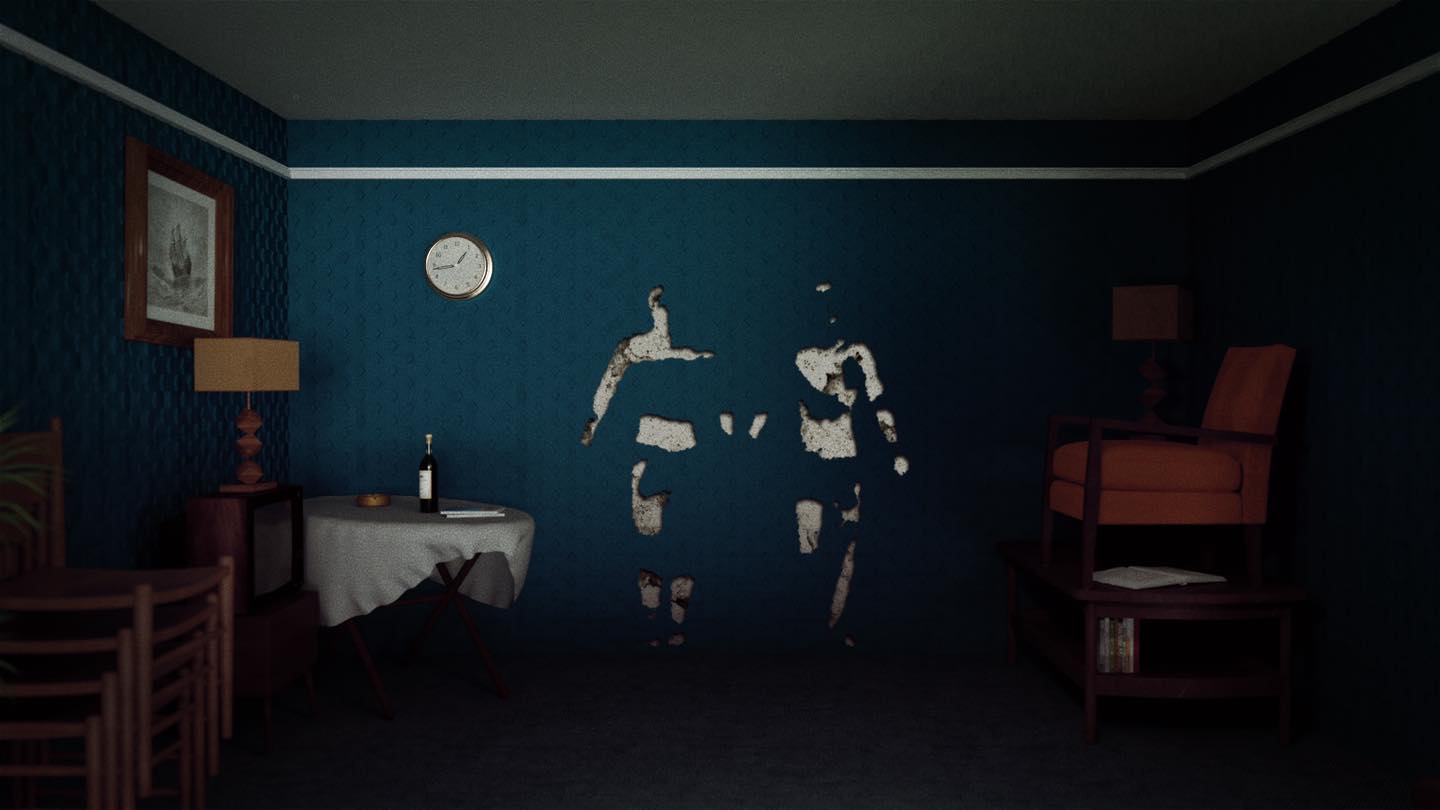 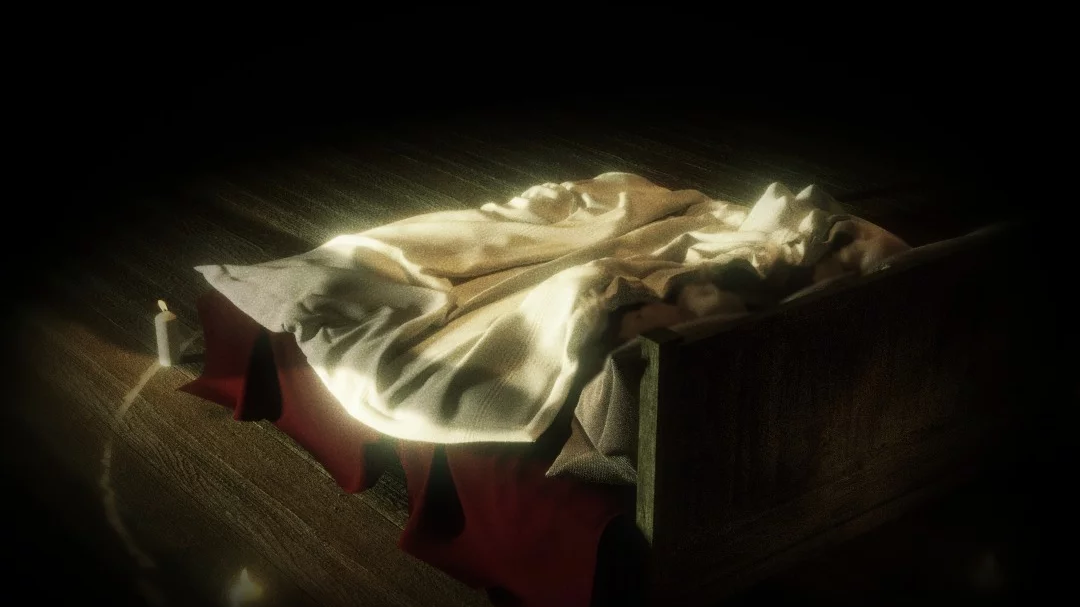 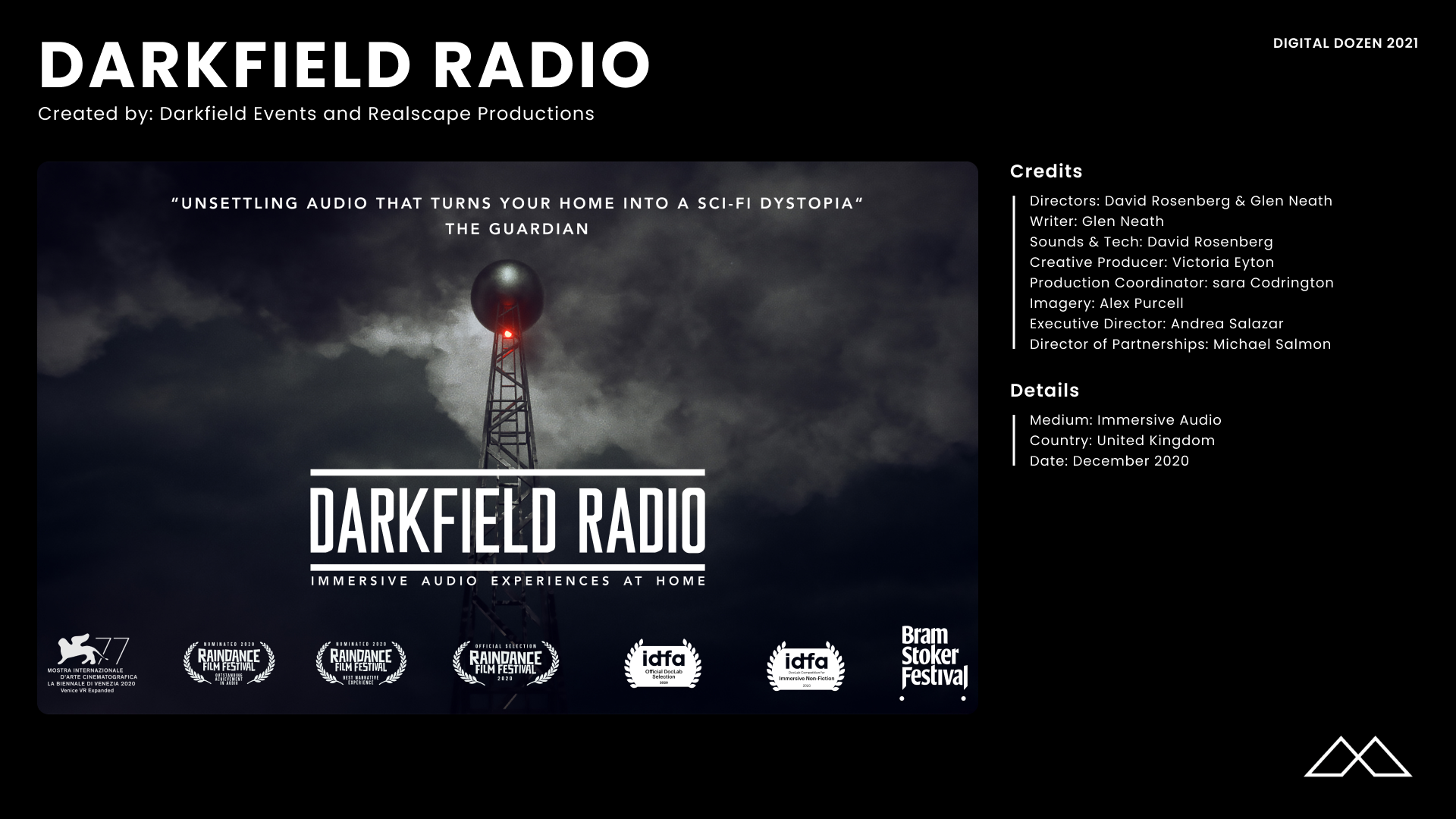 Darkfield Radio is an innovative form of entertainment that immerses audiences in strange and curious worlds in their own home, bringing new meaning to the familiar spaces we inhabit. Taking part is simple: buy a ticket, download the Darkfield Radio app, and enter your code. At the designated hour, you put on your headphones and your home becomes the setting for another world, blurring the lines between what is real and what is imagined.
Throughout Darkfield Radio’s first season in 2020, three shows were released: Double, Visitors, and Eternal. Double, picked for the Best of VR selection at the 77th Venice International Film Festival, was for two audience members sitting at their kitchen table. Visitors, selected for Raindance Immersive and the Amsterdam International Documentary Film Festival, was for two audience members sitting opposite one another in their living room. Eternal, commissioned by the Bram Stoker Festival Dublin, was for a single audience member lying alone in bed. Season 2 of Darkfield Radio, bringing new shows to the platform, will be released in 2021. 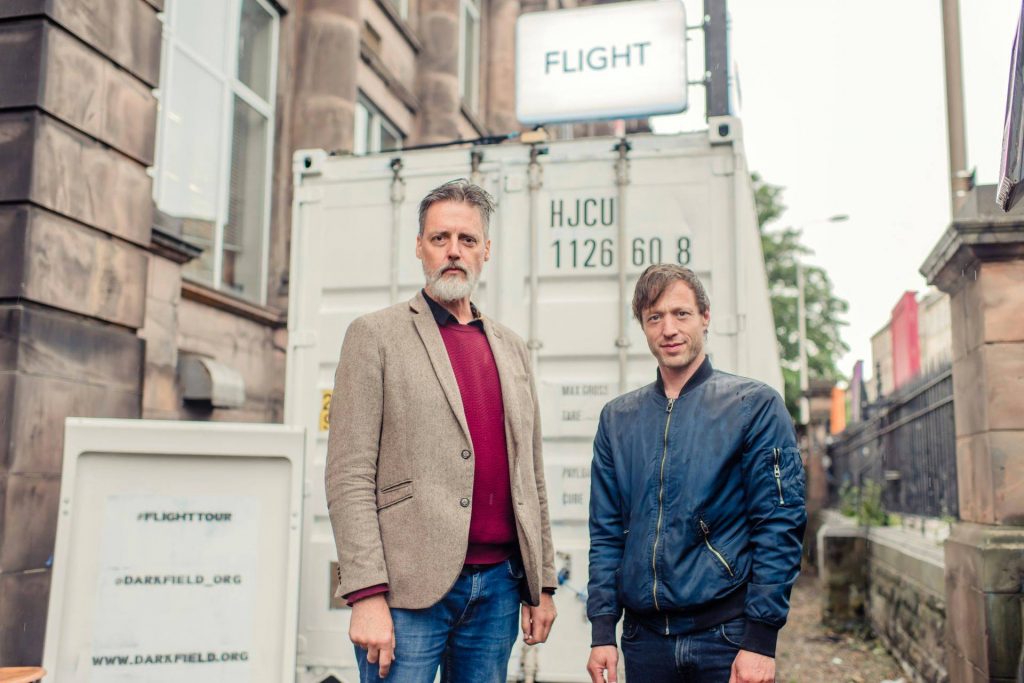 Darkfield, led by David Rosenberg and Glen Neath, is known for presenting intense and deeply immersive experiences in pitch darkness inside shipping containers—works that have been described as “a multi-sensory sonic theme park.” As 2020 began they were presenting three of them: Séance, Flight and Coma. The three shows were scheduled to run daily from February 28 to March 22 when the coronavirus hit. They responded with Darkfield Radio.

David Rosenberg co-founded Shunt to pursue an interest in the role of an audience in theatrical productions and directed all their shows: The Ballad of Bobby Francois, Tennis Show, Dance Bear Dance, Tropicana, Amato Saltone, Money, The Architects and The Boy Who Climbed Out Of His Face. Working with Frauke Requardt, he conceived and co-directed The Roof, Electric Hotel and Motor Show, for which he used binaural sound recordings to allow the audience intimate access to distant spaces. David co-directed DeadClub, presented at The Place, and he is one of the team behind Wiretapper, an audio project hiding performance in public spaces.

Glen Neath has written novels, plays for radio, for the stage and non-theatre locations, performed by rehearsed and unrehearsed actors and by members of the public who are also the audience. Projects include Wedding, Free Show (bring money) and Die or Run with Hannah Ringham, Hide with Lizzie Clachan, Unpack with Neil Bennun and Hello for Dummies and Romcom with Ant Hampton. His radio plays for BBC Radio 4 include Listen Up, Six Impossible Things, Occupied, The Long Count and a two-part adaptation of The Arabian Nights. His debut novel, The Outgoing Man, launched Portobello Books in 2005 and was shortlisted for the Authors’ Club Best First Novel Award.

TWO QUESTIONS FOR THE CREATORS

We have always thought that we need total control over the environment to make the work effectively, but in the radio shows we use rooms in the audience members homes as the ‘sets’. We have been surprised at how effective the shows have been despite us not being able to turn out the lights. (All our previous work took place in complete darkness.) The audience have happily taken responsibility both for closing their eyes and accepted blame if they open them.

All our work places each audience member at the centre of the narrative and while this makes the shows feel very particular to everybody, it does throw up other challenges around how much of a ‘story’ we can tell. Having said that, creating literal, linear narratives has never been something we have been interested in.

“David Rosenberg and Glen Neath have produced a masterpiece in which you can never be entirely sure that what you hear is not real; it’s pure horror gold.”
— Michael Higgs, The Upcoming
“Most online theatre struggles to get beyond the screen, to be present in the way live performance is present. By turning your house into a stage, this one, fleetingly, becomes a doppelganger for the real thing.”
— Mark Fisher, The Guardian