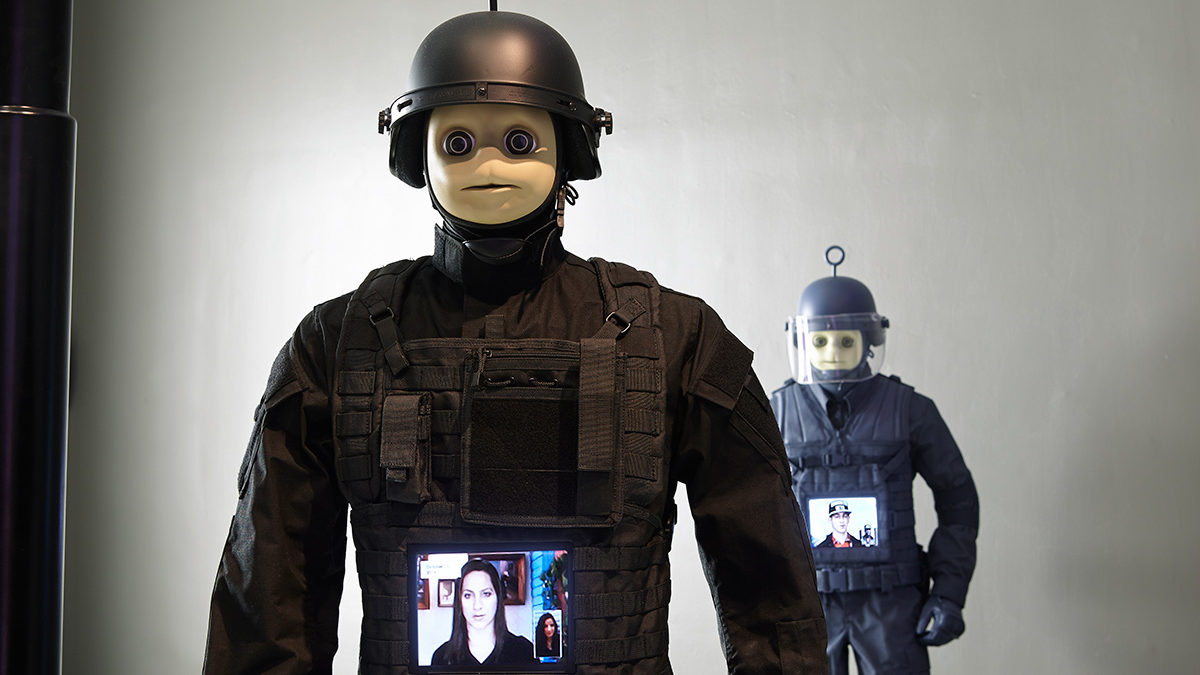 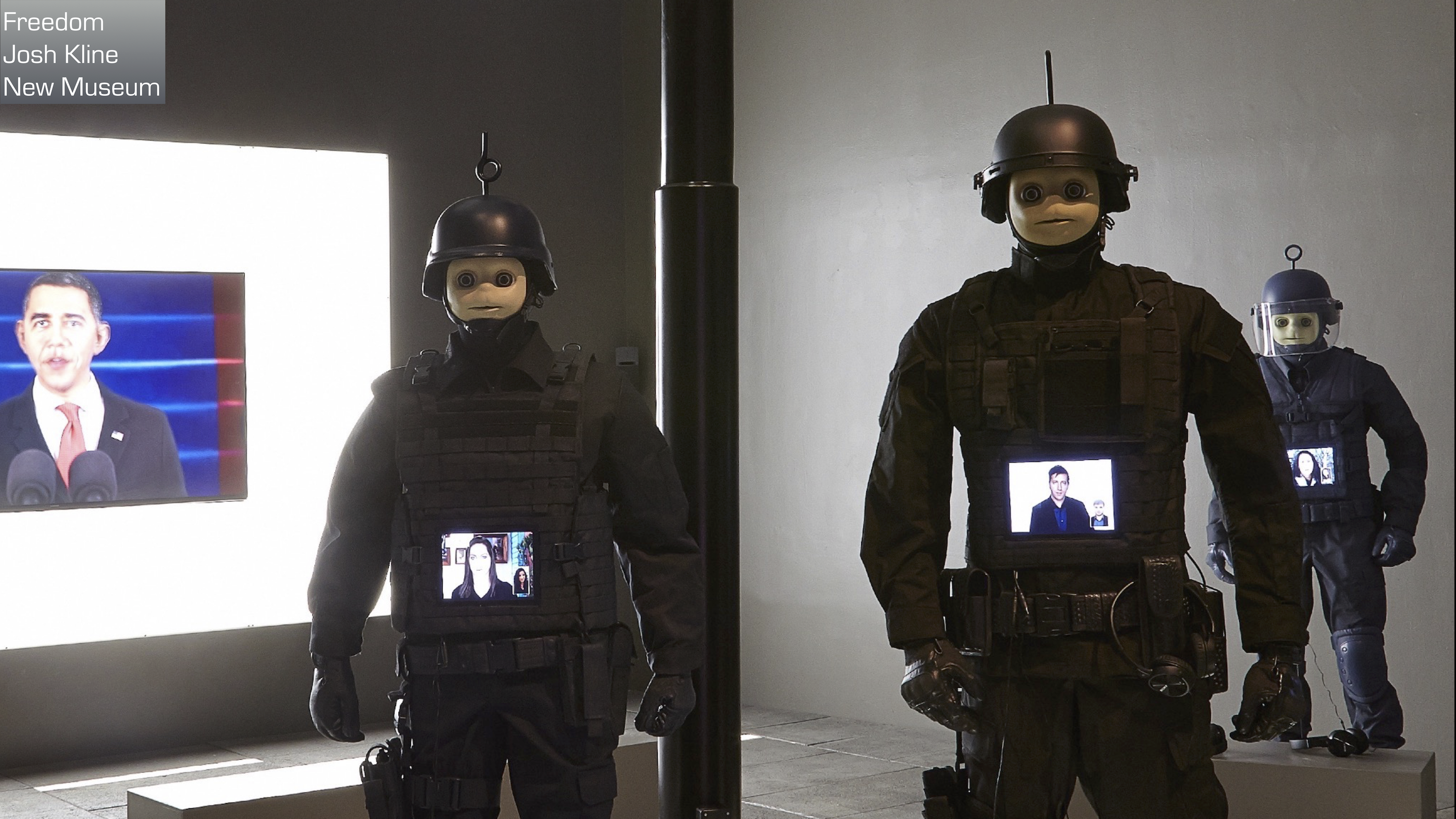 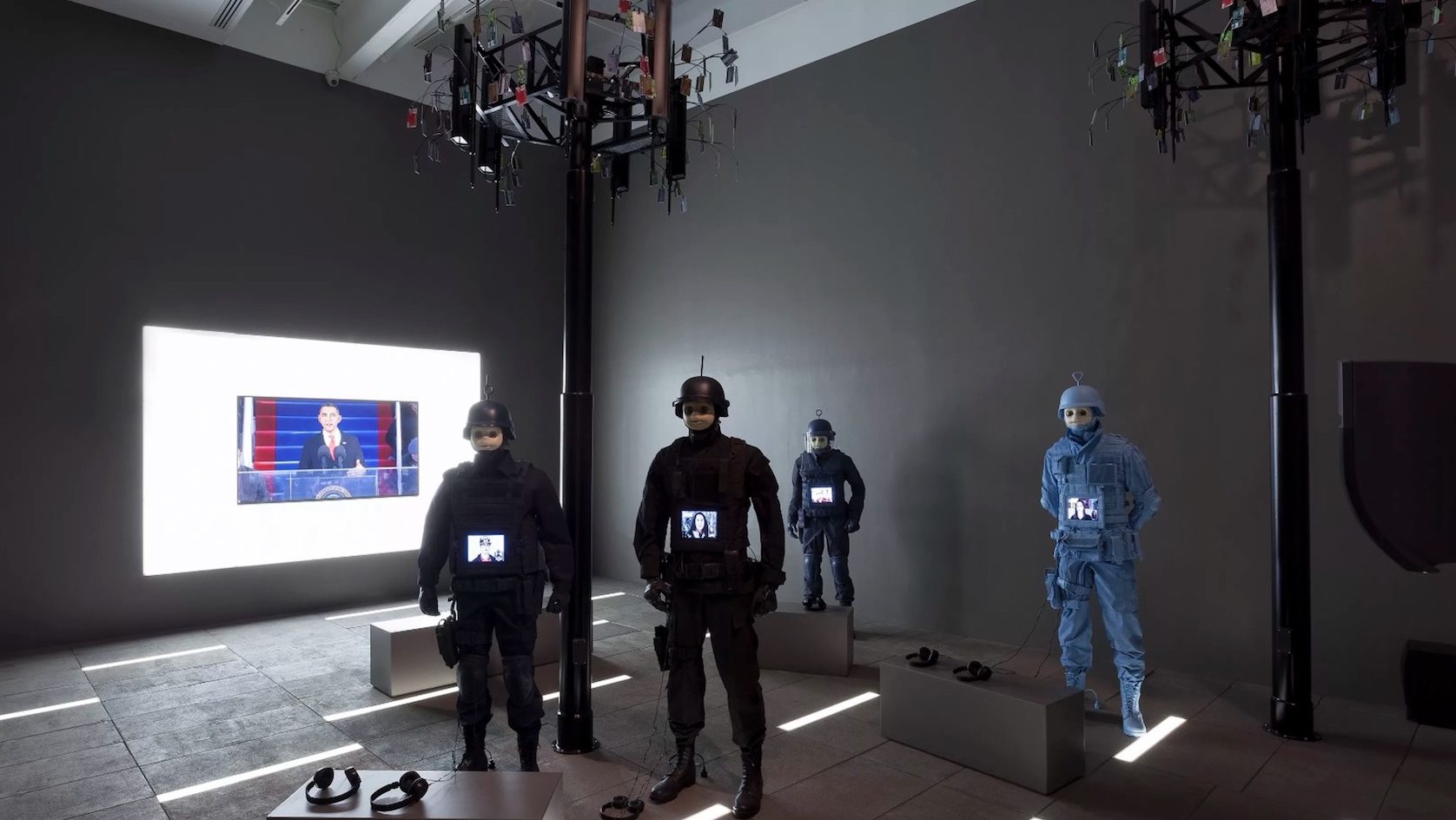 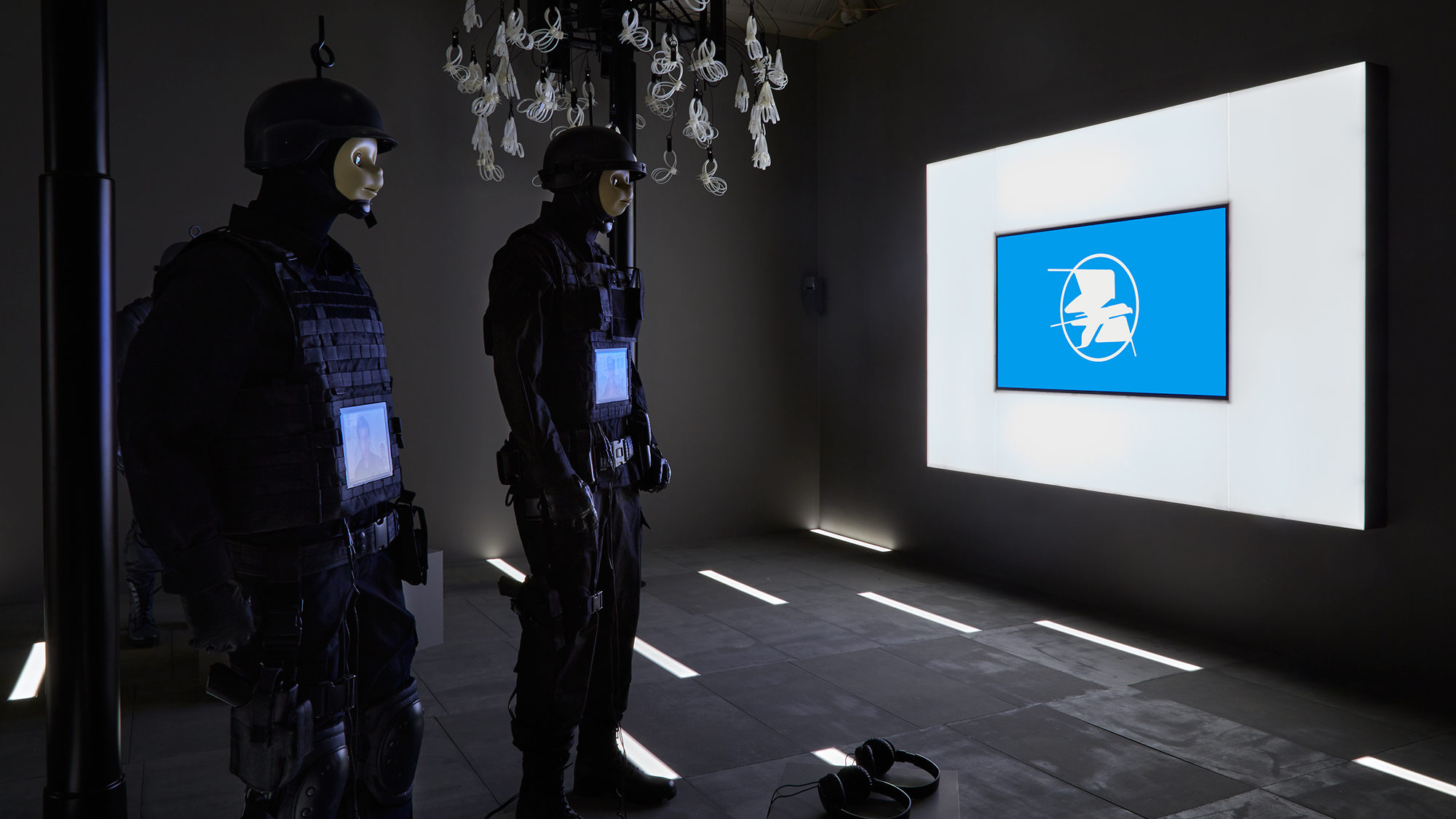 “For the Triennial, Kline has created a new installation titled Freedom (2015), an immersive environment incorporating sculpture, video, and architectural elements, based around the concepts of ‘the voluntary and involuntary dissolution of privacy, digitized identity, and the political consequences of this way of living.’ Modeled after the corporate architecture of privately owned public spaces like Zuccotti Park, the installation incorporates LED lights, antennae disguised as trees, concrete police barricades, and stealth paint, within which Kline has situated life-sized ‘Police Teletubby’ sculptures. The sculptures reimagine the popular children’s television characters — aliens with antennae protruding from their heads and television screens in their bellies who live in a world populated by anthropomorphized consumer devices — as members of an alternative NYPD SWAT team, its uniform rebranded by Google. The embedded video screens play scripted social-media hijacking videos produced by Kline, with off-duty police officers as actors, portraying characters based on ‘found’ social-media feeds, their faces masked and transformed via face-substitution software. Referencing police violence, big data, corporatized public space, social media, and the language of Silicon Valley tech conglomerates, the installation emphasizes the intermingling of government and corporate interests and the links between ‘sharing’ online and surveillance, all of which chip away at the distinction between the public and private spheres, while creating a new model of twenty-first-century citizenship and selfhood.” 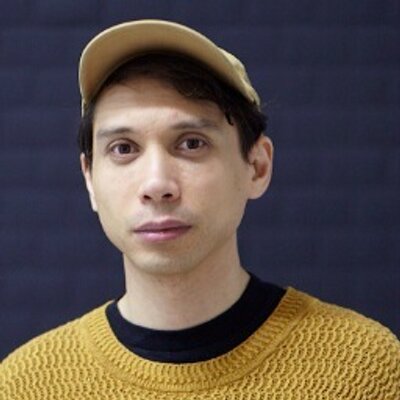 An artist who lives and works in New York, Josh Kline is concerned with, as he puts it, “technology changing what it means to be human.” He does not seem sanguine about the prospect. Freedom, a room-sized installation commissioned by New York’s New Museum for Surround Audience, its 2015 triennial, is dominated by four life-sized mannequins of cops in SWAT gear — cops with Teletubby faces and digital screens embedded in their midsections. These “tummy TVs,” inspired by the BBC’s whimsical late-’90s children’s TV series, play a video Kline calls “Privacy,” in which off-duty and retired police officers, their features disguised by face-substitution software, read social-media feeds that deal with police violence.

Playing on a screen behind them is another Kline video, “Hope and Change,” in which an actor disguised by the same software to look like President Obama delivers an imagined inaugural address — one that recalls the stirring oratory of his 2008 campaign rather than the tepid monologue he actually delivered on being sworn in. “I wanted to imagine Obama as the transformational political figure that America’s youth voted for in 2008 — an FDR or Martin Luther King Jr. for the twenty-first century,” Kline said in an interview that appeared in the triennial catalogue. The Teletubby riot squad, he added, shows people’s “lives, feelings, and beliefs being digested in the belly of the information police.”

Josh Kline was born in Philadelphia in 1979. He now lives and works in New York as an artist and curator. Freedom received widespread critical acclaim when it was first shown at the New Museum Triennial and was subsequently exhibited in solo shows at Modern Art Oxford in the UK and the Portland Art Museum in Oregon. His work was first shown in 2010 and is now in the permanent collections of three major New York museums — the Museum of Modern Art, the Solomon R. Guggenheim Museum, and the Whitney Museum of American Art.

“Klein not only suggests that political and economic change are no more than fantasies, he does so in the language of Teletubby infantalising infotainment and technocracy. ‘Obama campaigned as a transformational candidate and once he got into office, here was this very pragmatic, efficient technocrat. This is definitely about trying to actualise the presidency that people voted for,’ says Kline.

“It is also about distilling possibilities of hope and change in an ever more wired, information-loaded society that blurs reality and unreality, and about considering how the new flood of post-Internet art can respond.”

— Financial Times
“The runaway hit of the show — and the one piece that truly surrounds you — is Josh Kline’s galvanic ‘Freedom.’ A SWAT team of Teletubbies stand guard in a Zuccotti-like plaza; embedded in their stomachs are video feeds of retired police officers reading scripts culled from social media. On a billboard-size screen, President Obama (a professional actor with a video-mapped face) delivers a rousing speech, reimagining the 2009 inaugural address as a rallying cry against corporate greed, racism, Second Amendment abuses, a cynical media, and a government that fails the citizens it was elected to serve. ‘Let this be remembered as a day of action,’ the President says, his face slipping slightly, in Kline’s populist elegy to lost hope and broken promises.”
— The New Yorker