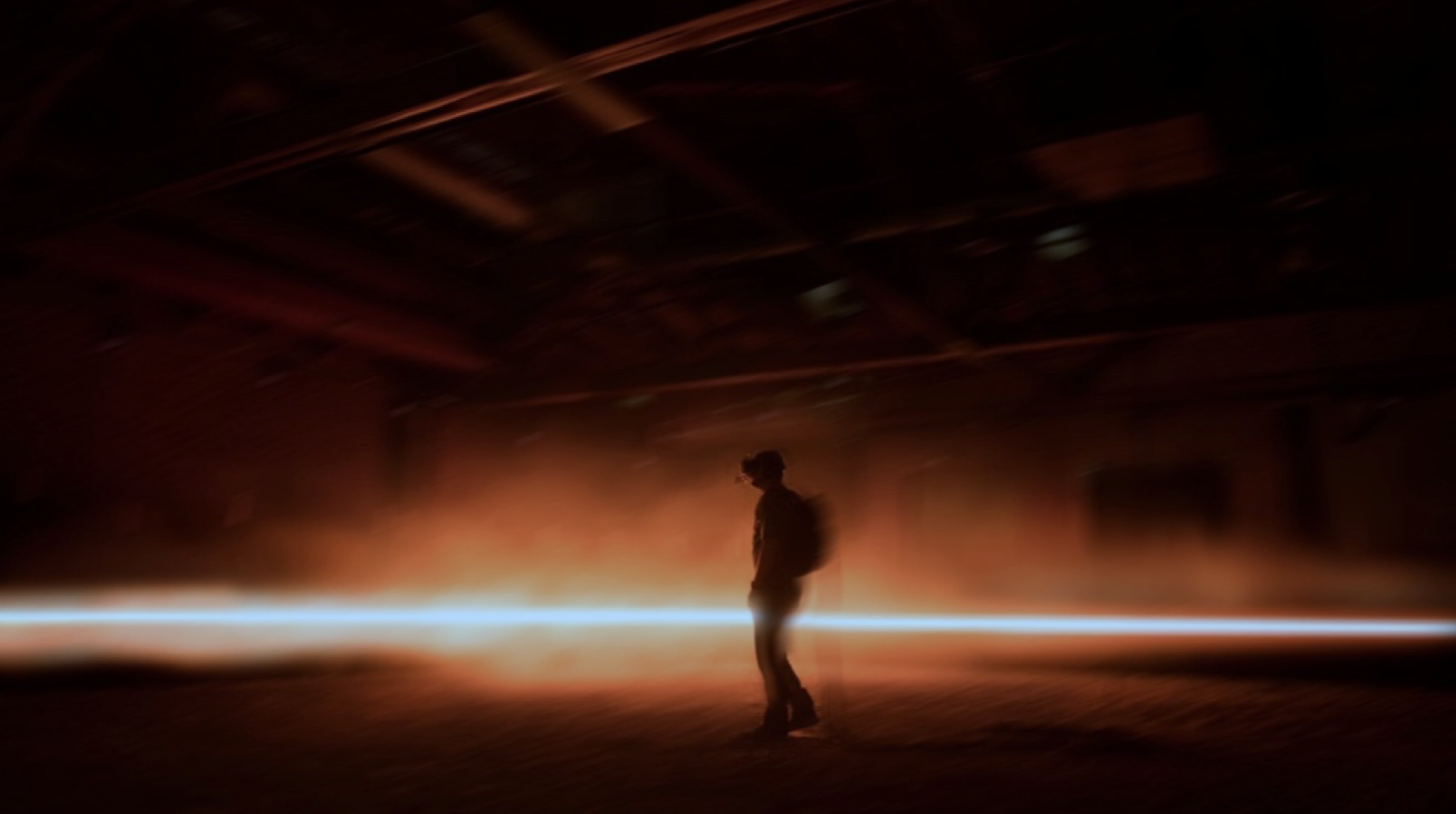 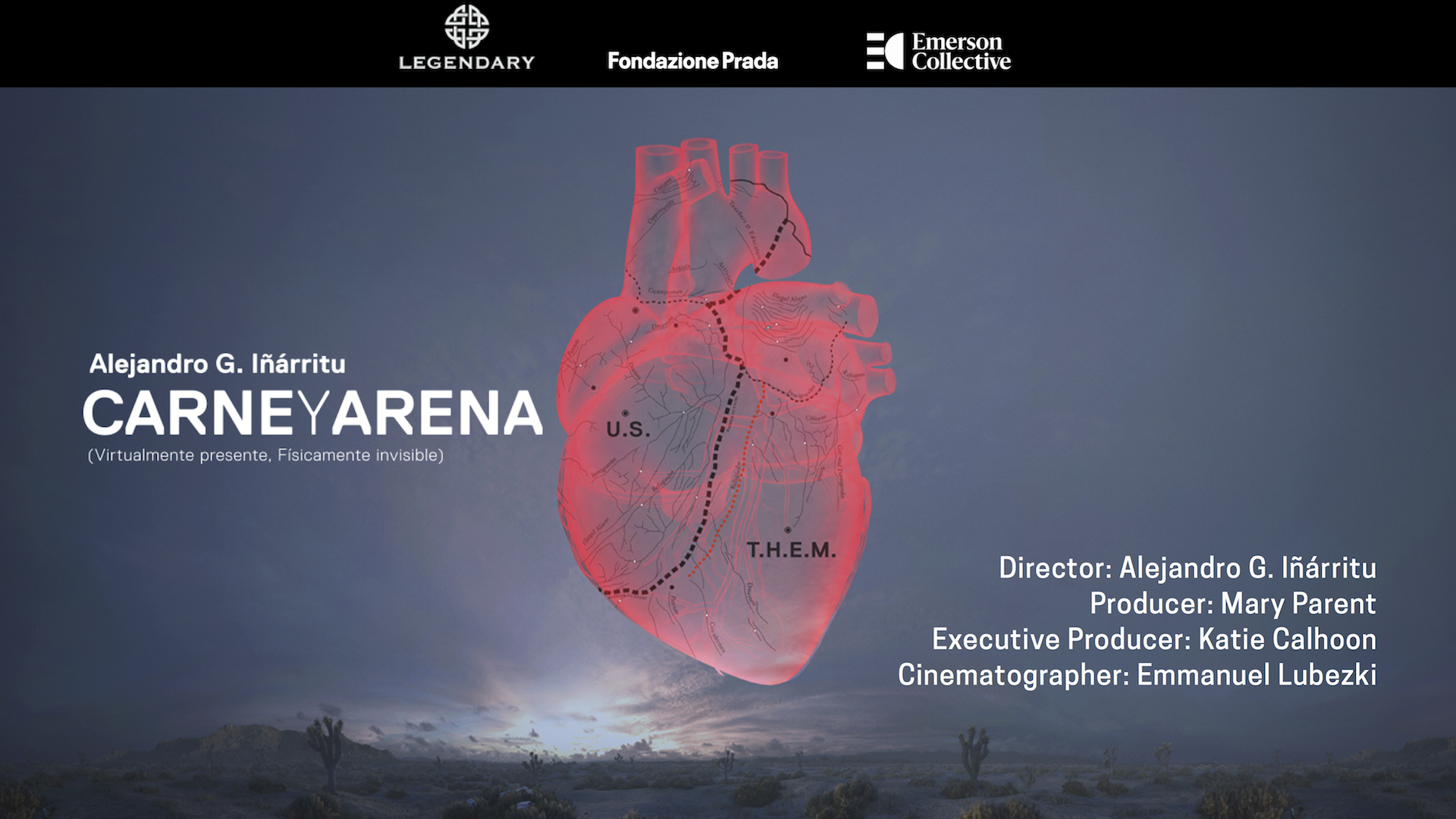 “During the past four years in which this project has been growing in my mind, I had the privilege of meeting and interviewing many Mexican and Central American refugees. Their life stories haunted me, so I invited some of them to collaborate with me in the project. My intention was to experiment with VR technology to explore the human condition in an attempt to break the dictatorship of the frame, within which things are just observed, and claim the space to allow the visitor to go through a direct experience walking in the immigrants’ feet, under their skin, and into their hearts.” —Alejandro G. Iñárritu

Based on true accounts, “CARNE y ARENA (Virtually present, Physically invisible)” employs state-of-the-art technology to create a multi-narrative experience in which the line between subject and bystander is blurred. An immersive installation centered around a six-and-a-half-minute virtual reality sequence for a single person, it allows individuals to walk through a vast space and live a fragment of the personal journeys that immigrants experience on the border between the U.S. and Mexico.

Having premiered in May 2017 at the 70th Cannes Film Festival as its first virtual reality official selection, “CARNE y ARENA” was subsequently installed at Fondazione Prada in Milan (June 2017–January 2018) and at the Los Angeles County Museum of Art (July 2017-July 2018) — the first museum in the United States to exhibit it. In November 2017, Iñárritu received an Academy Award for Special Achievement “in recognition of a visionary and powerful experience in storytelling” — the first such honor to be bestowed since Pixar’s Toy Story in 1995. Iñárritu and cinematographer Emmanuel Lubezki have “opened for us new doors of cinematic perception,” declared John Bailey, president of the Academy of Motion Picture Arts and Sciences. “Iñárritu’s multimedia art and cinema experience is a deeply emotional and physically immersive venture into the world of migrants crossing the desert of the American southwest in early dawn light. More than even a creative breakthrough in the still emerging form of virtual reality, it viscerally connects us to the hot-button political and social realities of the U.S.-Mexico border.” 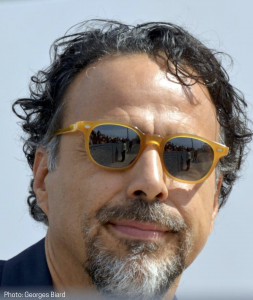 Alejandro G. Iñárritu is one of the most acclaimed and well-regarded filmmakers working today. Most recently, Iñárritu directed and produced The Revenant starring Leonardo DiCaprio and Tom Hardy, which he co-wrote with Mark L. Smith. The film, a tale of revenge set against the harrowing backdrop of the 19th-century American frontier, was released in 2015 by 20th Century Fox and earned Iñárritu his second consecutive Academy Award for Best Director. Iñárritu had won the previous year for Birdman: Or (The Unexpected Virtue of Ignorance). The dark comedy, which Iñárritu also co-wrote and produced, also won the prize for Best Picture, Best Original Screenplay, and Best Cinematography. With four wins in total, Iñárritu became first Mexican filmmaker ever to be named best director or producer in the history of the Academy Awards.

Among Iñárritu’s previous credits are the Oscar-nominated, Spanish-language film Biutiful; Babel, for which he was named Best Director at Cannes in 2006; and the critically acclaimed 21 Grams, which earned nominations for Best Actress (Naomi Watts) and Best Supporting Actor (Benicio del Toro). Iñárritu made his feature directorial debut in 2001 with Academy Award-nominated Amores Perros, a drama that explored Mexican society told through the perspective of three intertwining stories connected by a car accident in Mexico City. He began his career as a radio host and radio director at Mexican rock radio station WFM before transitioning to writing, producing, and directing short films and commercials under his Z Films company in Mexico.

Emmanuel Lubezki is known for his groundbreaking uses of natural lighting and continuous uninterrupted shots. With “Carne y Arena,” he continues to push technological boundaries and help redefine the cinematic future. For his work in Alfonso Cuaron’s Gravity (2014) and Alejandro Iñárritu’s Birdman (2015) and The Revenant (2016), Lubezki became the first cinematographer to win three consecutive Academy Awards. For Gravity, a science-fiction thriller set in outer space, he invented the 20-foot-high “light box,” an enclosure affixed with more than 4,000 LED bulbs for programming different projections of earth and space. The film was praised for the way it combined two shots through digital backgrounds of space to create the illusion of scenes done in a single shot. The following year, Lubezki used a similar technique in Iñárritu’s Birdman, making the entire movie appear as though it was photographed in one continuous take. He shot The Revenant entirely in the wilderness during a frigid winter, minimizing the amount of CGI and using only natural lighting.

A frequent collaborator of Terrence Malick in addition to Cuaron and Iñárritu, Lubezki has lensed such films as Malick’s Tree of Life and The New World, Cuaron’s Children of Men, Y Tu Mama Tambien, and A Little Princess, and Tim Burton’s Sleepy Hollow. In addition to eight Academy award nominations, he has received five ASC Awards, four BAFTA Awards, and the 2016 Royal Photographic Society Lumière Award for major achievement in cinematography. He was born in Mexico City and studied film at Mexico’s Centro Universitario de Estudios Cinematograficos, where he met his future collaborators Cuaron and Iñárritu.

“You take your shoes and socks off in a side room with other people’s boots and shoes littered about, and walk through into a space the size of a tennis court, covered in sand. The VR goggles go on, and you find yourself in a vast, baking scrubland on the US-Mexico border, as scared and hungry refugees trudge up to you over the horizon. Then a helicopter and two SUVs from border patrol show up full of cops with guns who aggressively arrest everyone, all around you. Night falls and there is a hallucinatory sequence showing refugees being tipped out of a boat. Then things become scarier still. Just when you had become used to wandering up to imaginary cops with their very real-looking semi-automatics, and nervously accustomed yourself to the fact that all their movements are choreographed and that you are to them effectively a ghost, invisible – you realise that the software of this exhibition has tracked your position and eyeline. These cops can and do get in your face. It’s a theatrical triumph.”
— The Guardian
“After weeks in the desert, dehydrated and afraid, refugees and migrants who are apprehended crossing the United States-Mexico border are regularly locked in what are called ‘las hieleras’: the freezers. They are meant to be short-term holding cells — they have no beds — but they also exact a kind of extrajudicial punishment. . . . Children are separated from their families; detainees are deprived of food. Sometimes their lips split. Sometimes their skin turns blue.

“The cold of the hieleras is the first thing you feel in ‘Carne y Arena’ (‘Flesh and Sand’), a groundbreaking hybrid of art exhibition, virtual reality simulation and historical re-enactment by the Mexican film director Alejandro G. Iñárritu. . . . ‘Carne y Arena’ is not a film, and it succeeds by acknowledging that virtual reality is a wholly different medium, posing different theoretical and narrative challenges. Editing, essentially, is gone. Framing is gone too. Characters must be positioned in three dimensions, not just two. The medium is almost a hybrid of video game and live theater, and to excel, you have to think like a philosopher as much as a techie.”

— The New York Times
“After the VR piece, viewers exit into a narrow hallway where a row of video screens in the wall play short biographical sketches that feature the real immigrants whose stories inspired ‘Carne y Arena.’ If you are expecting something out of a local history center, think again. . . . Each is embedded deep into the wall, at eye-level, requiring you to get up close and make eye contact with the person whose story is being recounted.

“There is the young mother who fled Central America after a gang member threatened to chop her child into pieces. The Border Patrol agent who watched life escape from the migrants who didn’t quite make it. The young man who made the crossing at age 9 and ultimately went on to receive a law degree at UCLA. And there is the excruciating anecdote about a young boy abandoned in the desert because he couldn’t keep up.”