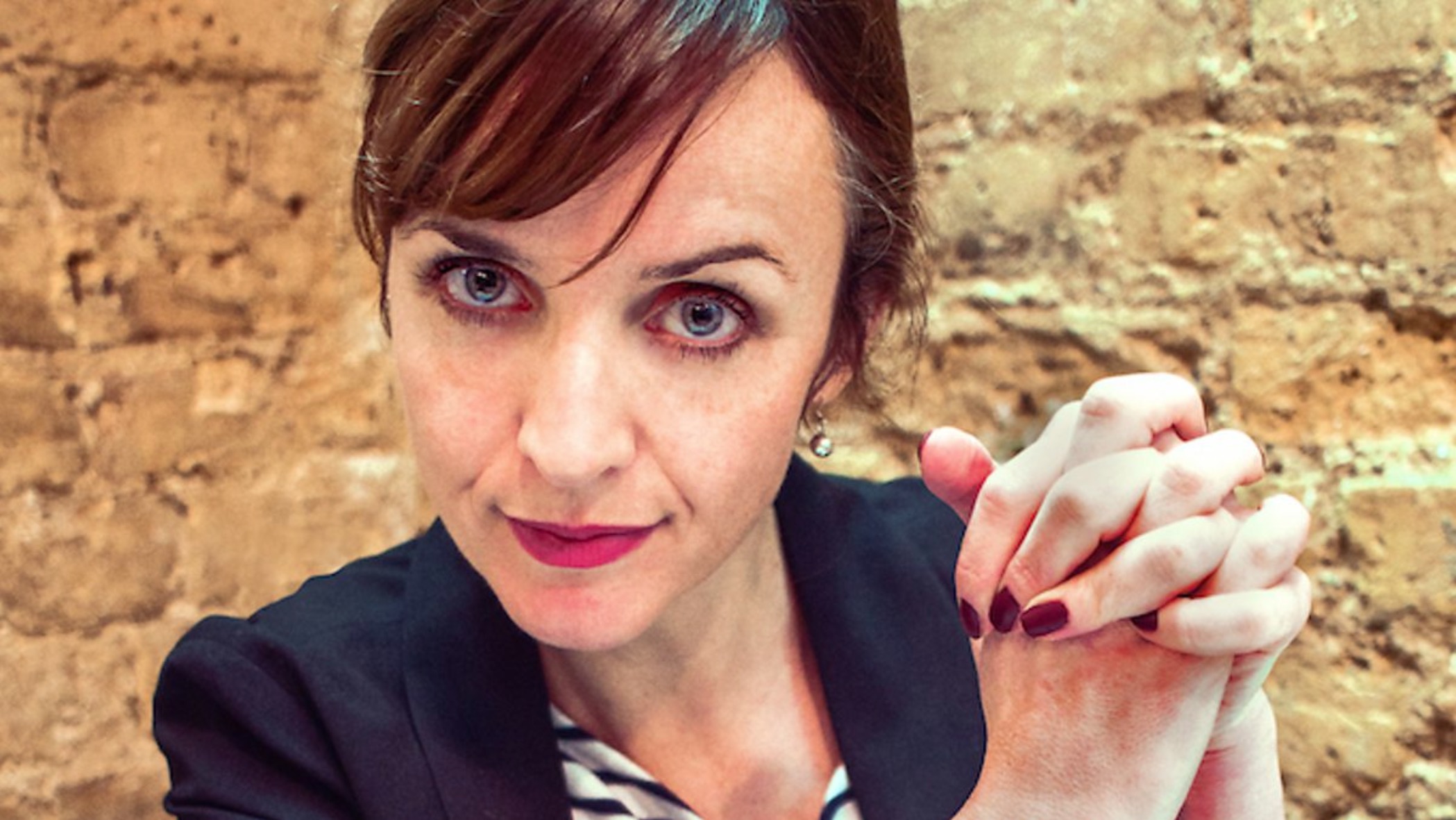 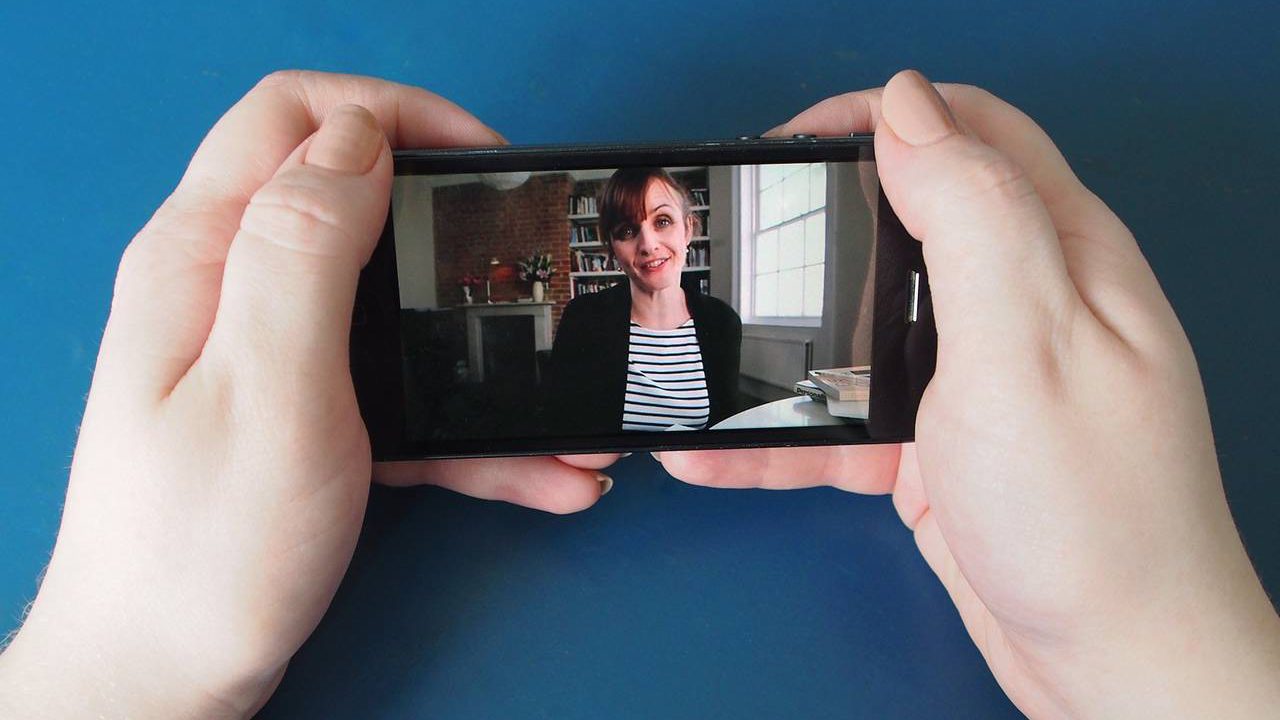 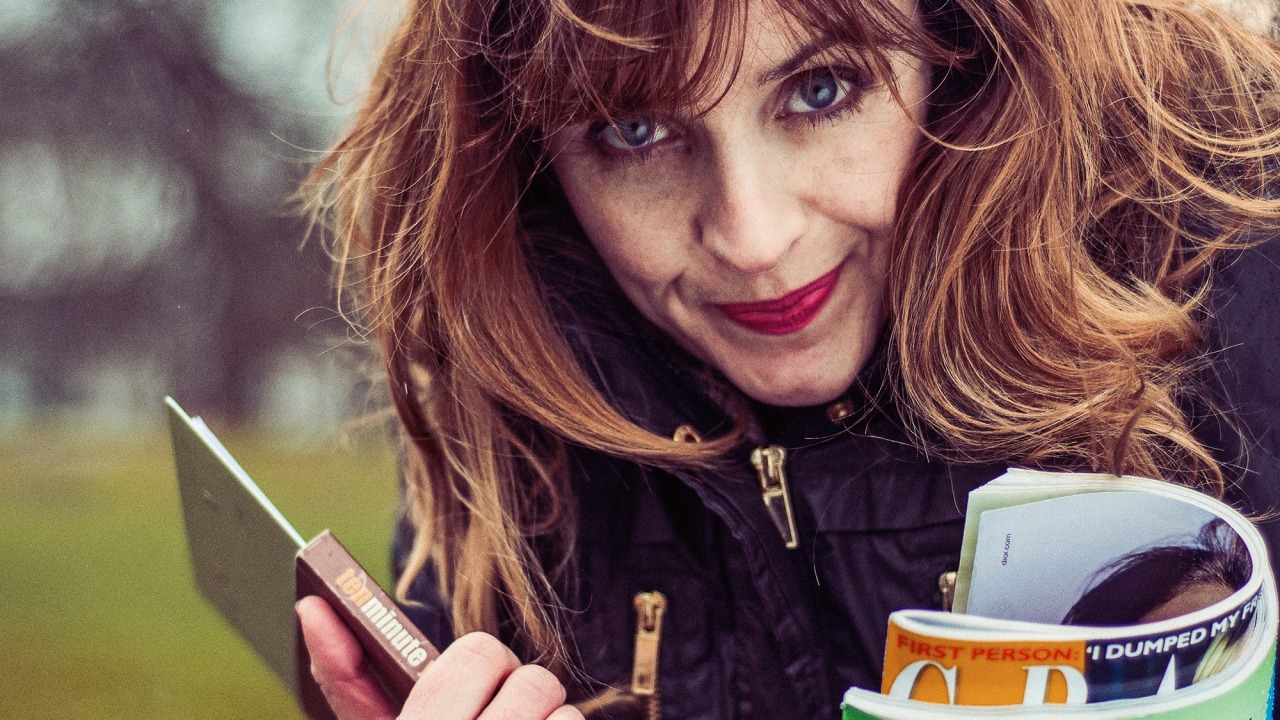 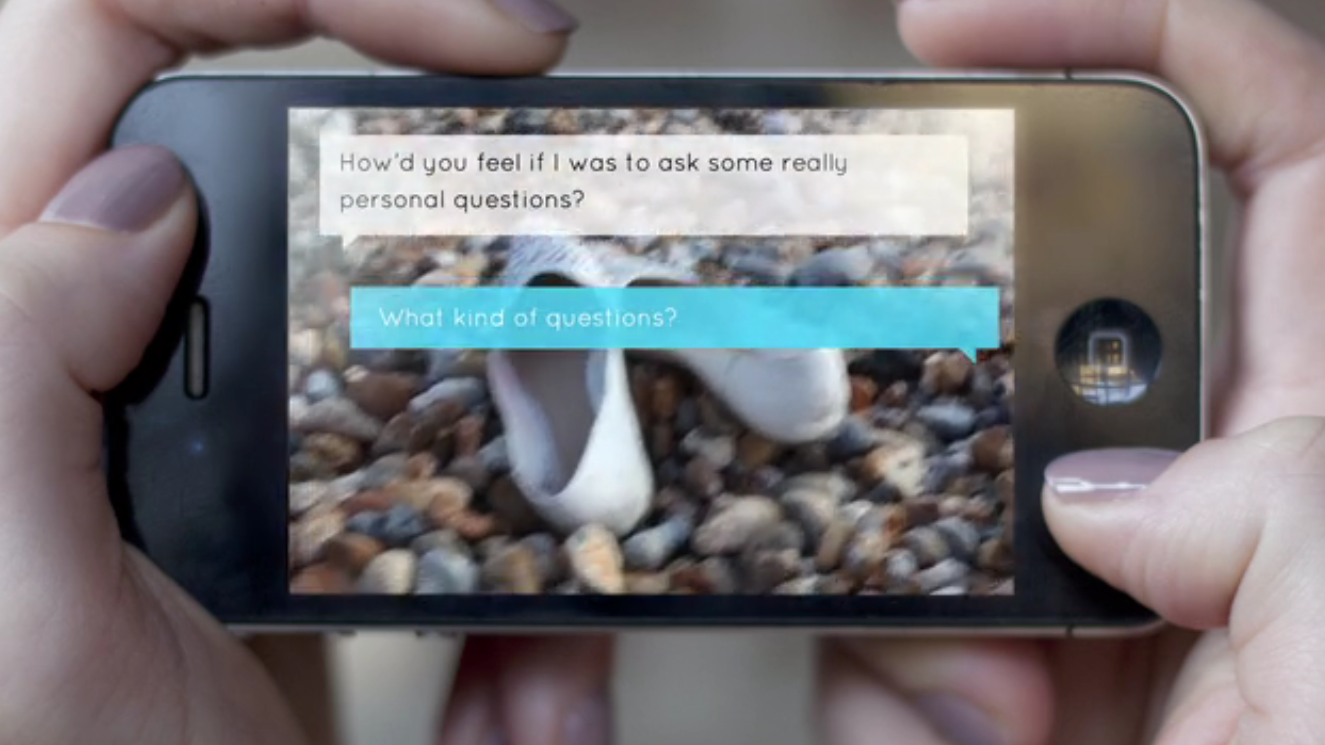 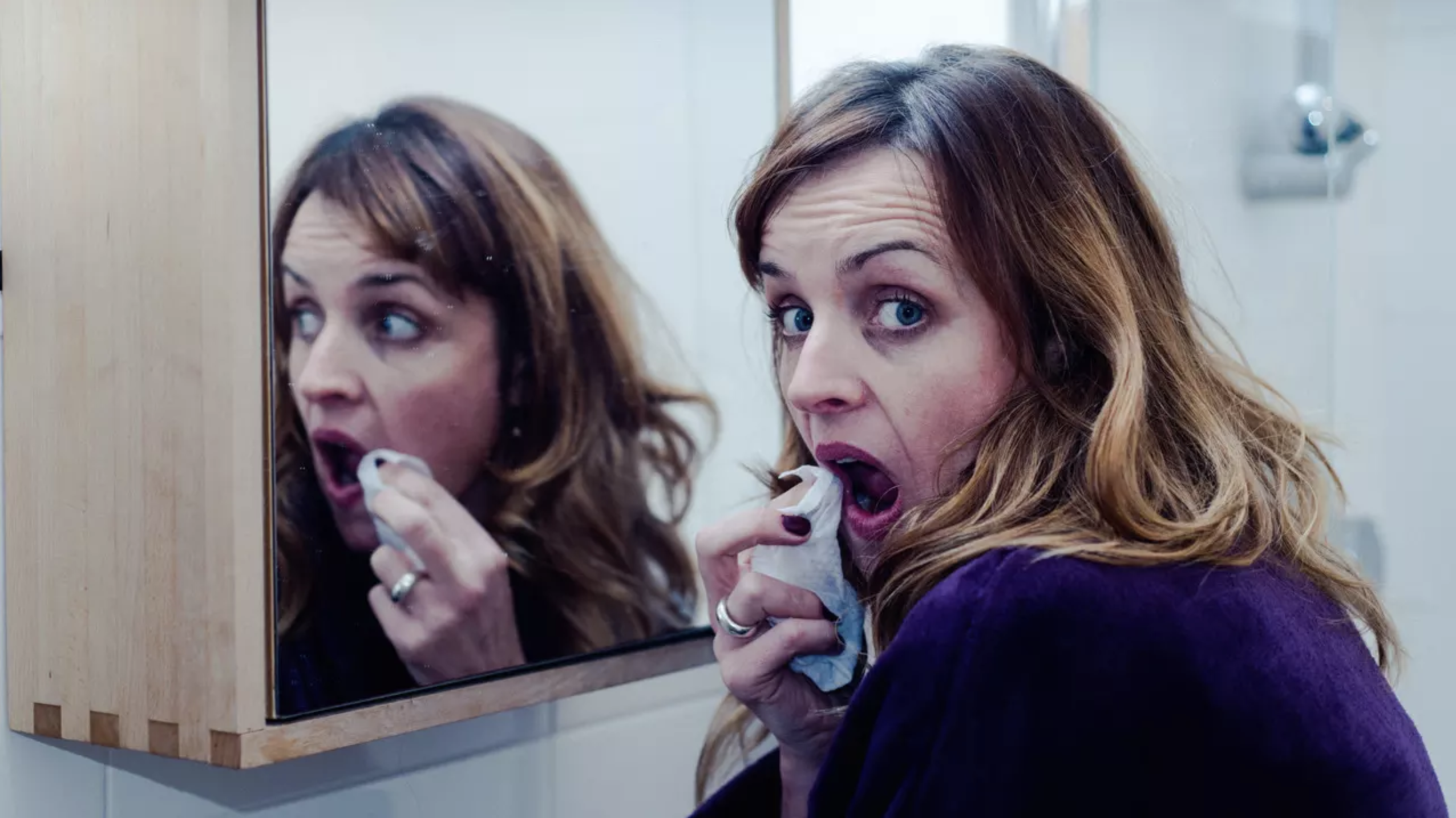 “Why do we quite love it when Facebook pops up and provides a video of our life from the last year? Rather than the feeling that that is suspicious and unwelcome. Billions of people really welcome that. There is this solipsistic impulse that . . . as long as it’s me reflecting back to me in a way that feels knowledgeable, we sign up to it. We don’t mind that at all. You end up setting a positive feedback loop with software by saying, ‘By all means, scrape up information about me so that you know my taste and feed it back to me.’”

App stores for mobile devices sport a variety of “life coach” offerings — software that promises to help you be your best self. The members of Blast Theory, working out of a Victorian ice house in the English seaside town of Brighton, created an artwork in the form of one such app. While this app starts by trying to get to know you, it soon veers off into what might be considered inappropriate behavior. Blast Theory’s fictional coach—a young woman named Karen, played in the app’s videos by the British actress Claire Cage—turns out to have serious boundary issues. First she’s asking you about your childhood and your outlook on life; next she’s telling you about her recent divorce and her new roommate, a guy named Dave whose room is right down the hall. Not long after that she’s urging you to to help rifle his belongings while he’s out. How will you respond? The answer says more about you than the standard personality quiz ever could.

Ultimately, however, Karen is about humans’ relationship with technology. “We’re interested in the intimacy of mobile phones,” Blast Theory’s Matt Adams told Digital Storytelling Lab member Frank Rose for The New York Times. “How they might be thought of as a cultural space. Karen was an opportunity to take this strategy further — how you might engage with a fictional character who is software-driven.” The answer is, with a great deal of ambivalence — which is precisely the point. “We know we’re making a satanic bargain,” he added, “but it’s a rich, murky space . . . something we’re very drawn to and very unnerved by at the same time.” 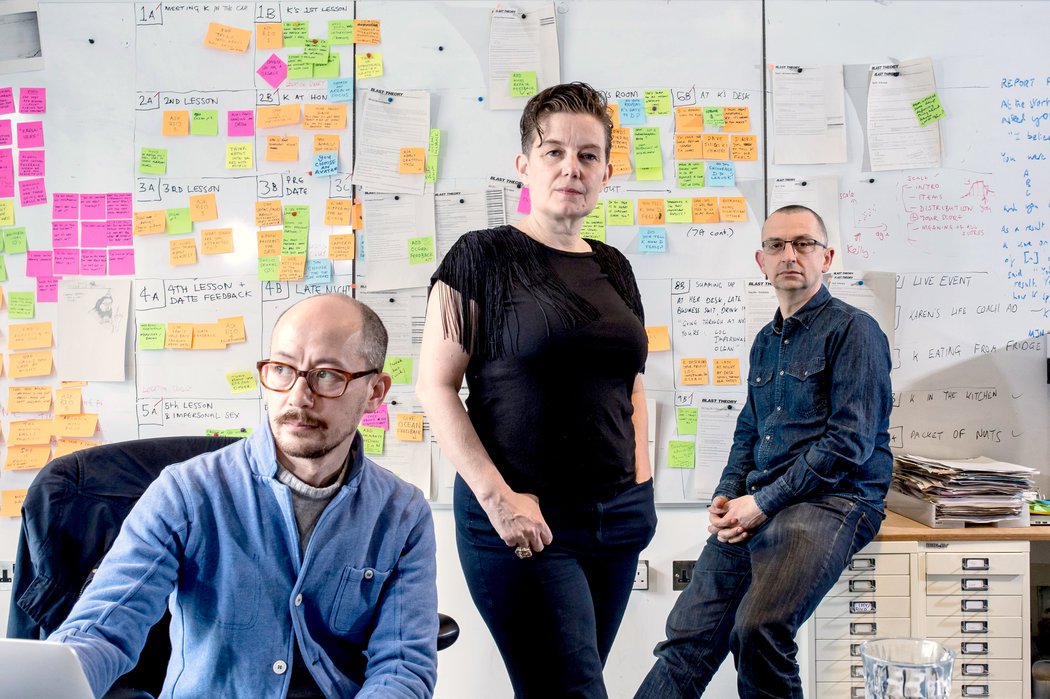 Blast Theory — Nick Tandavanitj, Ju Row Farr and Matt Adams (photo by Andrew Testa for The New York Times) — is a pioneering artist group creating interactive art that explores social and political questions while placing audience members at the centre of the work. Since 1991 they have used interactive media to create new forms of art that engages audiences across the internet, in live performance, and through digital broadcasting. Drawing on popular culture, technology, and games, their work often blurs the boundaries between the real and the fictional.

Early works such as Gunmen Kill Three (1991), Chemical Wedding (1994), and Stampede (1994) drew on club culture to create multimedia performances – often in unusual spaces such as film studios and accompanied by bands and DJs – that invited participation. A nine-month residency at Künstlerhaus Bethanien in Berlin led to Kidnap (1998), in which two members of the public were kidnapped as part of a lottery and the resulting event was streamed online. Desert Rain (1999), a large-scale installation, performance, and game, marked the beginning of their collaboration with the Mixed Reality Lab at the University of Nottingham. The partnership has yielded four BAFTA nominations, a Prix Ars Electronica, and academic papers presented at conferences in computer science, computer-human interaction, and ubiquitous computing. This dialogue between scientific and artistic research now forms a core thread of Blast Theory’s practice.

“Like actual life-coach apps, Karen starts off by asking about your emotional state: Would you say that you are sometimes sad but have a mostly optimistic outlook? That you had a happy childhood? That you get stressed out easily? That you try to think good thoughts no matter how badly you feel? Other apps, however, are unlikely to drop in a mention of their recent divorce — or drag you down the hall to peep through a partly open door at some guy named Dave who, she breathlessly informs you, is stark naked. Later, as you learn more about Dave and Karen and their emotionally complicated relationship, you’ll be invited to join one or the other of them in some rather unseemly escapades. How far will you go? The answer can be as revealing as anything you tell Karen directly.”
— The New York Times
“Karen isn’t a disembodied voice, like Siri or the operating system played by Scarlett Johansson in ‘Her.’ She comes to life in interactive video sequences, peering into a camera from her apartment. She invites clients to answer questions that profile their personality, so she can get to know them better.

“But then things get a little weird.

“‘Her personality is someone who desperately wants to be liked,’ said Matt Adams, a co-founder of Blast Theory. . . . ‘She develops a really strong friendship with you really quickly. . . . The real twist in the story is you end up life-coaching her far more than she is life-coaching you.’”