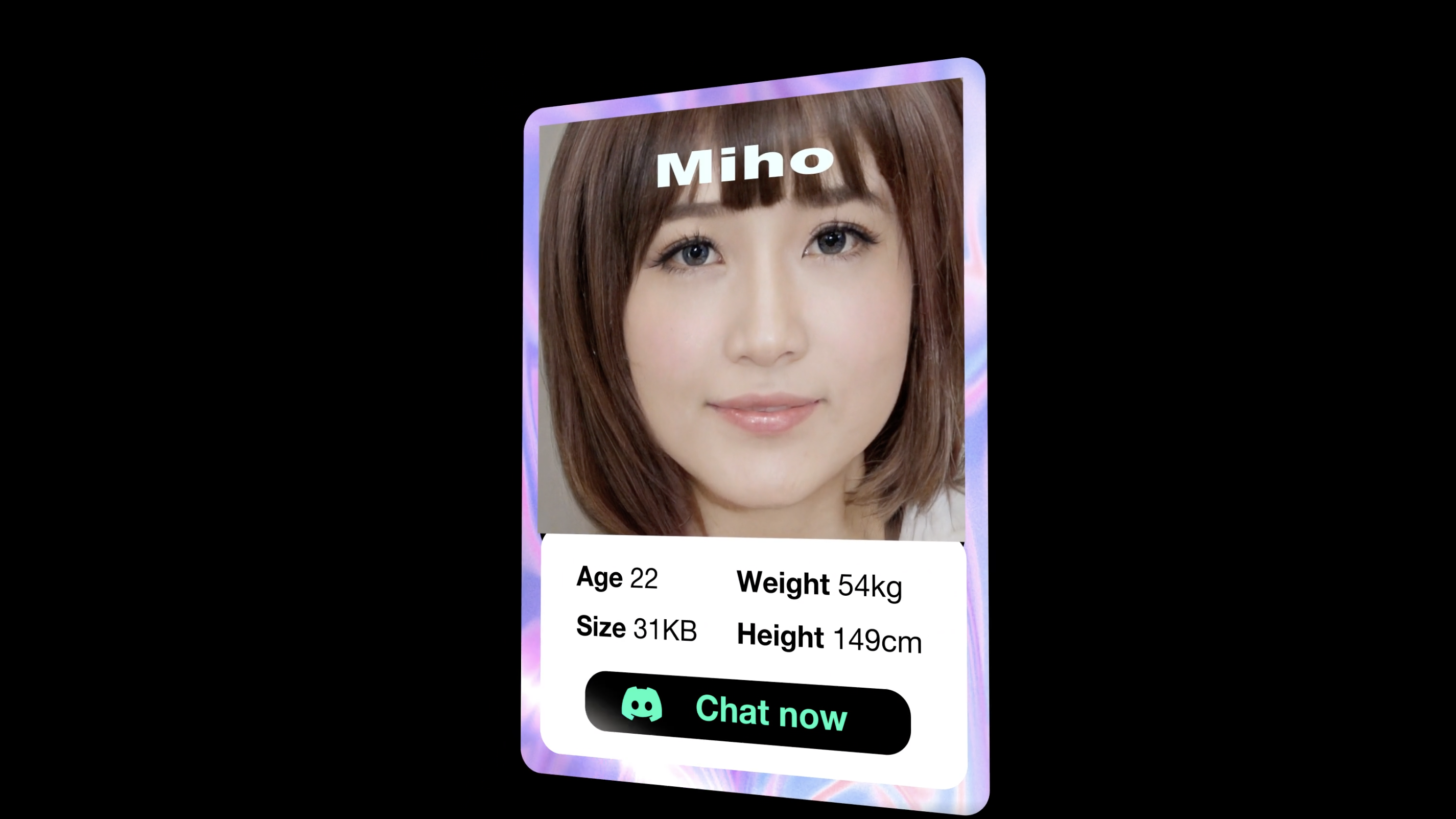 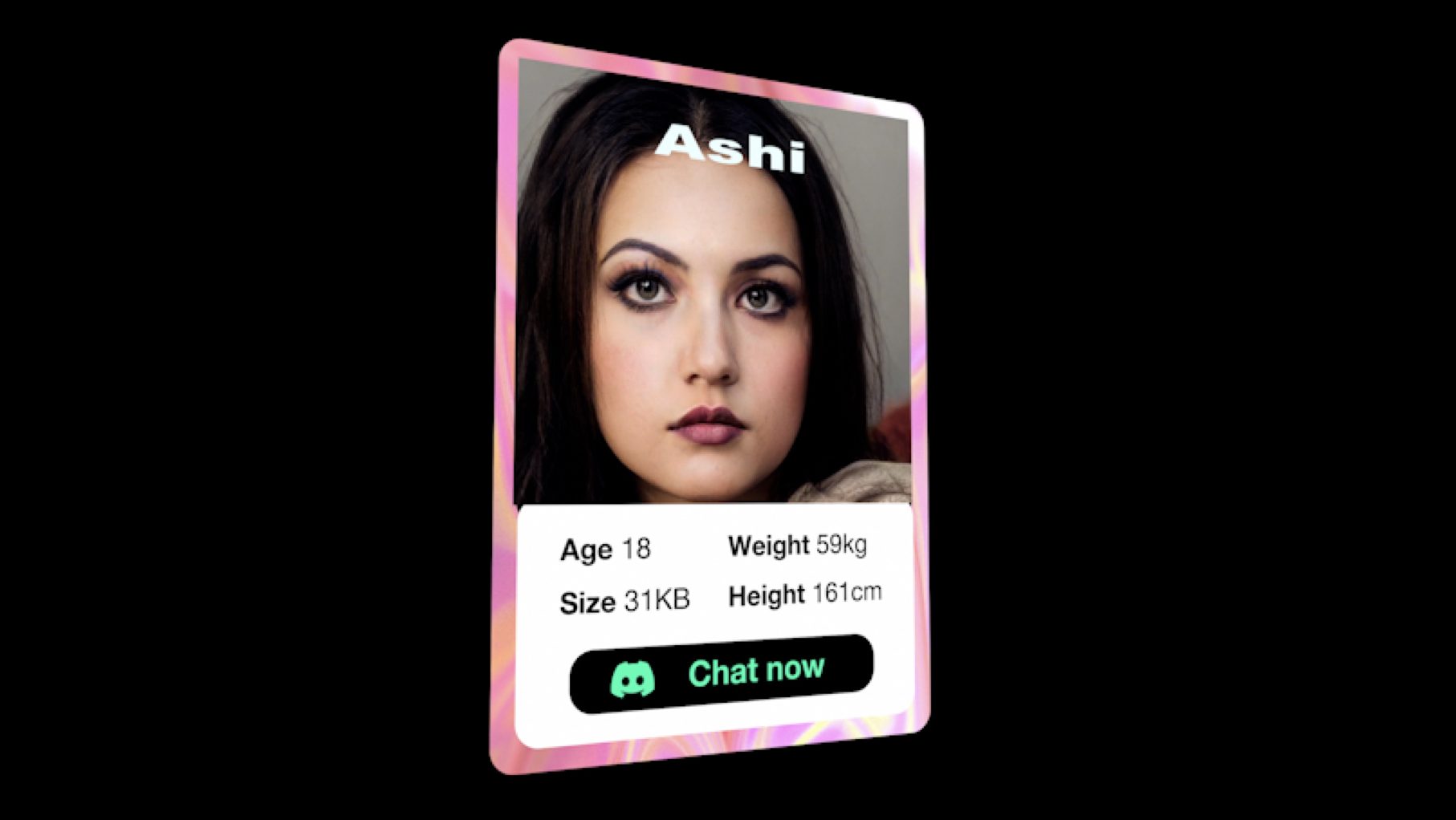 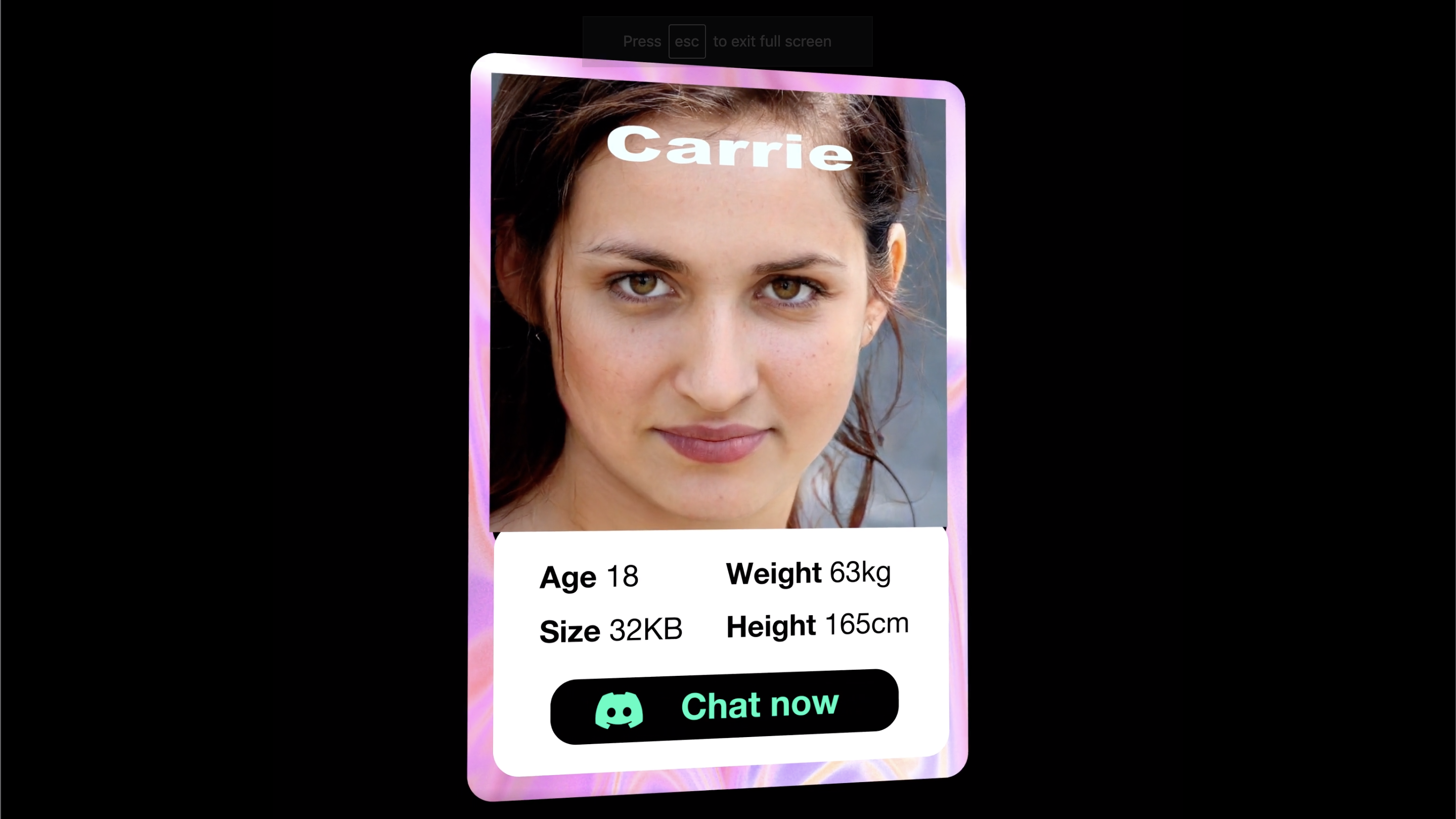 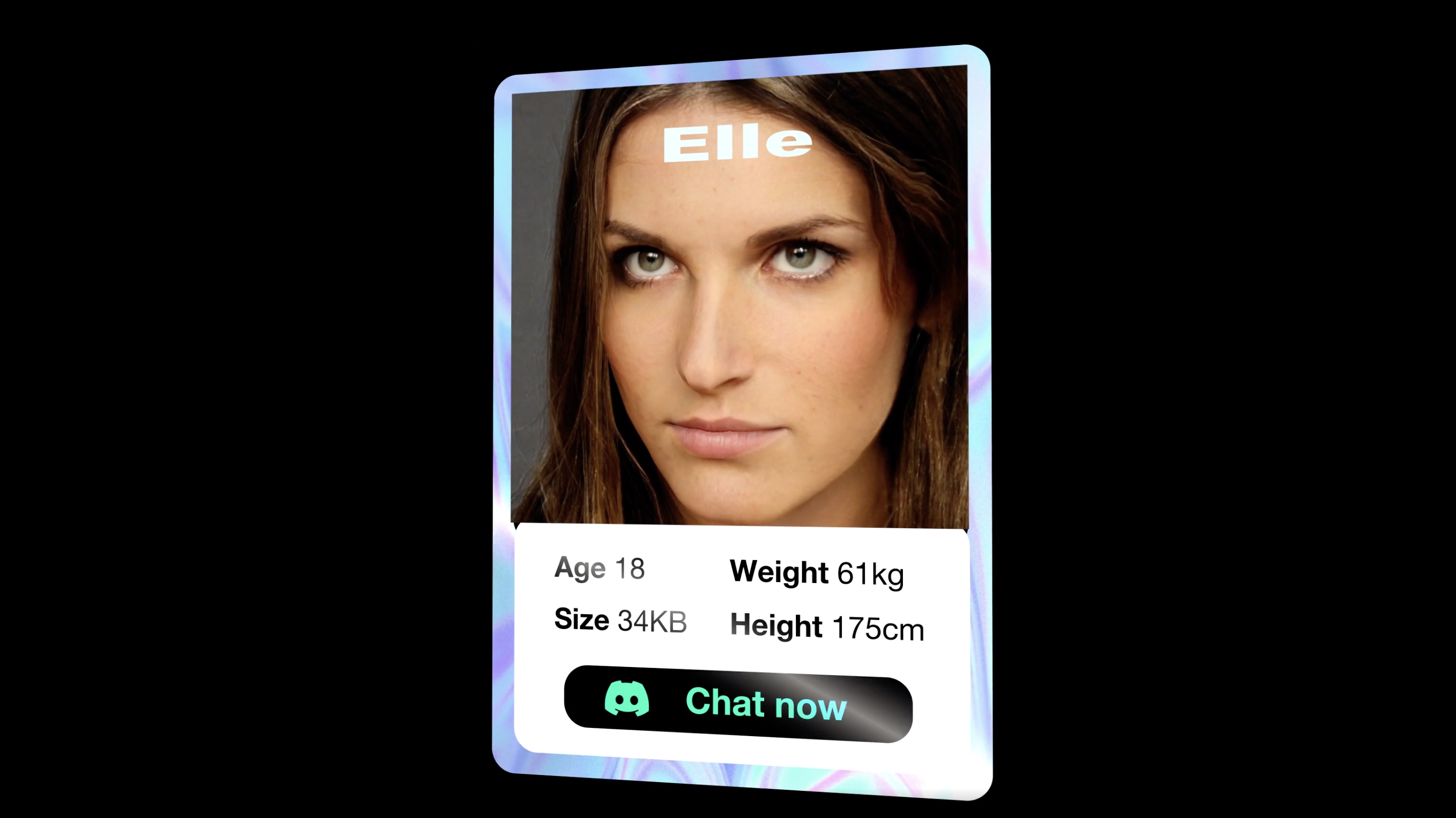 “I’m interested in sharing things that I think are beautiful, fascinating, or funny. I do think that fascination can be morbid, and that humor/satire is extremely powerful. I’m not afraid to be honest about the fact that I like transgressive imagery, sexuality and extremes of all types. But I take it for granted that I’m preaching to the converted—meaning, people wouldn’t follow me if they didn’t want to be seeing that stuff. . . . I’m not that interested in ‘triggering normies’ or whatever, I find that pretty tedious.” —Ben Ditto

Dates are a series of four characters generated by a neural network containing embedded metadata with encoded personalities. The faces of each “Date” were produced by a generative adversarial network (GAN), a machine learning technique that involves feeding photographs of real people to a computer program and then asking it to generate its own images of people. Each Date was animated using open source AR and trained on various characters from literature and cinema to have a specific character. The code for all this was then embedded on the blockchain, along with a link to a private Discord server for each Date.

The work explores the space between open source code and biological data and foresees a near future when the boundaries between the two are completely erased within a proprietary metaverse, where our characters will be supplemented and augmented by code and the perception of our identity will be malleable by ourselves, by corporations and by hackers. The work speaks in the vernacular of the sex work economy and is for sale within the growing crypto market, a decentralized world of collectibles where ownership of bodies and sexuality can be tokenized, traded and fractionalized.

Each Date can be accessed only by the owner of the work. The four Dates are currently for sale on the OpenSea NFT marketplace. If you buy one, it unlocks the Discord server and you can talk to your Date. 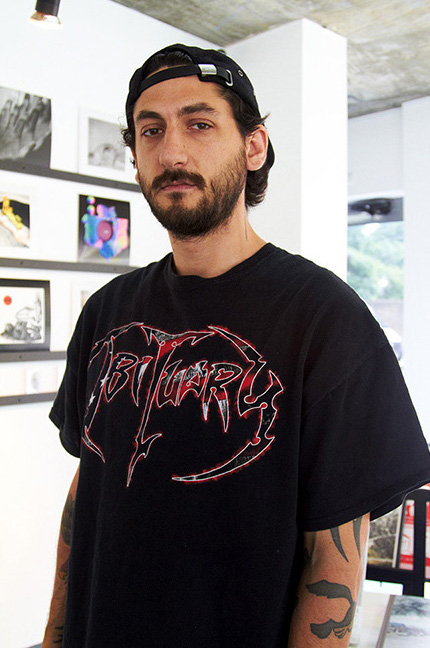 Ben Ditto is a London-based creative director who in 2009 started Ditto, a highly idiosyncratic publishing company whose titles include Frozen Chicken Train Wreck, Skinhead: An Archive and Ninja Turtle Sex Museum. He works across multiple platforms, directing moving image, CGI, augmented reality, virtual reality, print, live experience and creative coding projects while working with the likes of Alexander McQueen, Louis Vuitton, Vivienne Westwood and Grimes. In 2019 he worked with a group of designers and coders to create a campaign that would address environmental collapse, surveillance culture and social-media nihilism for The 1975 song “People.” Earlier he travelled to Ukraine to document the rave culture that flourished there before the Russian invasion.

Ditto was recently interviewed by the artist Fleming Mason for the London fashion publication 1 Granary. Their conversation touched on hacking, NFTs, technological futures, his artistic roots, and finding the subtle beauty in violence. Following are excerpts; read the full interview at 1 Granary.

Fleming Mason: Hardly anyone knows anything about the devices and technological architectures that we use every day. We’re told that the solution is to learn how to code rather than actually focusing on how technology and human affairs interlink.  I see it a lot within your work, for example, you’ve recently used AI to question concepts surrounding ownership and censorship. Can we talk about the CryptoGraphic exhibition and the artwork you contributed, Dates?

Ben Ditto: The idea was to make an exhibition that used OnlyFans as a gallery space. It was a statement about lots of things: sex, censorship, the line between fine art and pornography, ownership of the body, commodification, technocapitalism, all these things. . . . I’m not anti-NFTs at all, but I don’t like the pointless ones – I’m not going to put my life savings into an ape. I think the future of ownership and our senses of self and identity are within that world. All of that is becoming more and more wrapped up in cryptography; the metaverse – whatever that means. . . .

“Weaponized AI is on the level of chemical weapons – to have AI impersonate humans should be a clear line in the sand.”

The thing I like about it is that none of it’s real, per se, but my hand is very present in it. I generated hundreds of faces to find the ones that I wanted. I edited the text heavily to create the characters. It’s a bit of a thought experiment; it’s hard to separate what’s real from fiction. You and I are having this conversation now, but it won’t be long until it will be impossible to know whether this is me talking to you or something that I’ve trained on me to talk to you. How do you know it’s not already? Just imagine what’s going to be happening in 10 years. . . .

The EU is already discussing ethics and legislation for AI; they believe that it should be considered illegal to have AI impersonate a human being. This is quite a top-level, blanket piece of ethical legislation, but it makes sense to me. Weaponized AI is on the level of chemical weapons – to have AI impersonate humans should be a clear line in the sand. ‘Dates’ was also a comment on loneliness; the notion of having a partner that doesn’t exist, that cares for you because you’re so lonely. Realising that there’s nothing special or interesting about you is a very core part of the male experience in modern life. I think that “Dates’ feeds into that too.

Censorship is a very present issue with artists and centralised media. Do you think things will change in Web3?

Ditto: Unfortunately, it’s got two layers. I think we’re in a situation where the only people who can afford to build the technology that we all need to use will be proprietary about it. They are the worst people in the world, Meta, Google, and Apple, but they matter. Google and Apple, they matter. They’re the only people with the resources to develop the tech. The thing is, it would be hypocritical of me to be that down on it because I run my life through Instagram, which is a Meta platform. . . . I think that there are lots of very exciting things happening with the metaverse and Web3, but no one has the physical hardware thus far and I’m a little bit sceptical about what will happen when that hardware does become available. Will it be so proprietary? They’ve already banned any kind of sex anywhere on Zuckerberg’s Metaverse, which is boring and, frankly, stupid. Sex is a huge driver for progress, it’s responsible for developments in storage space and digital imaging and payment systems. I don’t think there’ll be a poor Metaverse and a Facebook metaverse. It’ll be way more nuanced than that. Sadly though, I think those are the two big driving factors, one that’s a bit gross and one that’s just fucking awful.

“They’ve already banned any kind of sex anywhere on Zuckerberg’s Metaverse, which is boring and, frankly, stupid. Sex is a huge driver for progress.”

]I’m very aware of this term “gamification.” All my research seems to point towards virtual spaces being vessels for further cloaked advancements in what is essentially endorphin engineering. I’m currently of the opinion that crypto has somewhat turned investing into dopamine slot machines like Instagram. It seems obvious why crypto is so popular amongst young people.  Surely the question we must ask about gamification is: who is winning? Is it these proprietary establishments?

Ditto: I’m not too cynical about the world of gaming. It has more integrity than Facebook and the amount of effort and thought that goes into online gaming is enormous. . . . In the grander sense though, yes, everything’s gamified: Instagram is gamified narcissism, LinkedIn is gamified career progression. But that’s separate. The notion of an augmented webspace is not the same conversation as the gamification of all human behaviour. They’re adjacent, but not the same conversation. 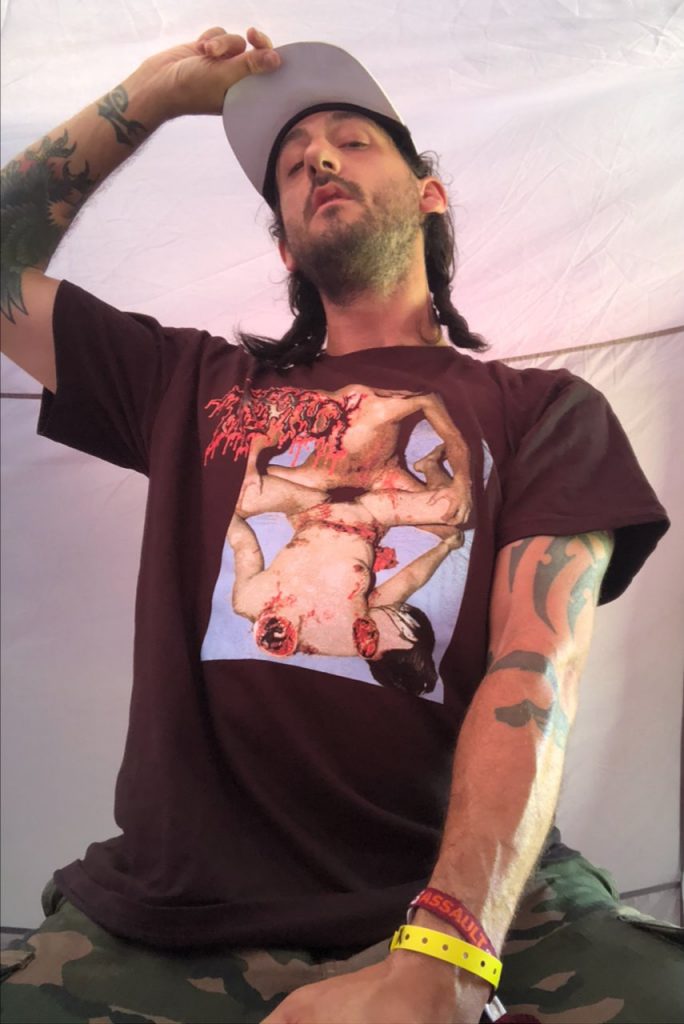 Ok, so I wanted to talk a bit about your more personal work. Where did your fascination with the abject begin? You know, this combination of sex, guts, and baselessness.

Ditto: I’m not sure abject is the right word. . . . I can’t put my finger on it, but as far back as I can remember, I’ve always been interested in extreme imagery. When I was a kid, there was no internet at all. I used to spend a lot of time in the library, just taking everything in, similarly to what we do now by scrolling through Instagram. My parents weren’t generally strict, but they were on what we were allowed to see. So, before I was allowed to see “horror,” I had created an idea of it in my mind. My auntie used to talk about horror films like Psycho in very visceral terms, but then when I saw the real thing, it was somehow never up to what I thought it would be like. Back in those days, if you heard of a film, you could go to a video shop and on the back there were little stills from every film. I remember buying the Time Out guide of every film review they’d ever done – a huge 1,000-page book – and I would read the synopsis and the review, and then go and look at the pictures at the back of the shop and make up the film in my mind because I wasn’t allowed to watch it. I think creating that idea of horror and “transgressive-ness” started as far back as I can remember.

“Meet Ben Ditto—renaissance man of the internet age. The creative director and journalist has dabbled in everything from crypto to porn, collaborated with brands like Maison Margiela and Louis Vuitton on ambitious campaigns, and helped launch Dazed Beauty alongside Isamaya Ffrench. But on Instagram, he’s @ben_ditto2.0, a purveyor of nihilistic memes and breaking news. When the latest Russian invasion began in Ukraine last month, Ditto turned his focus toward coverage of the crisis, transforming his account into a compendium of grassroots conflict reporting, Russian propaganda clips, and deadpan memes that highlight the absurdism of internet activism in the midst of a reality-warping tragedy. The descendent of Ukrainian and Belorussian refugees who fled their homes during World War ll, Ditto, who was raised in London, has built his own relationship with the region through his work in nightlife and music. ‘There is a spirit to youth culture in the music scene there that I absolutely adore,’ he says, ‘Watching it get smashed to pieces is horrifying.’”
— Interview
“‘Will we harness technology to become more holistically well, or will it destroy us?’ asked Ditto. ‘I think that there's no answer to that stuff.’”
— Dezeen

Previous
Forest Of Us