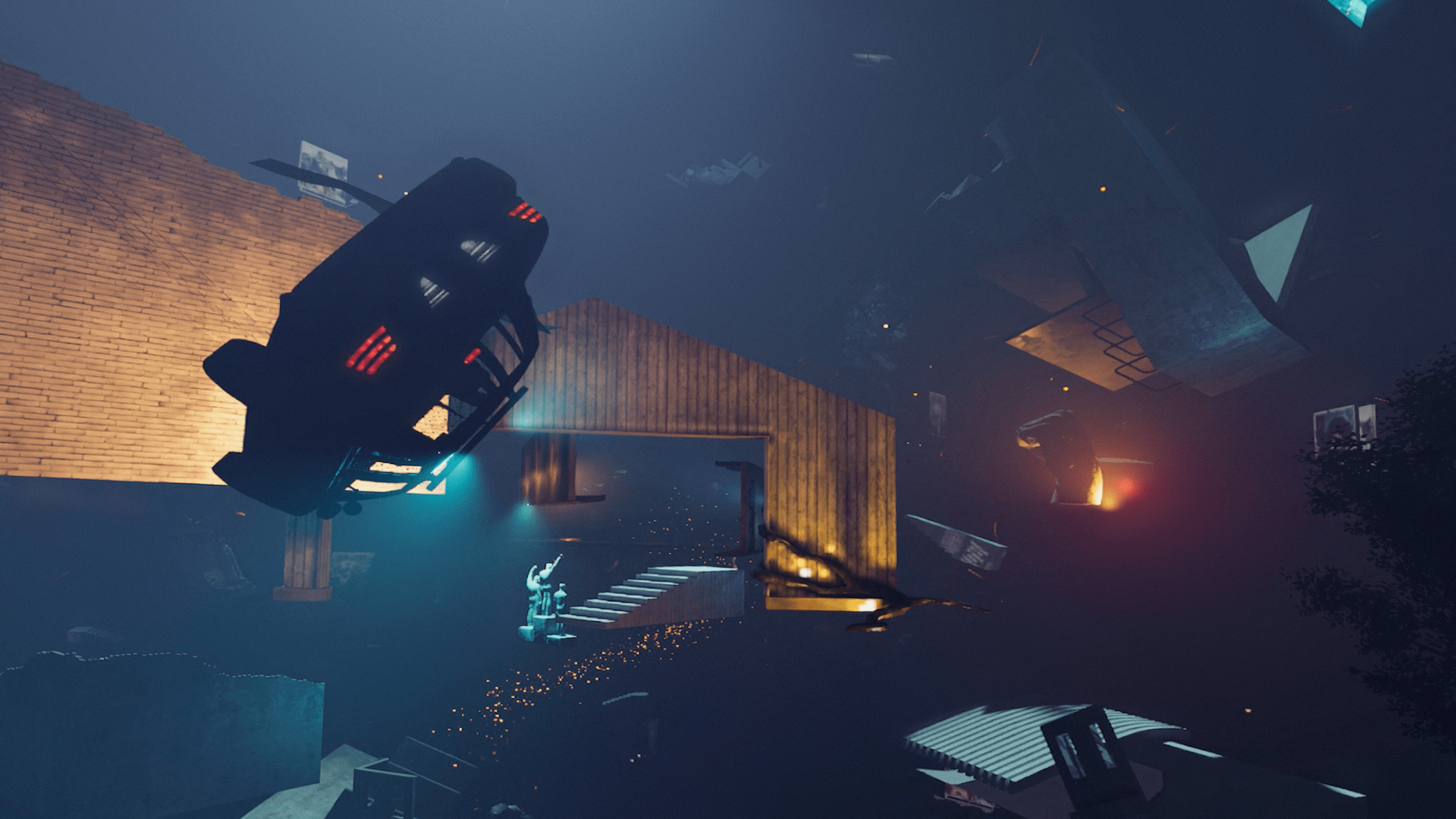 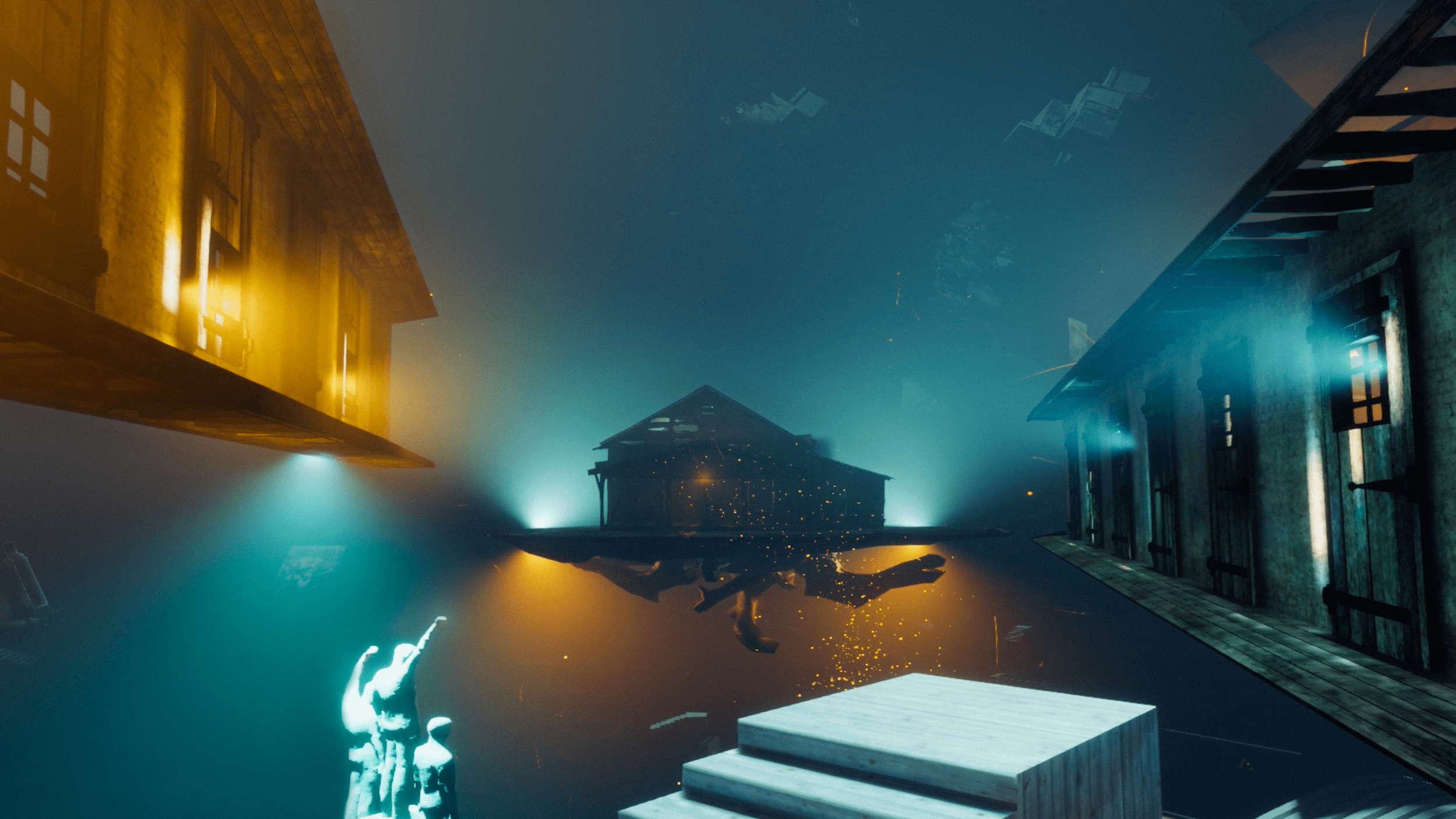 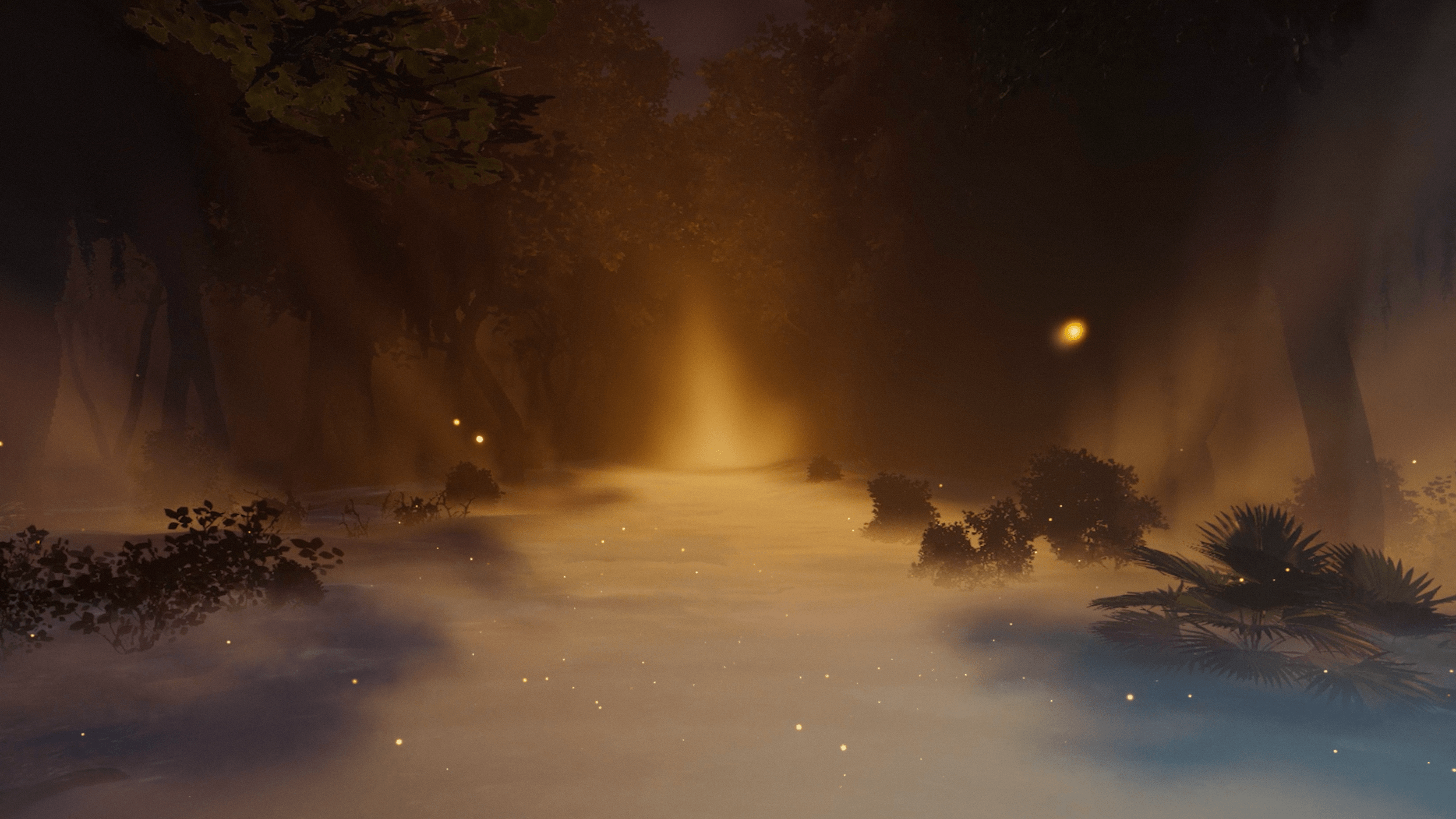 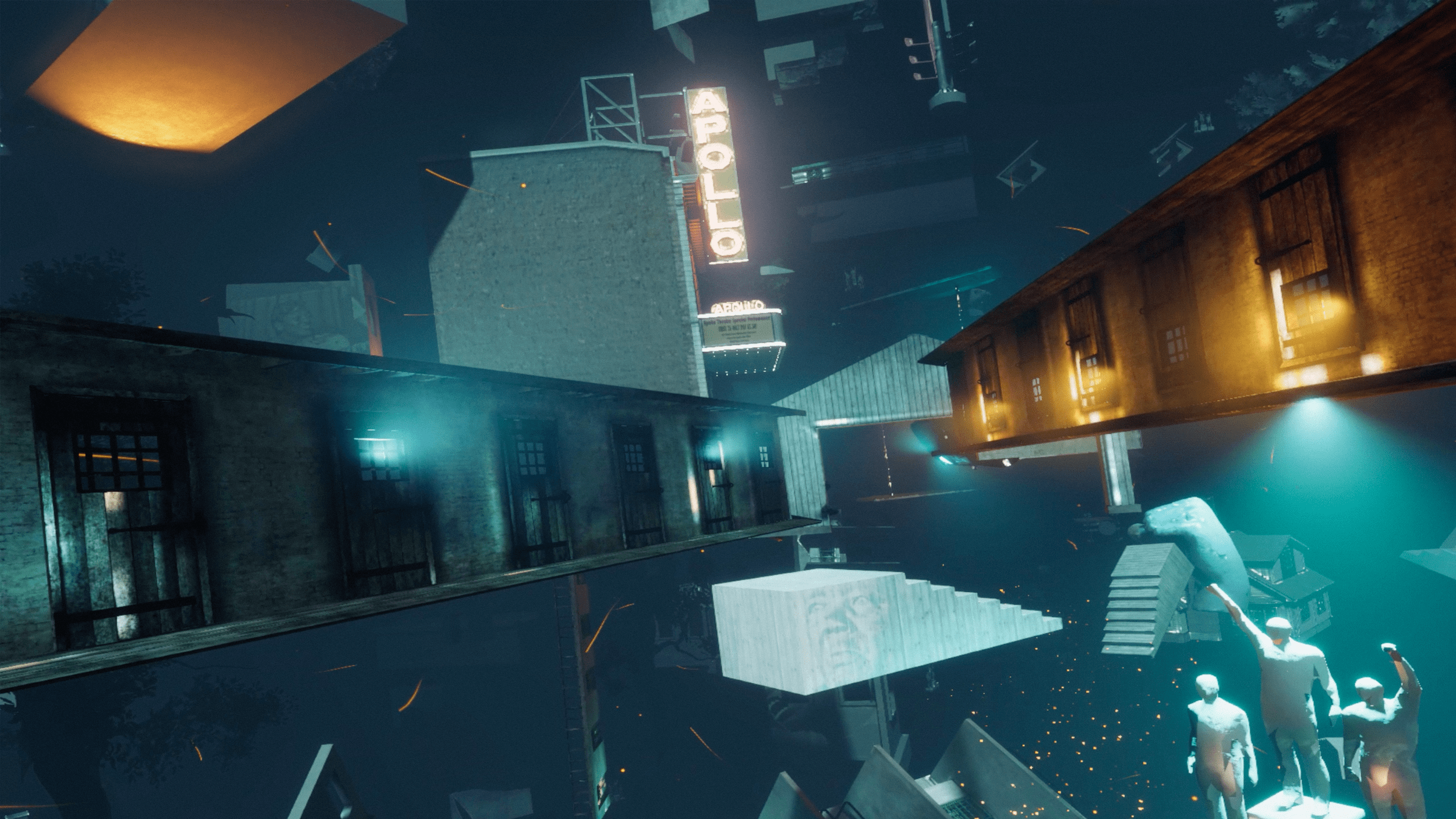 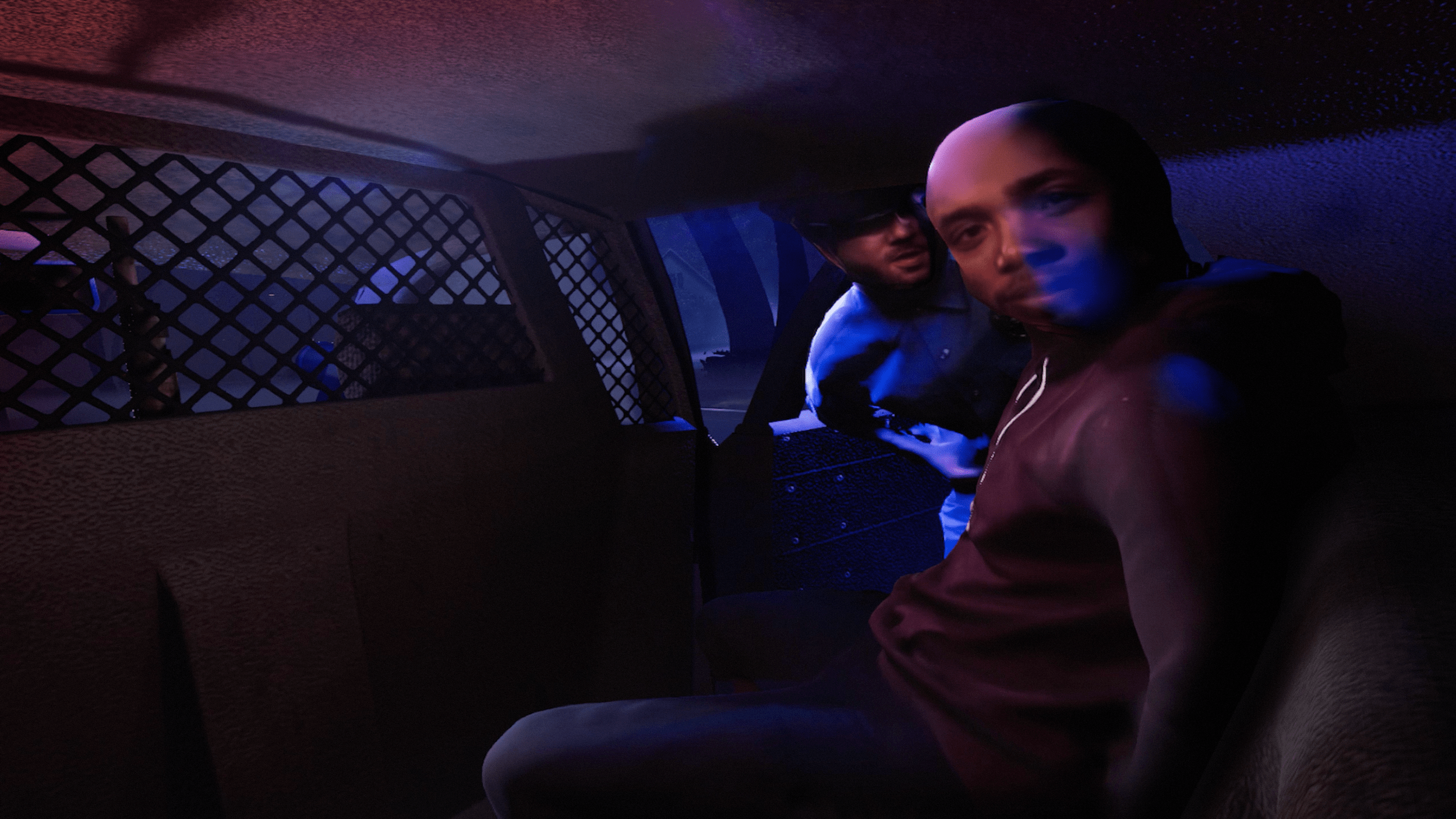 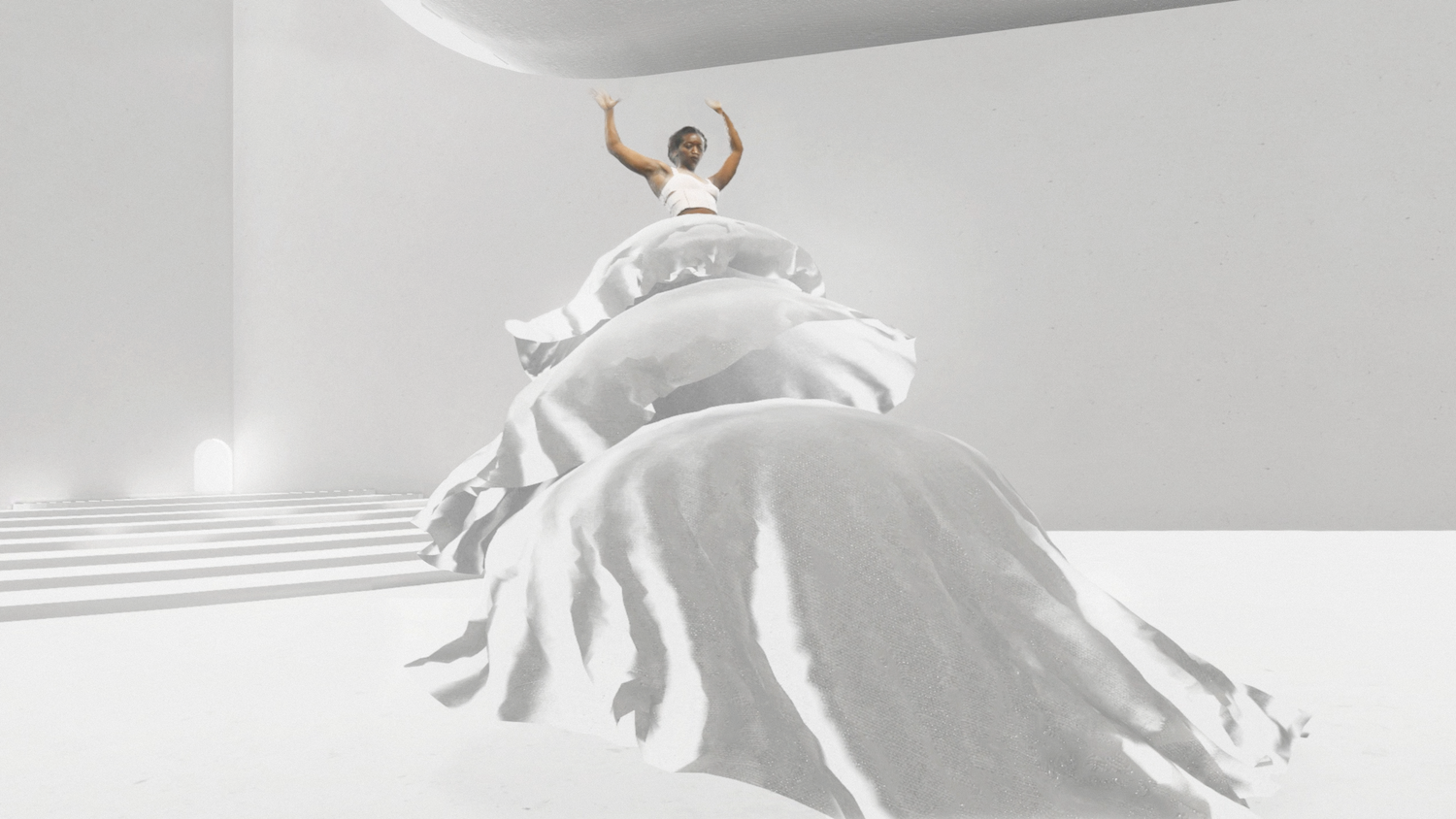 “It all has a purpose, and the purpose is to show that the past is sitting on our shoulders. What we’re experiencing today, our ancestors experienced a variation of 300 or 400 years ago. And, we’re compelled to make that statement as part of our own healing process, and to acknowledge that the oppressive structures persist but our future can be different. That’s why we took this collaborative journey. We were drawn to the three-dimensional format to help us and our communities reckon with this inversion of time and space, in order to think in a creative way about how to change the future world for ourselves.”

The Changing Same is an immersive, room-scale virtual reality experience in which you travel through time and space to witness historical experiences of racial injustice in the United States. Episode 1, “The Dilemma,” takes you on a time-travel journey to contemporary sites along the last route of Claude Neal, a 23-year-old Black farmhand in the Florida panhandle who in 1934 was arrested on suspicion of raping and murdering a 19-year-old white woman, captured by a gang of whites who announced publicly that he would be lynched, and subsequently tortured, castrated and hung — after which the mob mutilated his corpse and set fire to houses and businesses owned by Blacks.

In this VR experience, the user accompanies the ghost of Claude Neal to retrace the route and meet his descendant community today as well as his ancestors in the era of slavery. It’s a haunting story about the uninterrupted cycle of history of white racial oppression, past and present. But then, at the end of 400 years of magic-realist travel, you find yourself in an Afro-futurist world where we imagine an equitable future for all.

JOE BREWSTER: For me it’s very important to claim our [Black American] rightful place in history and also to recontextualize history; we do that using all media. Storytellers are the keepers of culture anywhere in the world. The problem is that our history has been recontextualized from a white supremacist lens and our contributions have been marginalized. We have made significant contributions to all areas of American society and we must shout that out. More to the point, why ignore new story technology as a tool to reach young minds? We are not giving up any space in terms of new ways of telling stories.

MICHÈLE STEPHENSON: The aesthetics and the story were part of the decision to use VR, too. Our previous short film worked as an inspiration for this experience but we needed to create something different here. Mostly, to play with time in a three-dimensional space and collapse it in a way that could allow us to connect past, present and future, both on an emotional conscious level and on an unconscious one. To reach this goal and to affect you on this different, less conscious level, it was also important that our work be grounded in magical realistic storytelling, especially considering the difficult topics we were confronting. Our magical realism approach also pays homage to the culture of resistance that we are a part of and that our ancestors leaned on from generation to generation.

We felt that VR – and especially volumetric filmmaking – would allow us to do all that better than any 360 video could ever do. So, the content dictated the form. That’s why I feel this work is really native to VR.

JOE: I learned to become a better collaborator and a better dreamer on this project. My work with Yasmin and Michèle on this project has and continues to impact my work on other projects. There were so many huddles to the fulfillment of the vision. External obstacles like money and time are obvious impediments to the work. However, those impediments are always there. The impediments to the creation of impactful art is also internal (psychological). Interpersonal struggles between collaborators and the fear of failure have a huge impact on the work. Yasmin, for example, is the technical backbone of The Changing Same, but also someone with a great receptivity for interpersonal sparing that helped our creativity. We frequently engaged to our own therapeutic process that allowed us to challenge (and trust) each. The personal work leads to better art; more dreaming and more risk-taking. But after all, this work isn’t just about technology. It is a fulfillment of our vision, of our humanity.

MICHELE: For me this process of collaboration across disciplines allowed me to be more confident in my own creative instincts and to treasure the brilliant outcomes that emerge out of creative risk-taking. It’s been life-changing for me as an artist.

YASMIN: The co-creation process was indeed the most enriching experience in the making of this project. We spent a lot of time on the world building phase of the project. The Changing Same is a magical realist afro-futurist time travel experience through 400 years of racial injustice in the United States. Part of our design phase was to define what does magical realism mean in The Changing Same, what will be our approach to Afro-futurism that is rooted in the American context. It was also important that the worlds and the awe-inspiring time-travel mechanic would be rooted in realism (the real world), but everything is a little off.

The inspiration behind The Changing Same is that history is cyclical that racial injustice hasn’t really changed but has evolved. That our legacy of lynching and slavery still shape the US today. Our goal with this project is for the audience to acknowledge our shared history, to bear witness to the past in order to heal and move forward. Though we took a magic realist approach, the story is based on historical events such as the lynching of Claude Neal.

Part of the approach to the world-building and the creation of the virtual worlds was capturing the actual site in the real world where the Claude Neal lynching took place. We sent a team to Marianna, Florida, to do a reality capture shoot and using photogrammetry we captured the landscape and the sites. We then re-contextualized these real-world places and re-imagined them in the world of The Changing Same.

YASMIN: One of the biggest challenges was the production of The Changing Same during the Covid-19 pandemic. The core technique to the project is volumetric filmmaking which requires our Depthkit capture stage, camera operators, sound specialists, multiple actors, and the directors to all be in the same space. And as we all know, the pandemic rendered any production like that impossible. We paused production for months because we thought there was no other way forward. But after George Floyd’s murder and the Black Lives Matter protests in 2020, as creators we had charged energy that we channelled to overcoming this production hurdle.

Our team poured into the project creatively during this time and it evolved in a beautiful way. We also leaned into our skill set of tool-building and creating new workflows, and we built a suite of techniques to pull off a completely distributed and remote production in the winter of 2020.

There is an element of technological research behind the design of the experience. The world-building and its magic-realist characters come from new, merged workflows that people have never seen before. For example, merging motion capture with volumetric capture through Scatter’s own tool, Depthkit Studio, allowed us to create the larger-than-life, ethereal character, Harriet, a 13 foot tall hybrid avatar. The Depthkit Studio, in fact, calibrates data from multiple depth sensors and enables us to record real actors as full-body holograms.

These captured performances are a cutting-edge innovation per se: they were all captured during Covid, in a very safety-compliant work environment. We only had one actor at a time on stage and created our own virtual production technique where we used a live-stream of the actor’s Depthkit capture in-situ of the Unity scene so the actor had an understanding of the placement and environment their character will be rendered in. We found a way forward, despite all the obstacles, and the project evolved creatively.

We’re quite proud of Episode 1 — the strong storytelling, the uncompromising subject matter, the technological innovation and the beauty of the worlds we’ve designed.

MICHELE: I would say two challenges that initially felt like obstacles ultimately worked to our advantage. The hurdles of fundraising for this project – that took five years, in part because we did not choose to compromise on our vision – actually put time on our hands. We took advantage of that time to lean into our creative process, and I think if it weren’t for the years it took we may not have come up with some of our ideas about story and execution. And the pandemic and George Floyd’s murder and the subsequent uprisings across the globe also became an opportunity, and in some ways the timing of the release of Episode 1 worked out for us. 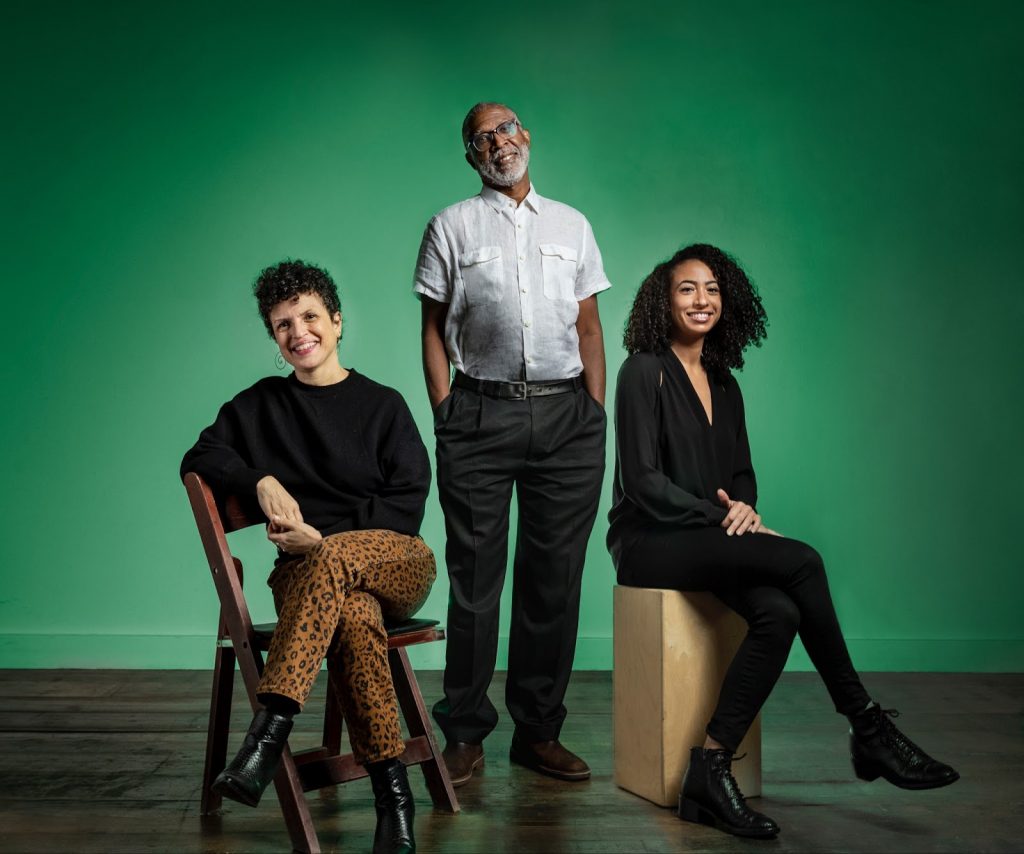 Michèle Stephenson is a filmmaker, artist, and author who pulls from her Panamanian and Haitian roots, and experience as a human rights attorney to tell compelling, deeply personal stories that are created by, for, and about communities of color.

Joe Brewster, M.D. is an American psychiatrist and filmmaker who directs and produces fiction films, documentaries and new media focused on the experiences of communities of color.

Yasmin Elayat is co-founder and CMO of Scatter. She’s an Emmy-award winning immersive director and a USA 2020 Fellow. Yasmin directed Scatter’s Zero Days VR, a documentary about cyber warfare and the Stuxnet virus, which premiered at Sundance 2017 and won the Emmy for Original Approaches: Documentary as well as Columbia DSL’s 2018 Special Jury Prize. Her work has won multiple other awards and has been exhibited at numerous festivals including Sundance, Tribeca, SIGGRAPH, the Festival de Cannes, and the World Economic Forum.

“The Changing Same’s main goal is awareness: past and present connect through significant parallels (see the one between the modern jail and the slave warehouse depicted in the first episode) and to become aware means realizing how the former profoundly impacts the latter. If people, especially those inside the communities this work speaks about, don’t acknowledge this influence, there can be no growth. There can be no change. There can be no utopian, better future”
— Agnese Pietrobon, XR Must